A wave of plastic 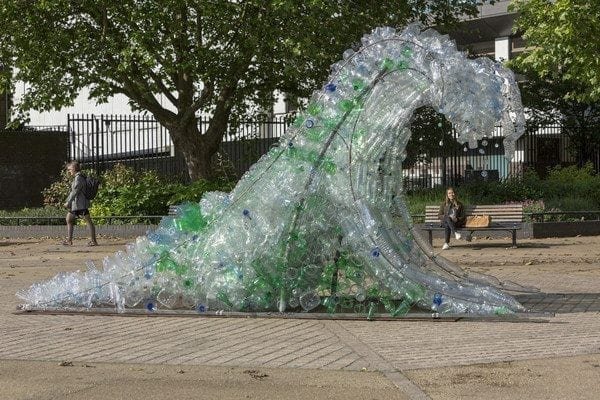 UK adults will use nearly 7.7 billion single-use plastic water bottles this year, adding to the rising tide of plastic pollution, according to new OnePoll research on behalf of water filter brand BRITA.

Despite having very good quality tap water available in every home in the UK, nearly a third of people (30%) admit to using bottled water at home.

‘Single-use plastic water bottles in the seas and on coasts are a menace to wildlife, particularly as they start to break down. They add to the microplastic load of the oceans and can be eaten by animals at all stages of the food chain.

‘It takes 162g of oil and seven litres of water to manufacture a single one litre disposable PET bottle, which amounts to the release of 100g of carbon dioxide (CO2), a major greenhouse gas. This means single-use plastic bottles significantly contribute to pollution, even if they are subsequently recycled.’

To highlight the issue and the MCS Plastic Challenge, BRITA has unveiled a specially commissioned sculpture, titled ‘The Wave’, made from recycled single use plastic water bottles (see main image). The sculpture, currently on London’s Southbank, was created by eco-artist Wren Miller and inspired by Japanese artist Katsushika Hokusai’s famous print, ‘The Great Wave’.

The new research also highlights a growing trend of bottled water consumption among UK children; on average, 22% of 4- to 18-year-olds mainly drink bottled water, despite the fact tap water’s cheaper and readily available. This figure is much higher in some UK regions.

Over half of UK adults (54%) say they would consider using more tap water generally to lessen environmental pollution, however a third of people (32%) buy bottled water but believe they aren’t contributing to pollution because they recycle.

‘The growing use of single-use plastic water bottles among current and future generations, and its contribution to increased plastic pollution in the UK, is a major concern.

‘Communicating issues about wellbeing is something I do every day and I believe that protecting the environment is fundamental to the wellbeing of all of us in the UK.’

Bottled water sales grew by 25% in volume from 2010-2015, reflecting a worrying trend in the number of single-use plastic water bottles used both at home and on the go.

Click here for more information about the MCS Plastic Challenge.