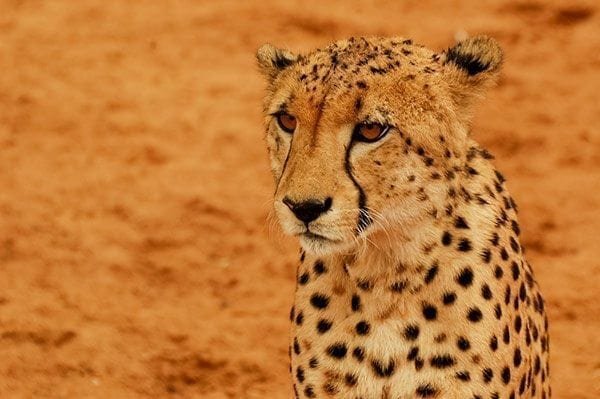 The world’s fastest land animal, the cheetah (Acinonyx jubatus), is sprinting towards the edge of extinction and could soon be lost forever unless urgent, landscape-wide conservation action is taken, according to a study published in the journal Proceedings of the National Academy of Sciences.

Led by ZSL (Zoological Society of London), Wildlife Conservation Society (WCS) and Panthera, the study – which represents the best available estimate for the species to date – reveals that just 7,100 cheetahs remain globally.

Furthermore, the cheetah has been driven out of 91% of its historic range. Asiatic cheetah populations have been hit hardest, with fewer than 50 individuals remaining in one isolated pocket of Iran.

‘We’ve just hit the reset button in our understanding of how close cheetahs are to extinction. The take-away from this pinnacle study is that securing protected areas alone is not enough. We must think bigger, conserving across the mosaic of protected and unprotected landscapes that these far-ranging cats inhabit, if we are to avert the otherwise certain loss of the cheetah forever.’

Due to the species’ dramatic decline, the study’s authors are calling for the cheetah to be up-listed from ‘Vulnerable’ to ‘Endangered’ on the IUCN Red List of Threatened Species.

Typically, greater international conservation support, prioritisation and attention are granted to wildlife classified as ‘Endangered’, in efforts to stave off impending extinction.

‘This study represents the most comprehensive analysis of cheetah status to date. Given the secretive nature of this elusive cat, it has been difficult to gather hard information on the species, leading to its plight being overlooked. Our findings show that the large space requirements for cheetah, coupled with the complex range of threats faced by the species in the wild, mean that it is likely to be much more vulnerable to extinction than was previously thought.’

While renowned for its speed and spots, the degree of persecution cheetahs face both inside and outside of protected areas is largely unrecognised. Even within guarded parks and reserves, cheetahs rarely escape the pervasive threats of human-wildlife conflict, prey loss due to overhunting by people, habitat loss and the illegal trafficking of cheetah parts and trade as exotic pets.

To make matters worse, as one of the world’s most wide-ranging carnivores, 77% of the cheetah’s habitat falls outside of protected areas. Unrestricted by boundaries, the species’ wide-ranging movements weakens law enforcement protection and greatly amplifies its vulnerability to human pressures.

Indeed, largely due to pressures on wildlife and their habitat outside of protected areas, Zimbabwe’s cheetah population has plummeted from 1,200 to a maximum of 170 animals in just 16 years – representing an astonishing loss of 85% of the country’s cheetahs.

Scientists are now calling for an urgent paradigm shift in cheetah conservation, towards landscape-level efforts that transcend national borders and are coordinated by existing regional conservation strategies for the species.

A holistic conservation approach, which incentivises protection of cheetahs by local communities and trans-national governments, alongside sustainable human-wildlife coexistence is paramount to the survival of the species.

‘We have worked with range state governments and the cheetah conservation community to put in place comprehensive frameworks for action to save the species, but funds and resources are needed to implement them. The recent decisions made at the CITES COP17 meeting in Johannesburg represent a significant breakthrough particularly in terms of stemming the illegal flow of live cats trafficked out of the Horn of Africa region. However, concerted action is needed to reverse ongoing declines in the face of accelerating land use changes across the continent.’

The methodology used for this study will also be relevant to other species, such as African wild dogs, which also require large areas of land to prosper and are therefore similarly vulnerable to increasing threats outside designated protected areas.

Click here to find out more about the Rangewide Conservation Programme for Cheetah and African Wild Dogs.