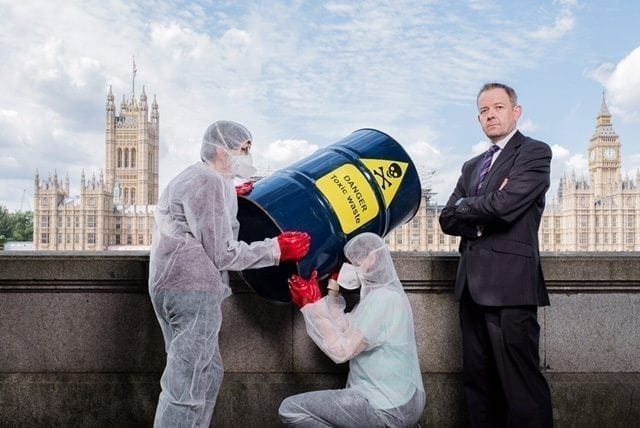 Following comments by new Prime Minister Theresa May about getting tough on irresponsible behaviour by big businesses, a new survey by the UK’s leading fair trade organisation, Traidcraft, reveals more than two-thirds of MPs agree that a few irresponsible UK companies are undermining responsible businesses by their actions in the developing world.

The survey is part of Traidcraft’s Justice Matters campaign, which calls for urgent action by the government to update the law so that UK companies committing corporate crimes overseas can be prosecuted in the UK.

To promote the campaign, Traidcraft Chief Executive Andy Biggs took part in a photo stunt opposite the Houses of Parliament in Westminster, which saw members of the Traidcraft team pretending to dump barrels of ‘toxic waste’ into the River Thames.

‘Traidcraft is appalled that a minority of British companies are getting away with actions in developing countries which would be criminal here.

‘We’re talking about things like destroying livelihoods through toxic pollution, forcing people out of their homes and threatening violence if anyone questions what is going on. We wouldn’t find it acceptable for a British company to dump toxic waste in the Thames, so why should they get away with it in developing countries?’

In her speech to launch her leadership campaign, Theresa May said that she would be ‘getting tough on irresponsible behaviour in big business’ and that despite being the party of enterprise, ‘that does not mean we should be prepared to accept that ‘anything goes’.’

‘We welcome the recent comments of the new Prime Minister when she spoke about getting tough on irresponsible behaviour in big business, and we hope she will make it a priority to update the law so that the worst cases can be prosecuted in the UK.’

According to the Business and Human Rights Resource Centre, there have been 303 allegations of abuse by 127 British companies operating overseas over the last 10 years, but not one resulted in prosecution.

Meanwhile, many cases are thought to go unreported for the fear of repercussions.

Traidcraft is calling for a change in the law to close this loophole and enable the prosecution in the UK of British companies for the actions overseas.

Traidcraft’s Justice Matters campaign invites people to sign a petition to the government which reads:

‘Some irresponsible British companies are abusing or exploiting people around the world and getting away with it. We the undersigned call on the government to update the law so that large complex companies operating in the UK can be prosecuted for the most serious cases of causing harm abroad.’