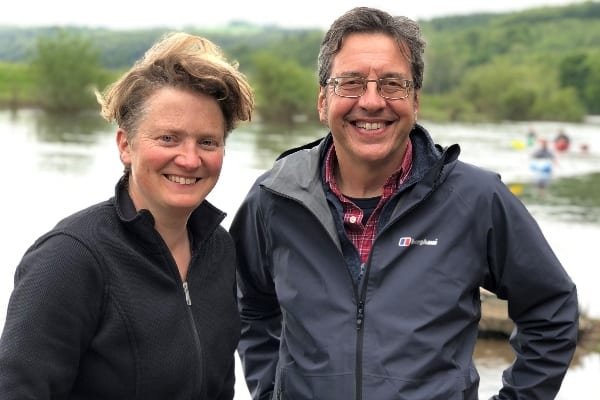 Rivercide, a live investigative documentary on the shocking state of Britain’s rivers, will be streamed live at 19.00 this evening (14 July), with a call to action for viewers to help save their local river.

The documentary is directed by Grierson-winner Franny Armstrong (McLibel, The Age of Stupid) and hosted by leading environmental journalist George Monbiot (author of Feral and Out of the Wreckage, and presenter of Apocalypse Cow).

Singer Charlotte Church is collaborating with poet Owen Sheers to compose an original song for Rivercide, which Charlotte will perform live on the show.

In what the team believes is the world’s first live investigative documentary, Rivercide will combine the best of the live stream formats that we’ve all become familiar with during lockdown, and take them to the next level in a pioneering new format.

This is gutsy environmental investigative journalism that will report the facts and won’t shy away from delivering hard truths.

Director Franny Armstrong is known as one of the pioneers of crowd-funding; her film Age of Stupid raised £900,000 from 330 funders five years before Kickstarter launched.

‘Rivercide is the antithesis of those deathly Zoom calls we’ve all had to endure this last year. Yes, it’s using the same technology, but in spirit it’s the anarchic offspring of Springwatch and Challenge Anneka.

‘You’d be hard pressed to find a single person in this country who actively wants dirty rivers. And yet every single one of the rivers, lakes and streams that’s monitored in England is now polluted. How can that be? That’s the mystery which Rivercide is setting out to solve – live, in real time.”

‘It’s madness that we live in a time of cars that drive themselves and fitbits for dogs and yet we put raw sewage into our rivers and allow 20 million chickens to poo into a single river catchment.

‘After a year of lockdown, we’re now a nation of wild swimmers and nature lovers – just imagine how much more fun we’d all be having if our rivers were safe and healthy again, both for wildlife and for people?’

George Monbiot will challenge politicians and confront polluters, and he’ll also show how we can turn the situation around and help to restore Britain’s rivers to the natural wonders they ought to be.

The live film will also shine a light on the campaigners working tirelessly to turn the fate of our rivers around.

Having crowdfunded the costs of production to enable editorial independence, Rivercide has also crowdsourced intelligence on the state of Britain’s rivers, investigating all forms of river pollution.

‘Our rivers should be beautiful, complex ecosystems. But on our watch, they’ve become open sewers, poisoned by sewage and farm slurry. They’re dying before our eyes.

‘Last year raw sewage was released into English rivers over 400,000 times, for over 3 million hours. The Mogden Sewage Treatment Works in Twickenham spewed 3.5 billion litres of raw sewage into the Thames last year. On one day in October, they spilled over a billion litres, which is the equivalent of over 400 Olympic-sized swimming pools of raw sewage.

‘As well as releasing faecal bacteria and other nasty chemicals into our water, untreated sewage includes pollution in the form of wet wipes and sanitary towels, leading to build-up of microplastics. And yet, nationally, sewage isn’t even the biggest polluter of our rivers. Agriculture is the sector responsible for most river pollution.

‘Rivercide will show how the agencies charged with protecting our rivers have been progressively under-funded and under-resourced and are failing to adequately monitor water quality and enforce action against polluters. For example, at current rates, the average farm can expect to be inspected by the Environment Agency once every 263 years.

‘Despite having special legislation to deal with agricultural pollution of rivers In England since 2018 – the Farming Rules for Water – no fines have been issued under these powers, despite the rules being breached hundreds of times.

‘Rivercide will investigate who’s polluting our rivers and why we’re allowing them to get away with it. We’ll examine acute pollution incidents too – for example the tragic pollution of the Afon Llynfi in Wales which occurred last July, killing over 10,000 fish.’

George and Franny are great believers in people power and hope to attract a large online audience.

George’s previous film about wolves drew an audience of over 40 million, whilst his film with Greta Thunberg attracted over 60 million views. Franny’s film The Age of Stupid, starring Pete Postlethwaite, hit number 1 at the UK box office (by screen average) and won a Guinness World Record for the largest ever premiere.

Rivercide is supporting River Action’s campaign ‘Give Us Back Our Rivers’ which is calling for a doubling of funding for the Environment Agency in England and Natural Resources Wales (the regulatory bodies charged with ensuring environmental regulations are adhered to).

The Environment Agency has suffered very severe funding cuts in the last decade, forcing it to cut back its monitoring and enforcement work.

The Eden Project is backing Rivercide’s call for the British public to set up Friends of River groups to protect their local rivers, organise clean-ups, take part in citizen science monitoring projects, campaign for Bathing Water Status and advocate for natural solutions like wide buffer zones, in which no slurry-spreading or other polluting activities can take place along all rivers.

Only one English river – the Wharfe in Ilkley, Yorkshire – has this Bathing Water Status, compared with 573 rivers in France.

Click here to find out more or to watch Rivercide live at 19.00 on Weds 14 July.