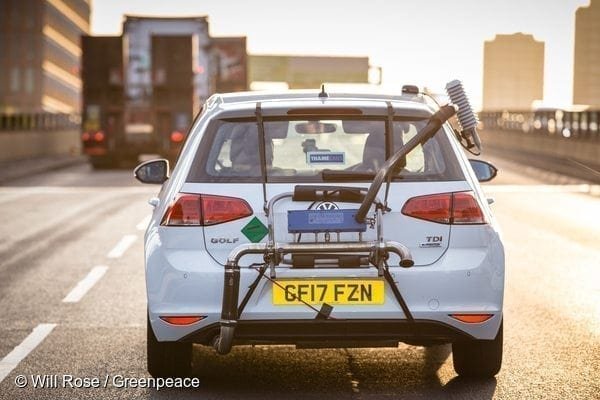 New so-called ‘real world’ emissions tests prompted by the VW scandal still fail to capture the actual impact diesel vehicles are having on air pollution in towns and cities, a new investigation by Greenpeace has revealed.

Independent testing of two new diesel cars was carried out by leading experts Emissions Analytics (EA) on behalf of Greenpeace. The results showed that during testing along urban roads both cars emitted more toxic nitrogen pollutants (NOx) than their own Real Driving Emissions (RDE) results showed, breaking the legal limit of 168mg/km.

Two popular diesel cars – the VW Golf and Vauxhall Insignia – were tested on well-used commuter routes into and out of London during the morning and evening rush hours.

The most concerning examples for each of the cars occurred during the congested section of the route with emissions of harmful nitrogen pollutants (NOx) 42% higher for the Vauxhall Insignia and 118% higher for the VW Golf during that section than levels detected in the urban section of those cars’ RDE tests.

This shows that during stop-start traffic in rush hour, these cars fail to meet the legal standard, pointing to potential flaws in the RDE test and loopholes that allow companies to test at any time of day – avoiding rush hour altogether if they choose to.

Since September 01, all new car models must pass the RDE test as part of the approval process before being put out on the market. The new testing regime requires cars to be driven on the road, rather than in a lab as with previous tests, in three different settings – urban, rural, and motorway.

To pass, the cars must emit no more than 168mg/km nitrogen dioxide (NOx) in both the urban section of the test and overall (when all three results are averaged).

Thanks to industry lobbying, the legal limit for NOx emissions in the RDE test has already been more than doubled compared with the previous 80mg/km lab testing limit.

‘The RDE tests should leave the auto industry no room to hide their cars’ real emissions but our investigation suggests this is not the case. These new tests are not ‘real’ enough to ensure the most polluting cars are kept off our roads. That car companies are allowed to avoid rush hour traffic when testing in urban areas is a major flaw.

‘Instead of wasting more time and money hiding behind tests that still don’t reflect what’s happening in the real world, car companies should switch from diesel to electric and hybrid technology. Ministers cannot rest on their laurels either – these tests do not solve the problem of air pollution which makes a ban on new diesels long before 2040 even more crucial.’

The cars tested, their urban RDE results (obtained by Unearthed, Greenpeace’s investigative news platform), and the results from the EA tests are as follows:

‘The results of the test demonstrate what we expected to be the case based upon our wider testing program. Our testing showed that while improvements are present under some conditions, the results also show that further improvements may be required for both the testing regime and for diesels to manage challenges like London’s rush hour.

‘Other Emissions Analytics testing shows diesels can be cleaner in normal urban and motorway driving. However, the pace of change, or lack of, continues to threaten the future of diesel.’