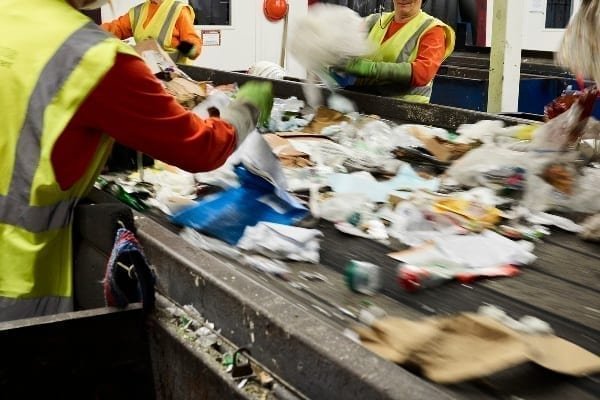 Workers at a major waste firm serving four London councils are putting bags full of recycling straight into incineration bins without checking the contents as they battle to hit targets, an Unearthed and Daily Telegraph investigation reveals.

Staff at waste firm Cory Energy face tough working conditions and are expected to separate general rubbish from recycling in less than two seconds as it races past them on a conveyor belt.

The company, which has seen footage of recycling being put straight in general bins, claims all the material put in those bins for incineration was either contaminated or never suitable for recycling.

One worker described grabbing items off the recycling conveyor belt ‘like a raccoon’ in a bid to meet speed targets but workers also said they were under pressure to ensure the right items were picked.

‘For too long the attitude towards single-use plastics has been: ‘It’s okay, it can be recycled.’ But it’s becoming increasingly clear that relying on recycling to solve the plastic pollution crisis is not okay.

‘This investigation throws up serious questions about staff working conditions at this plant and whether the crucial sorting stage of our recycling system is working as it should.

‘Both people and planet deserve better treatment than this. The government must urgently focus on reducing how much waste we’re producing in the first place.

An undercover reporter worked at Cory Energy’s recycling centre in south London, where staff were tasked with taking items unsuitable for recycling off a conveyor belt and moving it into a separate bin for general waste.

The recycling centre sorts waste for Hammersmith and Fulham, Kensington and Chelsea, Lambeth and Wandsworth councils in London, whose residents make up 11% of London’s population.

Waste from both Hammersmith and Fulham and Kensington and Chelsea councils was found by Unearthed reporters at an illegal waste dump in Malaysia last year.

The joint investigation by Unearthed and the Daily Telegraph found that Cory Energy’s facility is infested with rats and cockroaches.

Its staff are monitored by cameras and are expected to sort each item of waste in less than two seconds. Staff fear that if they miss speed targets or pick the wrong items they may face disciplinary action.

Recyclable materials were put into general waste bins, which get sent to an incinerator that’s also owned by Cory Energy. Whole bags of recycling were sent for incineration without being opened or sorted.

Elsewhere in the plant, staff reported not having sufficient time to remove general waste from the recycling conveyor belt, raising concerns that recyclate may be contaminated.

In a statement, Cory Energy said: ‘Unfortunately, recycling is a dirty job, but it shouldn’t be. No system is perfect and despite all of our efforts, there’s still a lot of education and work required to reduce the contamination that enters the recycling system before it arrives at the MRF [Materials Recycling Facility]. Pests are an unavoidable part of working in a waste facility and we have rigorous hygiene standards and pest control procedures in place.’

Click here to read the full response from Cory Energy.

The company refused to disclose data on the contamination of bales to Unearthed and The Telegraph, citing commercial confidentiality.

Unearthed has reported its findings to the four councils concerned, and has asked Cory Energy what proportion of the waste it sorts is contaminated. Cory Energy declined to share this information.

Click here to read our article on the National Audit Office report on issues around UK recycling.