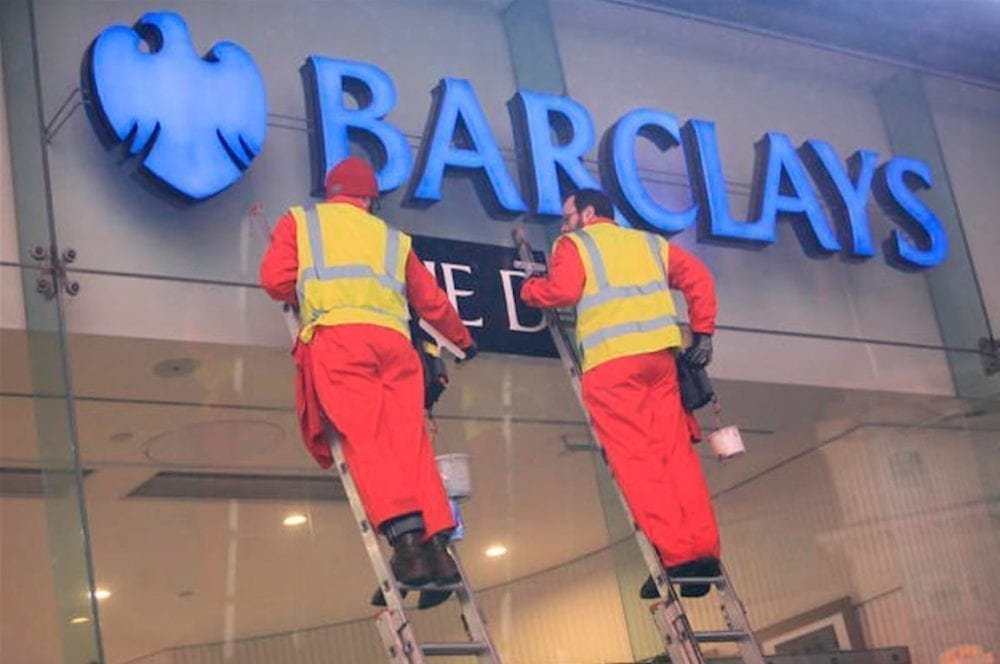 Of the 30,000 Barclays customers Greenpeace contacted about the issue, over 6,000, pledged to switch their accounts to another bank unless Barclays changed their policy on funding pipelines for the Canadian tar sands. Barclays is the last UK bank still offering funding to these pipelines.

Six Greenpeace volunteers arrived at the bank at 07.00 disguised as window cleaners. After giving the windows a quick clean (it’s a very dirty bank), they stuck on a modified Barclays’ logo. It displayed the number of Barclays customers who have signed a Greenpeace petition asking the bank to change its pipelines policy.

As part of an international campaign to stop oil pipelines being built across Canada and the USA to bring oil from Alberta’s tar sands to market, Greenpeace UK launched a petition asking Barclays Bank to follow other financiers across Europe in refusing to fund those pipelines. In response, Greenpeace received a number of emails from people saying they were moving their accounts to different banks because of Barclays’ pipelines policy.

To measure the strength of feeling over this issue, Greenpeace emailed over 30,000 Barclays customers who had signed the petition to ask whether they would consider moving their accounts if Barclays continued to offer funding to the pipelines. So far, over 6,000 have pledged to do so.

‘Moving your bank account is quite a big undertaking, and so we were genuinely surprised when people started doing it without us even suggesting it. This new information shows that the opposition to Barclays funding dirty tar sands pipelines isn’t just broad, but deep. People are prepared to put themselves through a bit of bureaucratic hassle try to persuade their bank to do the right thing, and we’re really grateful to them for showing such commitment.’

The pipelines would enable greater exploitation of the tar sands, which produce some of the dirtiest fuel on the planet. If the tar sands are fully exploited and burned, this would take up 15% of the entire world’s carbon budget if we are to meet the Paris goal of limiting warming to 1.5 degrees.

The pipelines lack the Free Prior and Informed Consent of many Indigenous and local communities as well as posing a serious threat to local ecosystems.

Greenpeace volunteers have been talking to customers about Barclays’ pipeline policy outside over 70 branches of the bank over the last few months.

Want to switch to an ethical bank? Click here to find out why Triodos Ethical Savings Accounts are a MyGreenPod.com Hero