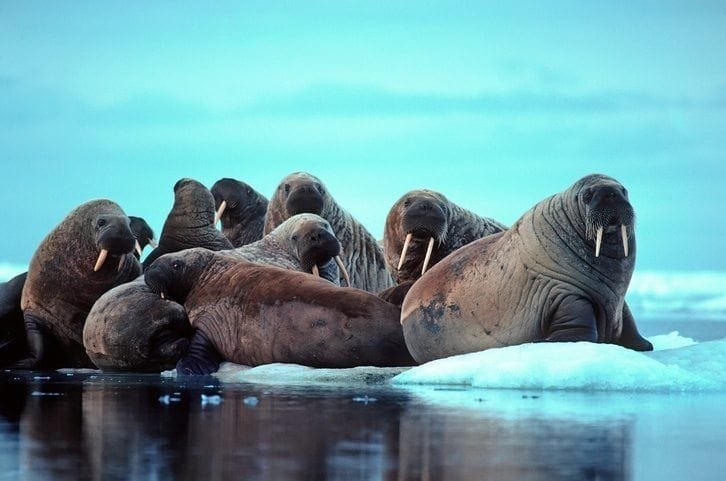 The Arctic Ocean urgently needs protection as melting sea ice is opening up previously inaccessible areas to activities such as shipping, bottom trawl fishing and oil exploration, according to a scientific report.

‘The Arctic Ocean’s beauty and bounty are unparalleled. From the sea life superhighway of the Bering Strait to the breath-taking fjords of Scoresby Sound, this region is unlike any other on the planet. This new report highlights seven possible treasures in the Arctic Ocean that need conservation efforts to keep pace with climate change.’

The report, launched by the International Union for Conservation of Nature (IUCN) in partnership with the US-based Natural Resources Defense Council (NRDC) and UNESCO’s World Heritage Centre, identifies seven globally significant marine sites in the Arctic Ocean that warrant protection and could potentially qualify for World Heritage status.

‘The Arctic Ocean plays a crucial role in shaping global climate and hosts a diverse range of species, many of them threatened.

‘The World Heritage Convention has great potential to increase global recognition and protection of the region’s most exceptional habitats.’

The Arctic Ocean stretches across the northernmost side of the planet, spanning 14 million square kilometres. Its icy waters are home to wildlife found nowhere else on the planet, including bowhead whales, narwhals and walruses.

As one of the most pristine oceans on Earth, it provides critical habitat for threatened species, such as polar bears and Atlantic puffins, both assessed as vulnerable by the IUCN Red List of Threatened Species.

However, climate change is posing a serious threat to the Arctic region, which is warming twice as fast as the rest of the planet. Rapidly melting sea ice is opening up previously inaccessible areas to potential new shipping routes, oil and gas development and industrial fishing.

These changes increase the urgency of improving our understanding and effective conservation of the Arctic’s globally unique marine ecosystems.

The sites identified in the report that could potentially qualify for World Heritage status include:

The Remnant Multi-Year Sea Ice and Northeast Water Polynya Ecoregion
This region boasts the oldest and thickest ice in the Arctic and may give polar bears the greatest chance of survival through the 21st century.

The Bering Strait Ecoregion
One of the world’s great migration corridors for millions of seabirds and marine mammals.

The Northern Baffin Bay Ecoregion
Supports the largest aggregation of a single species of seabird, the little auk.

The High Arctic Archipelagos
Support 85% of the world’s population of ivory gulls.

Disko Bay and Store Hellefiskebanke Ecoregion
A critical winter habitat for the West Greenland walrus and hundreds of thousands of king eiders.

The Great Siberian Polynya
Where the seasonal formation and melting of ice influences oceanic processes on a large scale.

Links to other Heritage sites

Currently, there are five World Heritage sites within the Arctic Circle, only one of which is listed for its marine values – Russia’s Natural System of Wrangel Island Reserve.

Inscribed in 2004, it boasts the world’s largest population of Pacific walrus, with up to 100,000 animals congregating in the island’s rookeries, and the highest density of ancestral polar bear dens.

Research suggests that some humpback whales from the Whale Sanctuary of El Vizcaino in Mexico migrate all the way to the waters around Wrangel Island for summer feeding, highlighting the connections between the Arctic Ocean and World Heritage sites in lower latitudes.

Click here to read the report, ‘Natural Marine World Heritage in the Arctic Ocean: Report of an expert workshop and review process’.