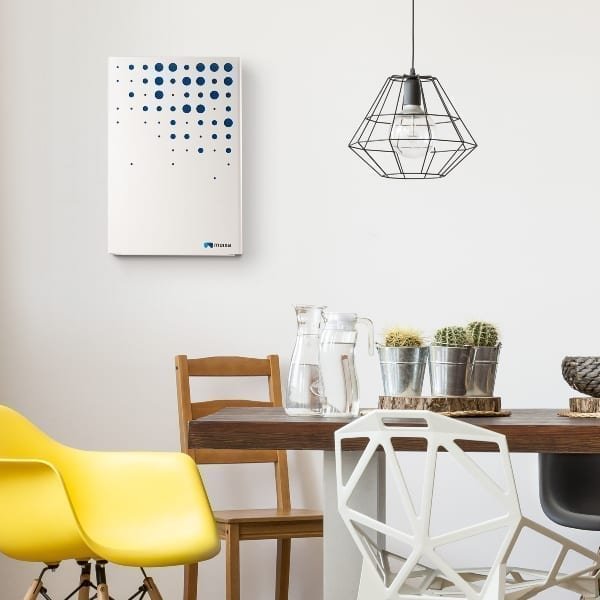 Soon every home will run on batteries. If that sounds like the stuff of science fiction, then you’re missing out on an energy system that slashes bills, reduces carbon emissions and improves energy security using award-winning smart technology.

Battery-powered homes already exist so this isn’t a blueprint for the future – though Simon Daniel, founder of energy storage business Moixa, has always been ahead of the curve. In 2003 and 2004 he and co-founder Chris Wright visited Silicon Valley to sell patent licenses for three inventions. ‘We met Apple, Microsoft and Logitech, but realised our products – which included a rollable tablet, a modular smartwatch and a flexible mouse – were way ahead of their time’, Simon remembers. It took another five years for Apple to launch a solid tablet and 10 years for its smartwatch to come to market; Microsoft didn’t release its Arc Mouse, which flattens to fit neatly into your pocket, until 2010.

Though at the time the world wasn’t ready for these products, Simon made an important observation while prototyping and 3D printing the flexible tablets and smartwatches. He realised that embedded batteries would be an ongoing problem for all future mobile and ‘internet of things’ devices that need power. In 2006 he decided to concentrate on smart energy and batteries, and within six months he’d invented, developed and launched a new AA battery that charged via a USB port. The USBCELL, which has won a top iF Gold design award, has topped a million sales and helped to fund research into home batteries.

WHAT IS A HOME BATTERY?

The Moixa Smart Battery is a small (50x30x20cm) unit that sits under the stairs or in the garage; in the hands of an experienced, accredited installer it can be fi tted in less than two hours. It’s charged either directly from solar panels during the day or using cheap electricity via Economy 7 at night. ‘Customers will not notice anything different’, Simon tells us, ‘other than the size of their electricity bill.’

A full solar and battery package, which includes a combined 2kWh Smart Battery and 2kWh PV system, will cost around £5,000 – though the price will be significantly lower if, like around half of Moixa’s customers, you already have solar panels on your home.

The payback time will depend on the house and the size of its roof, but as an example a customer with a large roof who uses electricity throughout the day can draw around 65% of their energy from solar and battery, representing a saving of around £350 on a typical bill. ‘Some of our customers are saving 70% on their electricity bills’, Simon tells us. ‘They will also earn 20 years of Feed-in-Tariff payments, and Moixa will pay a minimum of £50 per year if they make their battery available for Gridshare.’ This grid-sharing service enables all Moixa’s batteries to be managed as a Virtual Power Plant (VPP), and customers with excess power stored in their batteries will get a share of the profit Moixa makes by selling it to the National Grid.

Moixa already has 1,000 UK customers, but the aim is to install smart batteries connected to solar panels into a million UK households, then aggregate them with other batteries to create a collective grid service to help lower customer bills and overall system costs.

A BATTERY FOR EVERYONE

While Moixa’s competitors focus on a demographic Simon calls the ‘niche early adopter’ – those with plenty of money and off -grid homes – Simon made a conscious decision to concentrate initially on people with ‘normal-sized’ houses – particularly those in urban housing. ‘Our product is different in that it focuses on the mass market, urban consumer’, Simon explains. ‘It’s for everyone’.

There are 25 million homes in the UK that don’t currently have solar, for reasons varying from architectural barriers to plain and simple cost. Simon is most interested in the 850,000 homes that have solar, plus the million homes that could have solar plus storage installed over the next few years. ‘There’s amazing potential for new modular housing and social housing’, Simon tells us. ‘These systems make solar make sense. They can help to lift people out of fuel poverty while maximising the carbon and monetary savings provided by solar.’

Price hikes from energy companies, combined with a growing awareness of climate change, make Moixa’s home batteries a compelling solution for many homeowners. Customers are drawn to the prospect of self-sufficiency and attracted to the idea of becoming less reliant on the grid, as well as saving carbon and being able to observe their energy habits using Moixa’s portal. Customers who use a lot of energy have also enjoyed seeing an immediate cost benefit that’s reflected in lower energy bills.

But as well as helping to cut household expenditure and slash emissions, Simon is interested in the role a smart battery can play in a home. ‘By being wired in and present over decades it becomes a permanent part of a house, and we can use our smart algorithms to learn and make recommendations to households over time.’ Simon calls this ‘slow data’ – not big data – as over time the information can be used to provide a quantitive analysis of value that can in turn save customers money. ‘We expect to outlast many faster moving, disposable technologies like phones, broadband routers, smart energy displays and thermostats because we’re part of the household energy system, delivering energy or storing solar energy to save money’, he adds.

The bigger goal at Moixa is to use the experience, patents and technologies acquired during the development of home batteries to manage all the world’s batteries – whether they’re powering electric vehicles or connected consumer products. ‘We think we can lower global energy and carbon costs by managing when products are charged’, Simon explains.

For now, the focus is on a Smart Energy Island project; Moixa has won a £1.5m chunk of a £10.8m fund to transform the energy system of the Isles of Scilly. ‘There’s a single connector to the mainland which occasionally breaks’, says Chris Wright, Moixa’s chief technology officer, ‘so it’s highly exposed to prices and connectivity, relying on diesel as back-up.’ The Moixa project will manage batteries and electric vehicles in homes and demonstrate how a ‘smart island’ – or smart city – can manage local resources. ‘This is essential given the UK is itself an island with small interconnections to the ‘mainland’, or EU, which are about to be disrupted’, Simon tells us. ‘So what we learn and prove on the Isles of Scilly could apply nationwide.’

Click here to find out more about Moixa’s Smart Batteries.