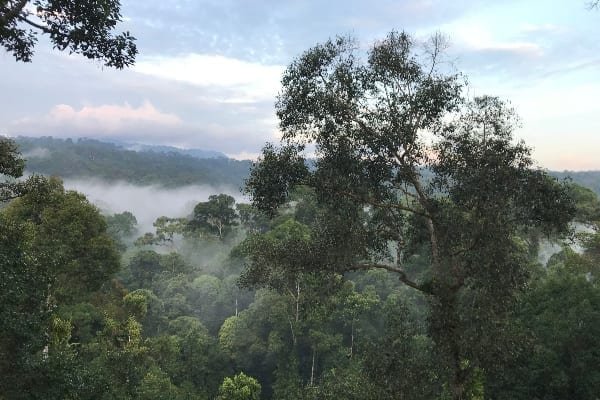 Let us start with three vignettes: the first, in a pub in Suffolk; the second, in a boat on Borneo’s Kinabatangan River and the third, on a ruined rice paddy in Kerala, India.

It was a little more than 20 years ago. My new neighbour, Pete Wilkinson, had been a Greenpeace man in the Antarctic, so he had some conservation street cred all right. He introduced me to another neighbour, John Burton, in our local pub. We had the what-do-you-do? conversation.

John told me he bought land. Land with rainforest on it, for example. It’s all very well trying to save tigers and elephants and orangutans, but if you don’t save the land they live on, you might as well not bother. And once you’ve got it, and it’s yours, no one can do anything bad to it, can they? Save the land and you save the life on it. The simplicity of genius. I was so impressed I bought him a pint.

What would you do with £1m?

Some years later, I was travelling down the Kinabatangan River with Isabelle Lackman, CEO of the Malaysian NGO Hutan. I could, I suppose, tell you how fabulous the place is, but I’d need as many words as there are species in the rainforest.

Isabelle, what would you do if you had a million pounds? She laughed. And then she showed us an area of riverside forest, an area that joined up the land already owned by Hutan and which is managed by and for the local community. It was a stunning area: perfect forest. All that was needed to safeguard it for ever was a million quid.

A year later, the land was ours. I mean, the land was hers. I mean, the land was in the hands of the local community. I mean, I think, that the forest had been restored to itself: safe, out of danger, able to continue with its essential job of sheltering hornbills, providing income for the people of Kampung Sukau, soaking up carbon and transpiring oxygen into the Earth’s heated and depleted atmosphere.

A year or two earlier, I was walking across a stretch of cultivated land that lay between two areas of forest in Kerala. John and I were both there, flanking Vivek Menon, CEO of the Wildlife Trust of India.

‘Look at this land!’ Vivek was saying. It bore unmistakable signs of elephants: huge loaves of their dung, what remained of the crops trashed, the human dwellings already falling down.

‘Look at this land! It is ruined! And I – am – so – happy!’ This land was a historical elephant route, and the people who lived there suffered as a result. Now the village had agreed to move, voluntarily, to a place away from elephants, where they could grow spices and move into beautiful new accommodation – and the land could return to what it always was: a corridor for elephants, making the two once-separated chunks one forest again. And if an elephant can go through a corridor, so can everything else.

WHAT YOU CAN DO

A row about Brexit. A row about Donald Trump. A row between politicians about who’s boss. And all the time, the most urgent topic of them all – the planet’s decreasing ability to sustain life – hardly gets a look in.

And in this depressing landscape, it is natural to wonder: is there anything at all I can do about it? Or do I have to leave it all to those politicians? Is there anything I can do other than not buying plastic water bottles? Yes there is.

A contribution to the World Land Trust brings about that rare double win: money that makes you feel better about the world and yourself, and money that will actually do some serious practical good.

It’s all about trust

The organisation that made that possible, the organisation that John Burton co-founded, is the World Land Trust. I am coming to the end of my second spell as a council member. I have visited many of the projects the Trust backs, supports and helps to finance.

The more time I spend with the organisation and the more projects I visit, the more I understand the truth of what Sir David Attenborough said: ‘The money that is given to the World Land Trust, in my estimation, has more effect in the wild world than almost anything I can think of.’

So let us clarify. The Wold Land Trust is about acquiring land of conservation value. How much does it own? Overseas, not so much as a square centimetre. Not a single leaf of a tree in a rainforest. To do so would be wrong: not only morally, as in neo-colonialism and all that, but also in most places where the organisation operates, it is against the law for a foreign organisation to acquire land.

Land is big stuff, as Mark Twain and/or Will Rogers pointed out. But a locally based organisation can own land and manage it. The Trust works by establishing a partnership with a local NGO: one that has shown itself to be transparent, ethical and totally trustworthy. The partner buys and manages the land, and the Trust makes it possible.

It’s about working with the local communities. You can’t impose conservation. You can’t come steaming in from the outside and enforce your own values on people. I spoke to the villagers who had moved away from the elephants and asked what they thought. I got the answer in Malayalam, and it translates as ‘It’s a no-bloody-brainer.’

This trust is what, across 30 years of existence, has allowed the organisation to punch way above its weight. A boxer who punches above his weight is able to do so because of timing, flexibility and agility, rather than brute strength.

Let us close by ascending a mountain in Armenia. The journey began at the bottom in wild rose-gardens with streams flowing through them. It continued through the impossible colours of the alpine meadows, where an expert once found 60 species of butterfly in a day, and finally to the limestone pavement at the top.

I sat. I could hear the fall of rock as bezoar goats performed crazed feats of mountaineering. I could look down – look down! – on flying lammergeier, the great soaring giants of the mountains.

I looked across at this great, wild expanse of land, where leopards still live their secret lives, and I thought: yes. Here is a small part of the vulnerable world that has been made safe. Safe for butterflies and goats and leopards: safer too for future humans. Like an awful lot of other places across the world where the trust has been at work.

Click here for more information about World Land Trust projects and how to support them.