Champion of the Earth 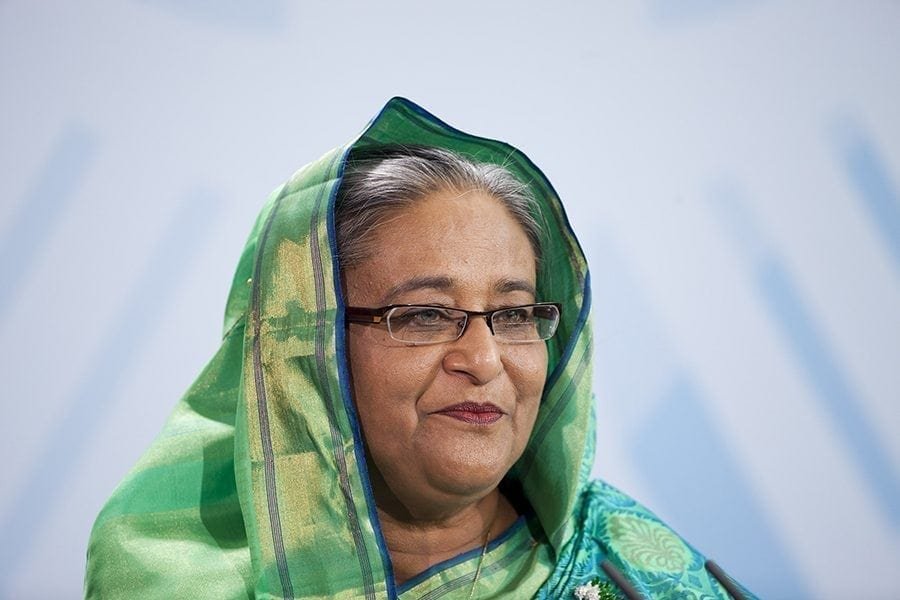 The Prime Minister of Bangladesh, H.E. Ms Sheikh Hasina, has been announced as one of the winners of the United Nations’ highest environmental accolade, in recognition of Bangladesh’s far-reaching initiatives to address climate change.

With a population of more than 159 million, Bangladesh is one of the world’s most populated countries. It is also one of the most vulnerable to the impacts of climate change.

Cyclones, floods and droughts have long been part of the country’s history, but they have intensified in recent years.

‘By 2050 it is estimated that one in every seven people in Bangladesh is likely to be displaced by climate change, and they are also likely to move to urban centres already burdened with meeting the needs of a dense population.’

Serving as Prime Minister of Bangladesh – one of the world’s least-developed countries – Sheikh Hasina has proven that investing in climate change is conducive to achieving social and economic development.

‘From 1990 to 2008 Bangladesh averaged annual losses of 1.8% of the country’s GDP due to natural disasters, yet it is important to remember that addressing the impact of climate change is more than just a question of economics. High tides in coastal areas of the country are rising faster than the global average, which leads to loss of livelihoods and displacement.’

The Champions of the Earth award in the Policy Leadership category, which the Prime Minister will accept at a ceremony in New York 27 September 2015, recognises Bangladesh’s first-off-the-block initiatives under Prime Minister Hasina’s government to prepare the ecologically fragile country for the challenges it faces from climate change.

‘Prime Minister Sheikh Hasina has demonstrated leadership and vision in both making climate change an issue of national priority and advocating for an ambitious global response.

‘As an early adopter and advocate of climate change adaptation policy, she continues to be an example to follow as world leaders seek to take action on climate change as part of the Sustainable Development Goals and the Paris climate conference in December.’

The award cites the progressive Bangladesh Climate Change Strategy and Action Plan of 2009, which was the first such coordinated action plan framed by a developing country.

Bangladesh is also the first country to set up its own Climate Change Trust Fund supported by nearly $300 million of domestic resources from 2009-2012.

The government currently earmarks 6-7% of its annual budget – around $1 billion – on climate change adaptation, with only 25% of this coming from international donors.

A ‘Climate Change Fiscal Framework’ is also in the works to enable the government to track the demand and supply of climate change funds. For the first time, climate change is no longer merely an additional demand, it is central to the country’s development prospects.

Under Prime Minister Hasina’s leadership, the Bangladesh Constitution was amended in 2011 to protect the environment and natural resources for current and future generations.

Prioritised alongside wetlands and wildlife in the constitution, Prime Minister Hasina’s forestry policies initiative has provided a natural barrier from some extreme weather events. The country’s forest cover has also increased by almost 10%.

Preparing for the future

Moving beyond physical and capital investment in climate change adaptation, the government is implementing a wide range of measures to help citizens prepare for an increasingly unpredictable future.

As part of climate change mitigation, the government is giving high priority to clean and renewable energy, including one of the world’s largest solar home energy systems, which covers 10% of the off-grid population, and reducing emissions from brick-making, one of the largest sources of stationary emissions in the country.

In a major initiative to protect environment, human health and livelihoods, legislation is being enacted to step up regulation of the coastal polluting from the ship-breaking industry, which employs a huge workforce in hazardous conditions.

‘As one of the most disaster-prone countries in the world, Bangladesh understands the importance of addressing the impact of climate change. The country is already experiencing its detrimental effects, and it is often the poorest and marginalised who feel it most.

‘I congratulate the Government of Bangladesh for being proactive in tackling climate change as a priority of the country. It is also a clarion call for the global community to take action today, and to realise that climate change is not a problem of the future, it is already happening in our lifetime.’

Champions of the Earth

The annual Champions of the Earth award is the highest environmental accolade that the United Nations can confer upon outstanding individuals and organisations.

Previous laureates of this inclusive award range from leaders of nations to grassroots activists – all visionaries whose leadership and actions bring us closer to environmental sustainability and a life of dignity for all.

To date, Champions of the Earth has recognised 67 laureates in the categories of policy, science, business and civil society.

Other winners will be announced throughout September. The awards will be handed out at a Gala Ceremony at the close of the Sustainable Development Goals summit, on September 27.

Click here to find out more about Champions of the Earth.