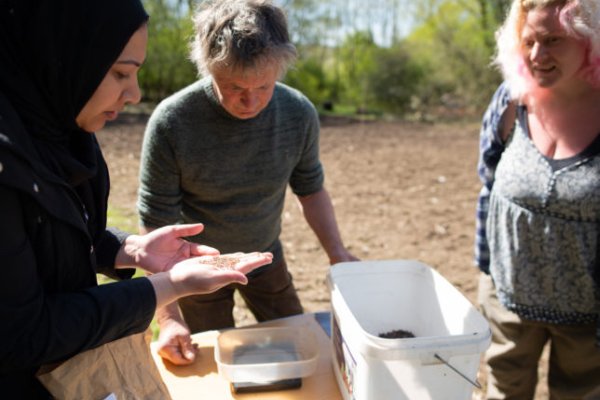 Over £6 million was yesterday (25 January) awarded to communities across the UK to tackle the climate emergency.

The funding, made possible thanks to National Lottery players, has gone to 21 community-led projects focused on waste and consumption.

The grants come from The National Lottery Community Fund, the UK’s largest funder of community activity.

They include £150,000 to Circular Fashion Economy in Norwich, to expand its successful clothing-swap shop concept across Norfolk, and £150,000 to Groundwork South and North Tyneside to create a ‘repair and reuse’ culture within the local community.

Communities’ Reduce, Reuse and Recycle in Edinburgh is also benefiting from £150,000 in National Lottery funding, enabling it to support local people to reduce their waste and consumption habits while diverting items from landfill.

This new community funding comes as recent National Lottery research found that four in five adults in the UK (79%) think local communities are responsible for taking action on climate change.

The research also found that half (54%) of people are worried about the impact of climate on their local community.

‘We know communities have a big role to play in responding to the climate emergency. That’s why, thanks to National Lottery players, we are pleased to be supporting community-led action to address waste and consumption. These projects will bring people together to create a lower waste society, that will not only help us get to net zero, but also support communities to prosper and thrive.’

One of the projects to receive National Lottery funding is Circular Fashion Economy in Norwich, which will use £150,000 to build on its successful clothing swap shop.

It hopes to involve over 15,000 local people and put over 80,000 items of clothing back into circulation, avoiding landfill.

The project will also run a local ‘Sustainable Conference’ to showcase how Norfolk residents, business and charities can reduce waste.

‘Thanks to National Lottery funding, the Circular Fashion Economy Project will enable more people to reduce their textile waste. By encouraging the wider public to put used clothing back into circulation for something in return, we are offering an alternative shopping experience which gives everyone in the community an opportunity to contribute towards reducing the negative effects of climate change.’

The group hopes to create a circular economy – extending the lifecycle of items and appliances such as fridges by reusing, repairing and recycling products for as long as possible.

‘As a society, we are quick to look for new items, particularly when it comes to needing new furniture and household items. However, with this new funding, thanks to National Lottery players, we can develop our pre-used household furniture outlet and encourage people to reuse and repair items.’

Based in Edinburgh, Communities’ Reduce, Reuse and Recycle – a partnership between Edinburgh and Lothians Regional Equality Council Limited (ELREC) and Networking Key Services (NKS) – has received £150,000 to work with local ethnic minority communities, helping them to change their waste and consumption habits.

In a joint statement, Jean-Matthieu Gaunand (ELREC) and Naina Minhas (NKS) said: ‘We are delighted to have received National Lottery funding from the Climate Action Fund. We hope to encourage and support ethnic minority communities in Edinburgh to reduce waste, increase reusing and repairing, and shift to more sustainable consumption.

The 21 awards have been funded through The National Lottery-funded Climate Action Fund (CAF), a £100 million fund aimed at reducing the carbon footprint of communities and supporting community-led movements that demonstrate what is possible when people take the lead in tackling climate change. This is the second round of funding through CAF, which awarded 23 grants in 2020.

Most of the funding announced is for emerging ideas to engage different communities and to test new approaches.

The National Lottery Community Fund will continue to learn from this funding to help shape what happens next with the Climate Action Fund and will explore and reflect on the ways people and communities are taking climate action throughout the programme.

Thanks to National Lottery players, since 2016 £397 million has been awarded through more than 6,000 grants, which involve environmental action such as action on waste and consumption, energy, transport, food and the natural environment.

National Lottery players raise £30 million each week across the UK for good causes.