Dominos, Next and Sports Direct among the 70% of companies failing to disclose their impact on the world’s forests 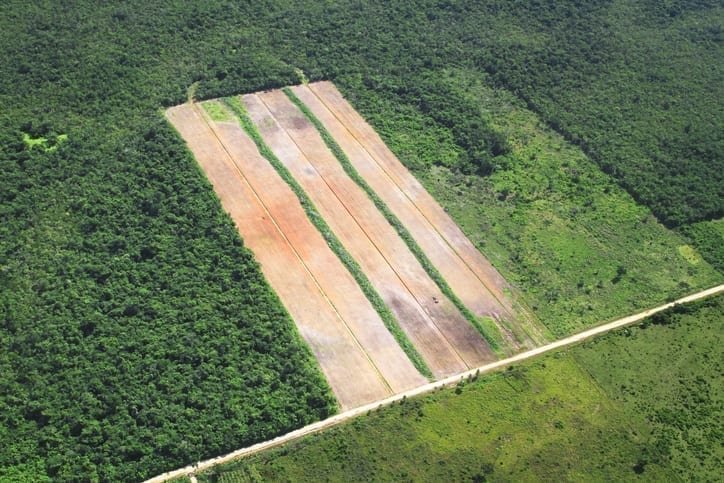 A large majority of major corporations are failing to be transparent about their impacts on global deforestation and many are taking inadequate steps to tackle it, according to a new report released by environmental non-profit CDP.

Over 1,500 companies deemed to have a significant impact on deforestation – or to be susceptible to deforestation risk – were requested by investors and large purchasing organisations to disclose forests data through CDP’s reporting platform in 2018. 70% failed to do so.

Over 350 companies have declined to respond for the last three years (2018-2016), including major consumer-facing brands like Dominos, Next and Sports Direct along with global food corporation Mondelez and its palm oil supplier Rimbunan Hijau Group, the largest palm oil company in the rainforest region of Sarawak, Malaysia.

These companies use commodities that drive deforestation, for example through their procurement of palm oil for inclusion in chocolates, leather for shoes, paper for pizza boxes and timber for furniture, as forests are cleared for cattle ranching, plantations or agriculture.

CDP’s new report, The Money Trees, finds that corporate transparency on forests (30% disclosure rate in 2018) lags behind other environmental issues such as climate change and water security (both 43%).

This is despite significant risks to business from deforestation, the ecological importance of forests and the role they must play in solving climate change, as well as the heightened environmental concern among investors, buyers and consumers.

‘The silence is deafening when it comes to the corporate response to deforestation. For too long corporations have ignored the impacts of their supply chains on the world’s forests and have not taken seriously the risks this poses – both to their business and the world.

‘Environmental concern is at an all-time high, and companies are being demanded to be transparent and take decisive action to protect forests. Consumers increasingly want to know that their shopping basket isn’t driving the destruction of the Amazon, extinction of the orangutans and the climate crisis.

‘Businesses that want to maintain market share need to listen to the calls from their customers, investors and consumers -–or they could face a backlash. Companies are already telling us reputational risk is the top risk they see from deforestation and this is likely to become ever more prominent as sustainable consumption trends continue and the market shifts.’

A total of 306 companies disclosed forests data to CDP in 2018, reporting on their sourcing of timber, palm oil, cattle and/or soy and the actions taken to reduce deforestation in their supply chains.

Analysing these companies’ responses, the report reveals the level of action is insufficient to solve the problem of deforestation. This is despite damage to brand reputation from links to deforestation being the most frequently cited risk in the report.

Around a quarter (24%) of companies are either taking no or limited action on deforestation, for example by focusing on only one commodity instead of all commodities within their supply chain.

The data also show over a third of companies are not yet working with their suppliers to reduce deforestation. This is a critical gap as deforestation is almost always a supply chain issue, unless the company is a direct producer.

Companies report a potential $30.4 billion in losses due to the impacts of deforestation risks, such as brand damage, regulatory change and physical impacts like forest fires and crop failures.

Yet this is only the tip of the iceberg, as only around a quarter of companies reported financial figures for potential losses.

The data also show that nearly a third of companies do not even include forest-related issues in their risk assessments. However, among companies that do, almost all (92%) see substantial risks, suggesting that the business risks and financial impacts associated with deforestation are underreported.

Nearly 450 companies and more than 50 governments have pledged to end deforestation by 2020, but industry action to date has not been enough to achieve this, with companies recently publicly stating that this deadline will be missed.

Global forest loss continues at a rate of 5 million hectares a year, or 15 football pitches every minute. Turning this trajectory around is essential to address the climate crisis, with the IPCC’s special report on 1.5°C highlighting the need to use forests as carbon sinks.

CDP’s report also finds there are some companies leading the way, implementing numerous actions including engaging with their suppliers on the protection of forests.

For example, global beauty giant L’Oréal and German consumer goods manufacturer Beiersdorf AG are leading on the sustainable sourcing of palm oil. To encourage its suppliers to manage their forest footprint, L’Oréal has developed its Sustainable Palm Index, to assess suppliers’ commitments and achievements in fighting deforestation.

CDP data show that for the companies willing to move the needle on forests, there are major opportunities up for grabs. 76 companies reported business opportunities – such as increased brand value and product innovation – valued at $26.8 billion, more than half of which are rated highly likely or virtually certain.

Click here to find out how you can take part in a restoration revolution.