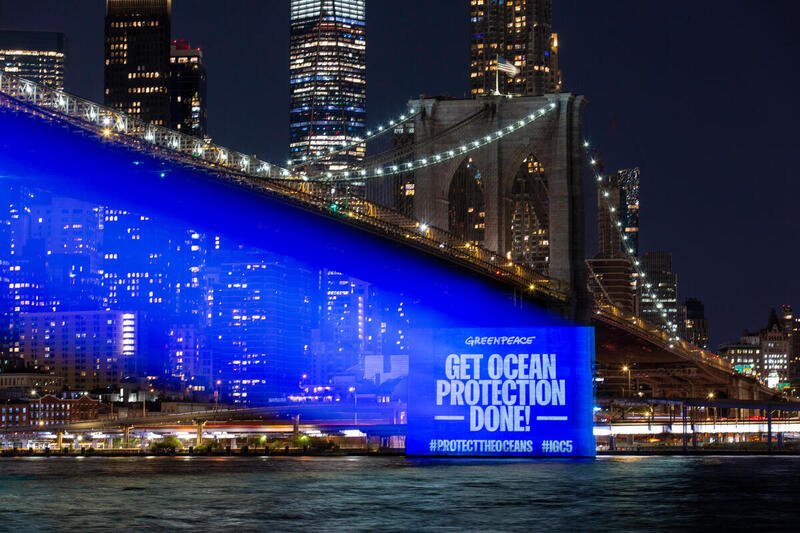 Main image: Greenpeace USA activists projection on Brooklyn Bridge, on the eve of the IGC5 negotiations at the UN ©  POW / Greenpeace

UN Ocean Treaty talks have failed to reach agreement on a Treaty that can deliver Ocean Sanctuaries across 30% of the oceans by 2030, despite significant progress being made during the final 48 hours.

High Ambition Coalition countries did not do their homework on time, and moved towards compromises on key issues like finance far too late, jeopardising all other progress made at this round of talks.

As a result, unless Ministers convene an emergency meeting to conclude negotiations in 2022, the High Ambition Coalition and others like the US have failed to deliver on their commitment to finalise a Treaty this year.

’Time is running out’

The negotiations have now been suspended, requiring a further round. Time is running out to finalise a Treaty that can deliver Ocean Sanctuaries that can protect 30% of the world’s oceans by 2030.

11 million square kilometres of ocean must be protected annually between now and 2030 to protect 30% of the world’s oceans in the timescale scientists say is necessary.

For that, a Global Ocean Treaty must be adopted – with no delays – this year.

‘The oceans sustain all life on Earth, but for the last two weeks, the self-proclaimed High Ambition Coalition has not shown enough ambition or urgency until the final hours. As a result, they have failed to deliver a strong Global Ocean Treaty that can protect the high seas. They promised a Treaty in 2022, and time has all but run out. They shouldn’t shoulder all responsibility, other countries have been deliberately obstructive, but failure to deliver a Treaty at these talks jeopardises the livelihoods and food security of billions of people around the world.

‘While progress has been made, particularly on Ocean Sanctuaries, members of the High Ambition Coalition and countries like the USA have moved too slowly to find compromises, despite their commitments. Time has run out. Further delay means ocean destruction. We are sad and disappointed. While countries continue to talk, the oceans and all those who rely on them will suffer.’

While some groups, like the Pacific islands and the Caribbean group, have pushed hard to bring the Treaty across the finishing line, Global North countries have only started working to reach compromises in the final days of negotiations, after it was revealed that negotiations were on the brink of collapse on the morning of Thursday 26 August.

Russia has also been a key blocker in negotiations, refusing to engage in the Treaty process itself or attempting to compromise with the European Union and many other states on a wide range of issues.

Without a Special Emergency Session to conclude Global Ocean Treaty negotiations before the end of 2022, it will be challenging to protect 30% of the world’s oceans by 2030 – the 30×30 target that scientists say is the minimum needed to give the oceans space to recover.