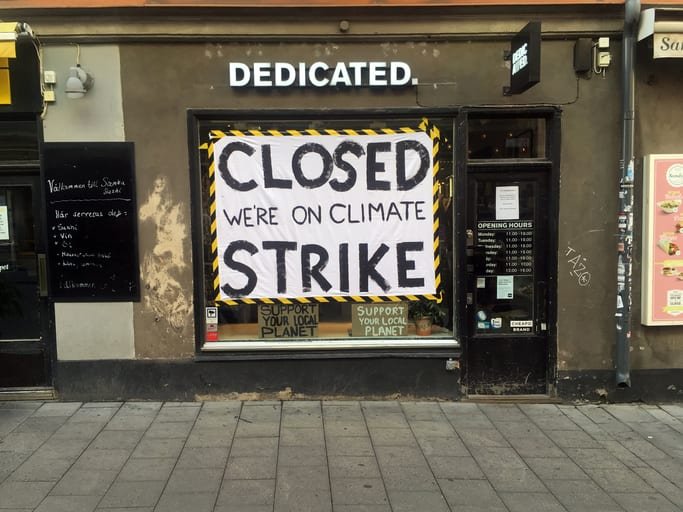 In the midst of the various public health, sociopolitical and economic crises that the world continues to face this year, climate activists continue to fight back with today’s Global Climate Strike.

Strikers are demanding immediate, concrete and ambitious action from world leaders in response to the ongoing climate crisis.

The urgency of action

Part of what the strikers want to highlight in the strike is the urgency of immediate action in the face of the weather- and climate-related disasters that have already devastated various countries this year.

From the winter storm in Texas, which took the lives of at least 82 people, to the current forest fires in Argentina, in which 40,000 hectares have been burned so far, the climate crisis is taking an increasing toll on communities and ecosystems worldwide.

For this reason, activists raise an alarm that concrete actions should be prioritised over of far-off climate targets.

‘Actual emission reductions and net emission reductions are not the same, as the latter allows for compensation of continued emissions with insecure methods, such as tree planting, and are reliant on technology that frankly doesn’t exist in the scale required. Scientists clearly state that what we need isn’t meaningless net zero targets filled with loopholes — what we need are transparent, legally binding targets that take in account the aspects of justice and equity.’

Despite all the climate calamities, climate activists, instead of being listened to, are being silenced.

We’ve seen the persecutions and arrests of climate and environmental activists from India, Uganda, the Philippines, the Netherlands and more.

‘World leaders know that young people fighting today’s system are a threat to preserving the status quo. However what they do not know is that silencing activists is only a sign of weakness, not power; each instance of persecution makes our movement stronger, because when an individual gets arrested, the whole collective movement unites and stands behind them.’

The strikers drafted a suggested list of immediate action points alongside their call for #NoMoreEmptyPromises.

‘We are telling those in power that enough is enough. They’re failing to realise that everything is structurally connected, and with their too little, too late decisions they are also digging their own grave, but the first to fall will not be them, but the most vulnerable communities. We need immediate action now and we will accept nothing else.’

For over two years now, youth climate activists from around the world have been striking and taking to the streets to demand climate justice.

Now, with the Covid-19 pandemic, the actions will be taking on different forms in different places, but their call for #NoMoreEmptyPromises is uniting people beyond borders under the same goal of immediate climate action.

In line with their first immediate action point of divesting from the fossil fuel industry, climate activists from over 10 countries held their strikes in front of Standard Chartered Bank’s offices in their country.

‘Standard Chartered Bank is a climate killer. They continuously fund the destruction in my country by lending money to coal companies that destroy my present and my future. We just experienced the biggest floods in South Kalimantan in the past 50 years and it occurred because of the deforestation done by coal companies, like Adaro Energy who is funded by Standard Chartered Bank. This needs to stop.’