STEVEN GLASER, ECO-RALLY FOUNDER AND AUTOMOTIVE TECHNOLOGY EXPERT, WENT TO FRANKFURT TO GET A CLOSER LOOK 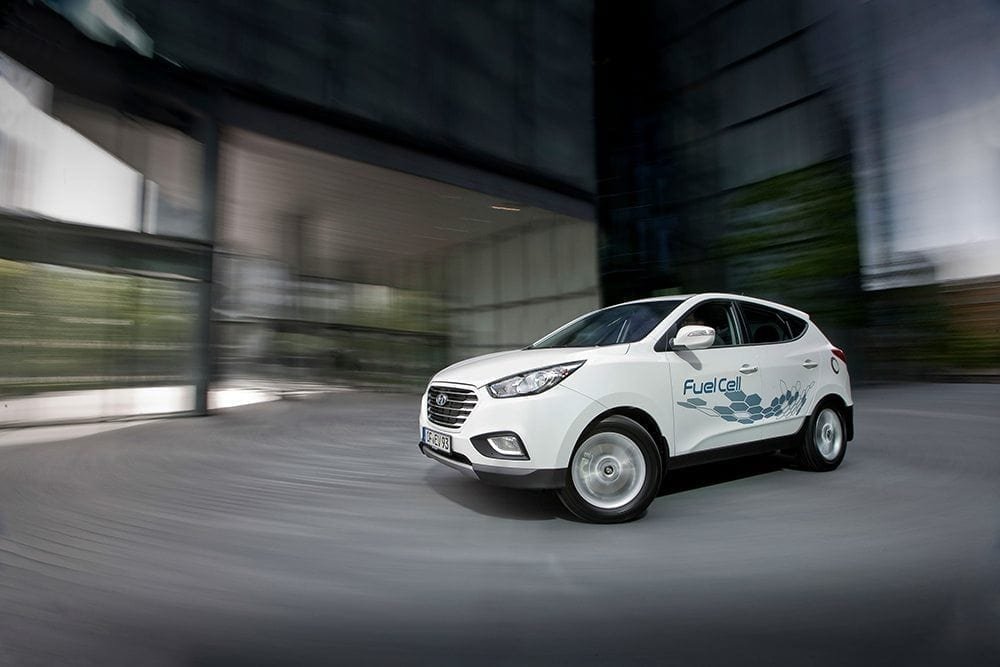 Last February, the world’s first assembly line production of zero emissions fuel cell vehicles began – and the Hyundai ix35 Fuel Cell was born. Could mass production be a game changer for the eco car market as it was for conventional cars, and is this the best technology to be backing?

In the blue corner (like other manufacturers, Hyundai has branded its ‘green’ sub-brand ‘blue’, with a Blue Drive range that already includes battery-powered electric vehicles and hybrids), the ix35 Fuel Cell weighs in at 1,800kg. It looks like Hyundai’s standard ix35 but minor exterior revamps, such as a new grille, mark the Fuel Cell out. The performance is also remarkably similar but, thanks to the whisper-quiet 100kW (136hp) electric induction motor, it doesn’t make anywhere near as much noise.

It’s the car companies’ job to make the cars, but the vehicles need fuelling and there are obviously huge financial interests at stake when it comes to shaking up the status quo.

Hyundai has tuned the Fuel Cell version for the ‘demanding preferences of European drivers’, with improved handling and driving dynamics. Like the standard model it handles well at speed, and the four-wheel drive kicks in for grip and stability when cornering in wet or slippery conditions.

The ix35 Fuel Cell accelerates from 0-100km/h in a respectable 12.5 seconds, but you really notice how nippy it is when you’re at the lights and accelerating to city speeds from a standing start. The top speed is limited to 160km/h (around 100mph) and a little over 5.5kg of pressurised hydrogen will keep it going for a liberating 594km (341 miles). The car is hybridised with a fairly small, 24kW lithium battery to maximise efficiency, which can power the vehicle for a mile or so if you need it.

The Hyundai ix35 Fuel Cell will go into production in 2015, so we’ll have to wait for the ticket price. But how do you price radically new, planet-saving technology that, not so long ago, was a laboratory prototype worth tens of millions? Rumour has it that Toyota lost $80,000 on the sale of every Prius at the beginning of sales, and continued to make a loss on each vehicle sold for a decade before it shifted enough units to put the model into profit. But in a pioneering move, Hyundai is making a lease option available in the UK. Fleet users and those living near our rare hydrogen refuelling facilities could be looking at around £10,000-15,000 a year for the kudos of a seat among the first owners.

Fuel cells have been around since 1839, but it was the fate of batteries (invented a couple of decades earlier) and steam (later replaced by the internal combustion) to power us through the industrial revolution and up to the present day. It wasn’t until the 1960s that NASA saw a use for fuel cells, and kicked off a development programme that would ultimately take man to the moon.

The auto giants have spent billions over the last decade turning laboratory curiosities into real-world electric vehicles, and it looks like the tide’s turning.

It makes eminent sense to use electric power for propulsion because, like everything else, cars are using more and more electric power for auxiliaries, including communications systems and even the propulsion control systems themselves. Several manufacturers have released models that send electronic, rather than mechanical, signals from the ’gas’ pedal to inject more fuel.

The Japanese, Germans and Americans are also well into the hydrogen game. Ford, GM, Honda, Mercedes, Nissan and Toyota are just some of the fuel cell electric players, and BMW developed a Hydrogen 7 series combustion engine model a little over five years ago (though the company is now partnering with Toyota on the development of ‘fuel cell’ hydrogen cars).

Honda has installed a hydrogen filling station at its Swindon HQ and a couple of other companies have access to hydrogen fuel in the UK. But why would manufacturers offer fuel cell electric vehicles (FCEVs) in a country which, as yet, has no real hydrogen infrastructure?

Will fuel cells catch on?

For the UK, the ix35 Fuel Cell will play a role in the question ‘what comes first, the vehicles or the fuelling stations?’. The availability of hydrogen vehicles should encourage meaningful investment to help get hydrogen fuelling moving. Frankfurt, for example, is part of a growing network that offers hydrogen as an option on some public forecourts; at €9.99/kg you could fill the Hyundai’s tank for around €50 (£41).

There’s a crucial political role in the establishment of a hydrogen fuelling infrastructure; it’s the car companies’ job to make the cars, but the vehicles need fuelling and there are obviously huge financial interests at stake when it comes to shaking up the status quo. Having said that, the first fuel cell car on this side of the Atlantic – a modified DAF 44 – was actually developed by Shell’s technology centre in 1967 – although it used the carcinogenic fuel hydrazine rather than hydrogen.

Last year, a government-backed study estimated that 1.6 million hydrogen vehicles would take to British roads by 2030, served by over 1,000 hydrogen fuelling stations.

That tallies with commitments from all the big Japanese auto-makers to release ‘series production’ FCEVs from 2015 (though unlike the Hyundai model, they’re not expected to be immediately available in the UK). If the same report is correct, the market share for FCEVs could be 30-50% by 2050.

What is a fuel cell?

For those not in the know, a fuel cell, like a battery, is an electrochemical energy conversion device.

What happens inside is basically the reverse of the ‘water electrolysis’ you probably saw back in school, where an electric current splits water into its basic elements, hydrogen and oxygen. As water is the only ‘emission’, any fuel cell-powered device is considered to be zero emission.

The establishment of a ‘hydrogen economy’ has been likened in magnitude to the move of commerce from canals to rail. The investment required for this monumental shift is comparable but, like railways in the second half of the 19th century, the roll-out will be spurred on by demand. Hydrogen sources will gradually de-carbonise as market share increases, with estimated carbon savings of 75% by 2030 – and truly zero emission fuel by 2050.

Investment mistakes and red herrings can be hugely expensive and the car industry, which invests billions in manufacturing, is a cautious beast. It’s hard for ‘new’ tech to compete with a century of work to slash car manufacturing costs; no one was concerned about the individual production cost of fuel cells in the space programme – the focus was on reliability, efficiency and a low launch weight.

But in huge factories producing half a million cars per year, you can’t make fuel cell ‘engines’ using hand-carved graphite plates – and nor can you smother them in expensive precious metals like platinum. The materials used must be cheap, recyclable and lend themselves to mass production. On top of the commercial risk, until recently the materials that could make fuel cells cheap enough for an affordable family car just weren’t available.

Getting FCEVs on the road

A technical breakthrough at the famous Los Alamos laboratories significantly reduced the amount of platinum required for workable fuel cells, and led to a ground-breaking report report for the US Department of Energy in 1991. The report identified fuel cells as a ’wild card’ potential future propulsion system for cars. Later that decade, the car industry started to realise that the technology warranted serious consideration, and began assembling the research platforms that have led to today’s fully functional fuel cell cars.

Any new product entering today’s marketplace must satisfy far more stringent criteria than the incumbent product on sale, and FCEVs are no different. As well as the standard safety tests, regulators now consider the life-cycle of product materials when certifying vehicles.

The good news is that the components in a fuel cell are fairly straightforward to recycle (with platinum recovery rates currently over 90%, for example). Unlike internal combustion engines – which can be works of art if you like that kind of thing – fuel cell ‘stacks’, which constitute the heart of the fuel cell system, have lots of so-called repeat components. This means that, in the long term, they should be much easier to produce and assemble than any kind of conventional engine.

We don’t know for sure how the personal transport market will evolve over the next century, but we do know that various options – that make sense from a holistic perspective – must remain open to us. Things will look pretty different in a century’s time, but it’s clear that electricity is going to play an increasingly important role in the transportation of the world’s citizens. The challenge will be to use, deliver and store it efficiently and in a sustainable manner that places minimal stress on the environment.

100% guilt-free, carbon-neutral motoring is a very challenging goal, but we can take big steps towards it – and vehicles like the Hyundai ix35 Fuel Cell represent giant leaps. We don’t yet have the infrastructure in place to make the system perfect, but that’s no reason not to start – provided we believe we can make the necessary improvements over time. If the car industry wants to keep selling cars well into the next century, it’ll probably to have make an ‘electrified’ vehicle very similar to this one.

Fuel cells can’t solve all the world’s problems, but they are tailor-made to match the requirements of a 21st century power source. Do they herald the dawn of a new energy era, still fuel-driven – but in a manner which doesn’t carry the seeds of its own destruction? It’s looking more likely than ever.