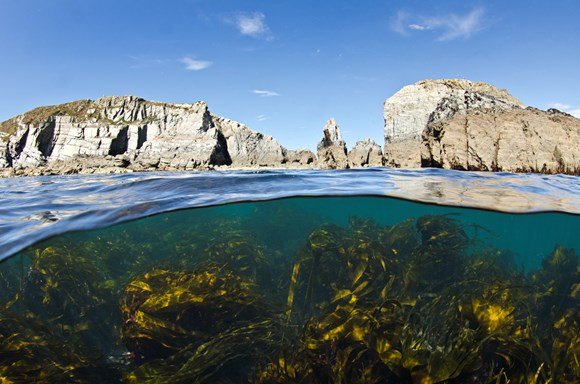 The UK will become the first nation to produce a complete map of its blue carbon stores, thanks to a new and pioneering project.

The Blue Carbon Mapping project – led by the Scottish Association for Marine Science (SAMS) and funded by WWF-UK in collaboration with The Wildlife Trusts and RSPB – builds on the blue carbon mapping that began in Scotland.

The final report will be produced by the summer of 2023, with initial findings expected later this year.

There is currently limited information about how much carbon is stored in and sequestered by UK marine habitats such as saltmarsh, seagrass beds, kelp forest, biogenic reefs and marine sediments.

The project aims to address this ‘scientific blind spot’, paving the way for better understanding and protection of the UK’s blue carbon habitats.

Scientists will assess the carbon storage and sequestration potential of all UK seas, as well as within Marine Protected Areas (MPAs).

‘More than two-thirds of the UK is under the sea, yet carbon accounting stops on land, creating a substantial blind spot around the carbon storage capacity of UK seas. We need to learn more about this and fast to stop vital marine carbon stores being damaged by human activities.

‘This data will be vital for a range of industries, for futureproofing UK fisheries, and for tackling the climate and nature crises.’

With two-thirds of the UK under water, the study will be critical in helping the UK achieve its commitments to achieving Net Zero and to protect at least 30% of UK seas for nature by 2030.

Understanding and mapping blue carbon stores will allow UK governments to plan and prioritise how we use our marine environments in the future. This includes exploring the impacts of human activities on blue carbon stores.

Currently, natural marine carbon stores are thought to be vulnerable to various pressures which can cause them to be disturbed, damaged or removed entirely.

They include bottom-towed fishing gear – used by certain fishing activities such as the scallop industry – and developments, such as offshore energy, at sea and along our coasts.

‘The government has committed to protecting 30% of the sea by 2030 but the wider seascape is largely being ignored.  From vibrant seagrass meadows to cold water corals, our marine environment is not only rich in wildlife but vitally important for storing carbon and tackling climate change.

‘We are expanding the North Sea study to cover all UK seas, providing us with crucial data that can help determine how we can strategically protect our oceans for wildlife, climate, and people.’

The project follows a pilot study in the North Sea that was published last year and revealed just how important protecting UK seas are for tackling climate change.

The report found that carbon stores in the English North Sea amount to nearly 20% of that held in UK forests and woodlands.

‘The increasingly stark warnings of the IPCC and other scientific papers highlights how the nature and climate emergency is affecting all of us, the wildlife we love and the wild places we cherish. This study is bringing together experts from different organisations to look at whether the UK’s network of Marine Protected Areas (MPAs) could be an important asset to our politicians in both protecting species and tackling climate change.

‘On land we have seen that protecting, restoring and creating wild spaces can lead to benefits for our wildlife as well as helping to lock up greenhouse gases, but to date no one has looked at our marine environment. The results of this study could be a major asset to decision-makers in the UK in seeing how an investment in our network of MPAs will benefit both our iconic wildlife and keep greenhouse gasses locked up.’

The UK Blue Carbon Mapping project will complete essential research in three regional phases –English Channel/Western Approaches, Irish Sea and Scotland (with the North Sea assessment completed and published last year) – before combining these into a UK summary next year.