This dynamite duo has developed invisible insulation for period properties 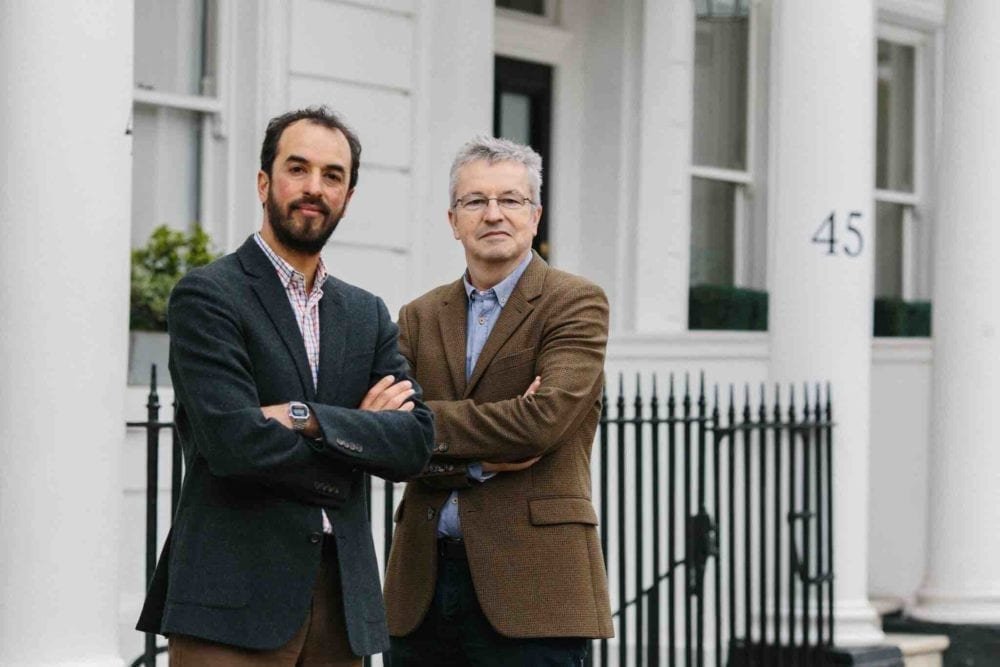 At the end of February, the Green Building Council reported to parliament that 25 million homes would need refurbishing to the highest standards by 2050 – at a rate of 1.4 homes every minute – if we’re going to meet our mid-century goal of an 80% cut in carbon emissions.

With a third of UK emissions caused by heating draughty buildings – and four-fifths of the homes we’ll occupy in 2050 already built – we’re in dire need of a retrofitting revolution.

This isn’t a new problem: Mukti Mitchell (main image, left) was on an internship in parliament when, back in 2010, MPs sought ways to insulate Britain’s old housing stock.

Always up for a challenge (Mukti sailed round Britain on an eco-yacht to promote sustainable lifestyles), he was inspired to tackle the issue head-on.‘Britain has 27 million homes so if we knocked them all down and built new ones it would take 270 years, so that’s impossible.’ Mukti explains. ‘Our old buildings are also an important part of our national heritage and beauty and make many of us happy. Retrofitting insulation is keeping the best of the old and the new: it gives people jobs, is far less expensive and uses far fewer new materials. Can you imagine how many trees it’d take to rebuild our 270 million windows?’

‘As a society we need to learn that applying skilled labour to improve properties is much more valuable than throwing away the old and starting from scratch. Skilled jobs are much better than cut down forests.’

Mukti joined forces with Paul Dickinson, who was inspired by Mukti’s tenacity and commitment to addressing climate change. ‘I was told insulation provided the best return on investment anybody could reasonably seek to obtain’, Paul tells us. ‘I was very interested in getting into the insulation business, as it could help people save money by taking action on climate change, a win-win situation.’

Some of the greatest potential savings are locked up in the UK’s period properties, so a decent retrofit can make a serious dent in owners’ energy bills. ‘Insulation can save owners of older homes over a thousand pounds a year’, says Mukti.

Paul and Mukti launched CosyHome Company in a bid to make period properties as warm as they are beautiful. ‘We offer CosyGlazing – a new, virtually invisible secondary glazing – as well as loft, draught, floor and sloping ceiling insulation’, Mukti tells us. ‘Together these save up to 50% of the heat from leaking out of your house. It makes you warm, offers a return on investment of 10-20% per year and is good for the planet, too.’

CosyGlazing saves 70% of the heat lost through windows. It’s made from plexiglass, the unbreakable material used for aeroplane windows, which is attached to the opening sashes using magnetic tapes.

Unlike double glazing – which is expensive, changes the look of your windows and only lasts 10 years – CosyGlazing is almost invisible, approved for listed buildings and has a design life of at least 30 years. ‘Warmth that preserves the natural beauty of your home without requiring planning permission’, Paul summarises. ‘What’s not to like?’

NEXT STOP: THE WHITEHOUSE?

Mukti is desperate to insulate Buckingham Palace and Paul sits by the phone every day waiting for the National Trust to call.

The duo would also like to help churches and other places where unique architecture presents a special challenge. ‘I was at the Whitehouse in 2013 and the building manager did actually ask me for a quote to do the windows of the Executive Office building’, Paul reveals. ‘Fortunately we’re too busy in the UK right now to consider US expansion.’

Click here for more on all CosyHome Company’s services, including CosyGlazing.