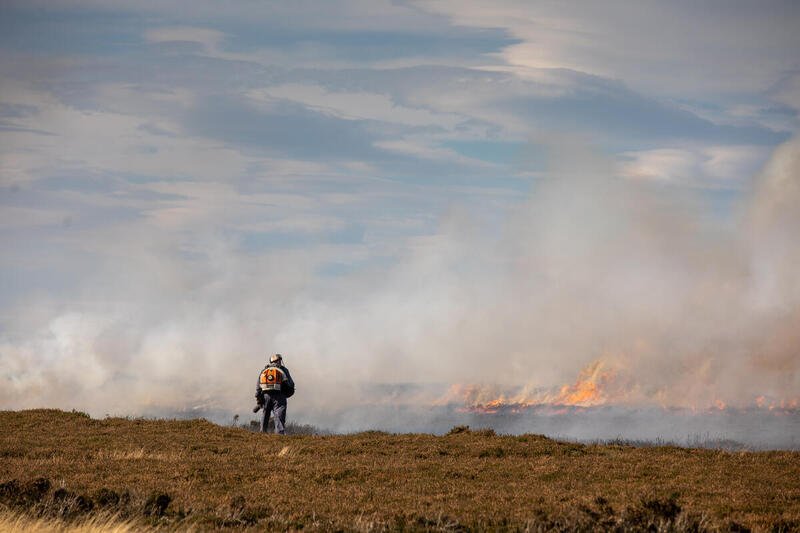 Grouse moor owners have continued to set fire to some of the UK’s most protected nature sites despite a new government ban brought in to protect sensitive peatlands, according to new research published today (30 May).

An eight-month-long, satellite-based investigation by Unearthed has uncovered dozens of instances of fires taking place in protected areas that are identified by an official government map as deep peat, potentially in contravention of the new ban.

Separate data gathered by the RSPB and campaign group Wild Moors and published today also suggest that the regulations haven’t been effective in stopping sensitive peatland habitats from being set ablaze.

Peatland is the UK’s largest natural carbon store on land, ‘locking in’ an estimated 3.2 billion tonnes, as well as providing nesting and feeding grounds for many wading birds and important habitats for rare insects and plants.

Last year, the government introduced a ban to protect what it called ‘England’s national rainforests’ from grouse moor fires, stating that ‘there is a consensus that burning of vegetation on blanket bog is damaging to peatland formation and habitat condition’.

The ban was widely criticised for being riddled with loopholes and covering only a fraction of the UK’s peatlands. The new regulations made it illegal to burn heather in protected areas but only if they lie on a thick layer of peat soil – over 40cm deep – and with exemptions for rocky or sloping ground.

‘The government ban on peatland fires is a sham. It’s shot through with loopholes, poorly enforced and the evidence points to some landowners ignoring it. Peatlands are the UK’s largest carbon store on land, help prevent floods and are home to rare plants, insects and birds. Why on earth is the government allowing them to be turned into charred wasteland for the private gain of a few? If ministers were ever serious about protecting this vital landscape, they should make sure this evidence is thoroughly investigated, peatland burning is comprehensively banned in law and extra funding is committed to guarantee enforcement.’

Last October, at the start of the first burning season since the ban came into force, Unearthed set out to investigate the impact of the new regulations.

Working with Greenpeace’s Global Mapping Hub, Unearthed created a state-of-the-art mapping tool taking in live images from several satellites, including NASA’s heat spot technology and the European Space Agency’s Sentinel-2, and overlaying them with several maps showing the location of protected sites and the depth of peat.

The Unearthed analysis identified 251 incidents of fires set over the burning season on peatlands that are used as grouse moors.

While most of these fires are likely to fall outside the scope of the ban, the mapping tool allowed investigators to rule out loopholes and zero in on the fires that appear to be in contravention of the regulations.

‘Grouse moors continue to fan the flames of climate change by setting the nation’s carbon-rich peatlands ablaze, despite the government’s climate advisers urging that every last peatland needs to be restored to protect these important ecosystems from collapse. By allowing grouse moor burning to continue in any capacity, the government is not only permitting peatlands to be damaged, but also giving space for the existing rules, as shortcoming as they are, to be broken. Wild Moors is urging the government to extinguish grouse moor fires once and for all by introducing a complete ban on burning peatlands.’

Of the 251 fires identified, 51 took place in nature sites protected by multiple conservation designations and identified by Natural England’s soil map as deep peat and in the absence of a government-issued licence.

While Natural England’s database is the best official data available, it is based on modelling and does not conclusively prove the presence of deep peat. This is why Unearthed also carried out physical spot checks at a few estates where the map indicated possible contravention of the regulations.

The findings indicate that while some landowners have taken care to only set fire to heather on areas where the peat is below 40cm deep, others have burnt on the kind of deep peat covered by the ban.

Of the 251 peatland fires identified, 44 were on land marked in an official government map as blanket bog – a type of peatland and a delicate habitat of international importance.

Although the term ‘blanket bog’ isn’t mentioned in the new regulations, the government’s stated purpose for the ban was to ‘prevent the burning of heather and other vegetation on protected blanket bog habitats’.

Unearthed has sent details of all these burns to Natural England’s enforcement team for investigation and understands that the regulator is looking into the evidence and identifying potential sites to investigate.

‘It’s clear from the evidence we have collected that the new peatland burning regulations in England are not working and that burning is still taking place at a massive scale on peatland vegetation and inside protected sites. We are in a nature and climate emergency. Intensive and damaging land management practices such as burning continue to harm and further threaten these vital carbon and nature-rich ecosystems. This is why the RSPB is calling for a blanket ban of burning on all peat. And further, to encourage compliance, we are calling for driven grouse shooting to be licensed as it is clear that existing regulations and laws are not proving a sufficient deterrent in all cases.’

Because of the limitations of satellite monitoring – they typically capture just one image a day and cannot see through clouds – this is very likely to be a fraction of the true number of fires.

Separate figures released today by the campaign group Wild Moors and based on monitoring on the ground, show they received 1,203 reports of fires between October and April, 191 of which were in areas mapped as deep peat and inside a protected site.

This is an increase of 67% compared with the previous season, although a rise in public awareness will likely have contributed to this.

Separately, the RSPB has received 272 reports of fires over the last season, 79 of which took place on peat mapped as deep and in a designated site.