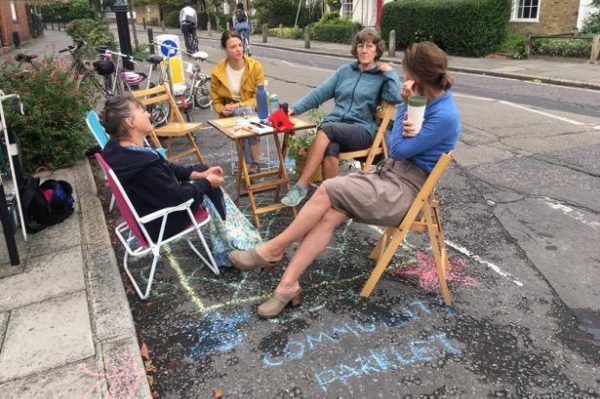 A campaigner from North London is organising the first ever ‘People Parking Day’ in London this weekend (25-26 September) to encourage people to sit and talk in a car parking space on their streets.

The volunteer-driven London Parklet Campaign is working with the charity Living Streets London and IBikeLondon to encourage Londoners to take up part in the activities, which are being held just after World Car Free Day (22 September).

Brenda Puech came up with the idea of reclaiming some parking spaces for community use while recovering from a serious collision when she was knocked off her bike by a motorist who ran a red light.

After being refused permission she set up a guerilla parklet outside her home in London Fields. The ‘People Parking Bay’ was a patch of artificial grass with flowerpots, a bench and a sign that read ‘You’re welcome to park yourself on the bay.’ Sadly the council removed it.

The London Parklet Campaign is calling on the mayor and borough leaders to allow Londoners to apply to create ‘parklets’ in the streets where they live, with an aim to have a parklet on every street.

‘I want every Londoner whether they own a car or not to have access to these public spaces. Not everyone is lucky enough to have a private garden so providing social spaces close to people’s homes is essential. We can really improve our environment and wellbeing if we reclaim these areas as spaces to sit and socialise, and make London the parklet capital of the world.’

BRENDA PUECH
A founder of the London Parklets Campaign

Pop-up events across the city will take place in empty car parking spaces. The best-designed parklet entry will win a prize of £100, with judging by leading designers at the V&A Museum, Sam Brown and Heather Whitbread.

Parklets are an alternative use for a car parking space, where people can sit and talk, eat their lunch or enjoy their leisure in any number of ways. Originating in San Francisco, they come in all shapes and styles, from the functional to the flamboyant.

The campaigners want to build on the success of London’s ‘streeteries’ – seating areas in car parking spaces to support bars and restaurants during the pandemic.

As well as their social benefits, parklets can help address climate change by greening the urban environment and providing extra storm drainage.

Despite their popularity, getting ‘community parklets’ approved is a bureaucratic nightmare. There is no process in any London borough.

‘Commercial parklets’ are deemed desirable, whereas the bar for their cheap-and-cheerful community equivalent is set prohibitively high.

Residents are required to take out a huge public liability insurance policy (proposed up to £10 million in one London borough) simply for installing a bench and table in the street.

Talking about the ‘People Parking Bay’ she set up in Hackney, Brenda said: ‘People used the Parking Bay as a resting point on the way back from shopping or cycling; mums used it to feed their babies; locals watered the plants. One couple had their first date there.

‘You’d see complete strangers smiling and talking to each other. The reaction of residents was astonishingly positive. At first I’d find feedback on bits of paper sellotaped to the bay, so I decided to leave a visitor book on the table. Five books filled up within four weeks!’

Sadly, the parklet was removed by the council, despite Brenda’s efforts to apply for a residential car parking permit and lobbying councillors in Hackney and Tower Hamlets.

‘Allowing people to create parklets will empower communities, build social alliances and enable people to invest in the streets they live in, with a marginal impact on the number of car parking spaces. At this time of recovery from covid and real concerns about climate change, we need to start a huge shift from streets for vehicles to streets for people.’

A map being developed by the campaign will celebrate existing parklets and activities planned for People Parking Day, with the hope that councils will allow local groups to put one on every residential street in the capital.

Rates of car ownership are far lower in London than the rest of the country. In inner London, nearly two-thirds of households (61%) do not have access to their own car, and are unable to use these public spaces to socialise or play with their families.

Across the capital, nearly half (46%) of households don’t have access to a car. Islington has the lowest level of car ownership at 26%, according to figures published by Transport for London.

‘We want a place for families to be allowed to eat together when they come to our soup kitchen. Having a parklet outside our cafe would create a community identity and be a green garden addition to the streets of Hoxton.’

Research by Centre for London shows that there are over 1 million car parking spaces in London, taking up over 3,000 miles (5,000 km) of kerbside space.

This is roughly the distance from the UK to the US across the Atlantic Ocean.

The average car in London is parked 95% of the time (ie over 23 hours a day). 43% of cars are parked on-street, taking up the equivalent of 10 Hyde Parks.