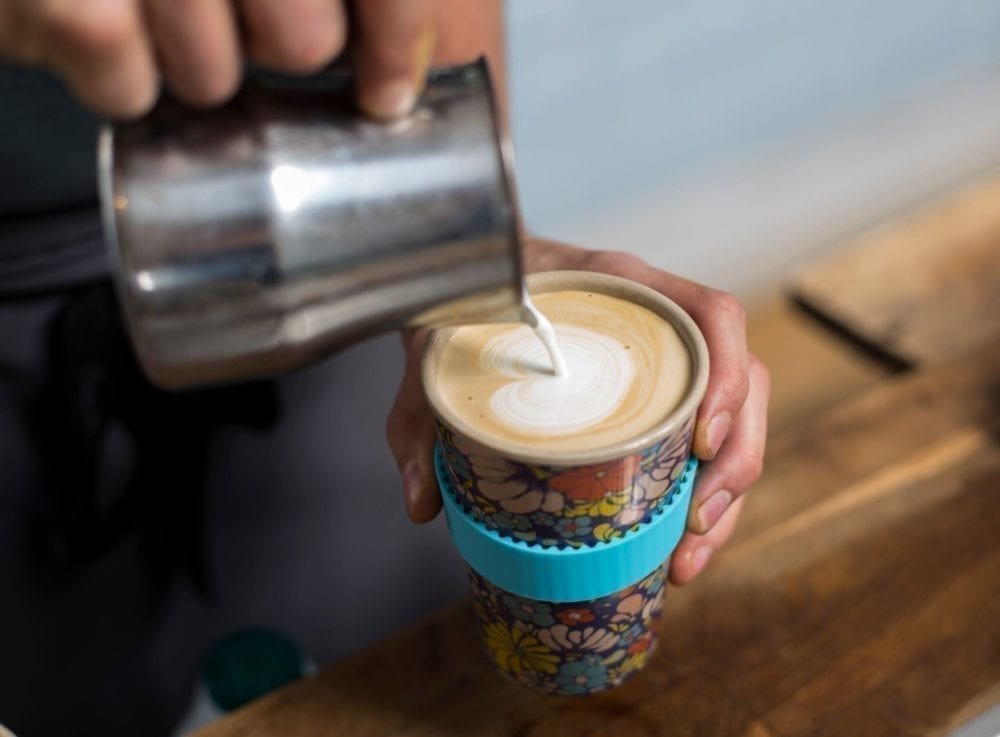 Reusable coffee cups are the way forward – but are they all created equal?

Each day we bin up to 7m disposable coffee cups. Vast, non-renewable resources are required to create, deliver and dispose of single-use cups that are used for minutes but last for centuries.

From Hugh Fearnley-Whittingstall to Sir David Attenborough, some of our national treasures have helped raise public awareness of the single-use plastics problem and mobilise consumers to demand change. We’re a nation of coffee lovers, but we’re also a society that’s decided to reject single-use plastics.

The rise of the eco cup

Reusable coffee cups have been around for some time, but thanks to public demand they’re now a lot more common. ‘Eco’ cups have been launched in every colour of the rainbow, using materials ranging from BPA-free plastic to glass, porcelain and bamboo.

Reusing a coffee cup is better than creating single-use waste or recycling – but, like any product, each eco coffee cup leaves its own footprint.

Plastic is a very common component of reusable coffee cups – and we all know the issues with that – and while glass can be reused it’s not always the best option when you’re on the go. Bamboo makes use of a natural material, but unfortunately many of these cups are formed using a plastic, like melamine.

Richard Milton, founder of Huskup, set out to find an alternative solution. ‘As demand grows’, he tells us, ‘we also needed a better solution to make sure we don’t replace the 2.5bn takeaway cups that are discarded each year in Britain with reusable coffee cups that use yet more plastic – it doesn’t seem right to have plastic as part of the solution.’

Huskup came to market earlier this year. It’s a reusable coffee cup made from one of the world’s most abundant food waste materials: the humble rice husk.

The Huskup doesn’t contain any plastic and can fully biodegrade at the end of its life. You can reheat coffee in your Huskup without any fear of nasty chemicals leaching into your drink.

The cups are microwave and dishwasher safe, and tough enough to withstand temperatures of -30ºC to 120ºC. They’re not indestructible, but if you look after your Huskup it should last for years. It’s certified to European compostability standards (EN 13432); if, at the end of its useful life, it should ever get into the land or sea, it won’t break down into microplastics or get into the food chain.

By taking natural agricultural waste from earth to earth, the Huskup addresses our takeaway cup crises without the drawbacks associated with some other reusable cups. ‘If we can avoid plastic in the first place’, Richard explains, ‘then we won’t have the problems associated with it.’

Around 125m tonnes of rice husks are produced globally each year; when they’re used as a material they’re diverted from the incinerator, where they create carbon and sulphur dioxide. ‘Each cup makes a contribution to the environment before it ever even sees an espresso’, Richard says.

On top of the green credentials, Richard felt it was important for the Huskup to be a desirable, unique product that people would love. To help engagement and reuse, Huskup teamed up with independent artists for its first 12 designs. ‘Illustrators Donna Sarah and Natasha Kirby were really into the concept from the off’, Richard tells us. ‘They both share our environmental principles and, like us, they are independent and original. We’re all looking to shake things up in our own way!’

The technology and research required to turn something as simple as a rice husk into something as strong and durable as a Huskup has been developed over many years. ‘We’re now in a position to take this to the next level’, Richard tells us, ‘with more collaborations, new designs and new product launches – we’ve got plenty up our sleeve!’

Click here to view the full Huskup range and order your very own online.