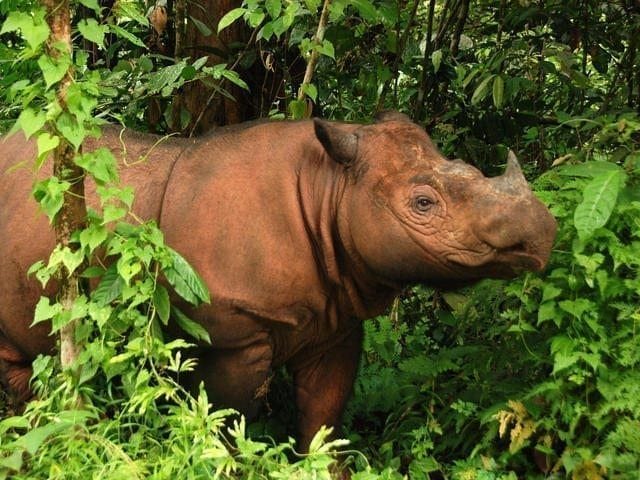 WWF announces first contact with Sumatran rhino in over 40 years

WWF researchers are celebrating the first live sighting of a Sumatran rhino in Kalimantan, the Indonesia part of Borneo, since it was thought to be extinct there. This is the first physical contact with the species in the area for over 40 years, and a major milestone for rhino conservation in Indonesia.

The female Sumatran rhino, which is thought to be between four and five years old, was safely captured in a pit trap in Kutai Barat in East Kalimantan on 12 March.

In 2013, a WWF survey team first found evidence that the species was not extinct in Kalimantan by identifying footprints and capturing an image of a rhino on a camera trap in the same forest. Since then,15 Sumatran rhinos have been identified in three populations in Kutai Barat.

‘This is an exciting discovery and a major conservation success. We now have proof that a species once thought extinct in Kalimantan still roams the forests, and we will now strengthen our efforts to protect this extraordinary species.’

The Sumatran rhino is one of two rhino species that exist in Indonesia. It is estimated that fewer than 100 Sumatran rhinos remain in the wild, mainly on the island of Sumatra. The rhinos face serious threats from poaching and habitat loss due to mining, plantations and logging. The wild population of Sumatran rhinos in the Malaysian part of Borneo was declared extinct last year.

The captured female rhino is being held in a temporary enclosure before it’s translocated by helicopter to a new home – a protected forest about 150km from the capture site.

Working as part of the Sumatran Rhino Conservation Team established by the Indonesia Ministry of Environment and Forestry, WWF and other team members are working to translocate at least three rhinos from their current habitat to the sanctuary, where they will be safer and can establish a breeding population.

‘This outstanding discovery is a beacon of hope during a vital time for the conservation of rhinos worldwide, with many iconic species facing grave threats due to poaching, habitat loss and the effects of climate change. This encouraging news is a reminder of the importance of safeguarding of wildlife and the need for governments, NGOs and communities to increase efforts in restoring population numbers of these critically endangered species.’

In other news, Indonesia also recently announced an increase in the population of the critically endangered Javan rhino, which only survives in Ujung Kulon National Park. Three new calves brought the number of Javan rhinos up to 63 from the 60 announced in September 2015.

Click here to find out more about WWF and its conservation work.