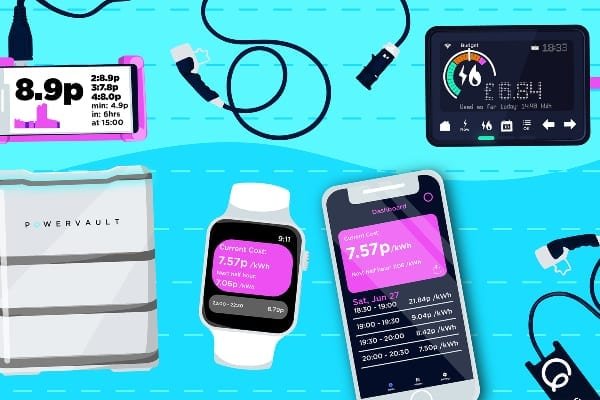 This article first appeared in our I.T. special issue of of My Green Pod Magazine, distributed with The Guardian on 16 September 2020. Click here to subscribe to our digital edition and get each issue delivered straight to your inbox

Energy use in homes currently accounts for 14% of the UK’s total greenhouse gas (GHG) emissions.

Given that global CO2 emissions must fall every year from 2020 to avoid catastrophic warming (1.5ºc by 2100), the energy sector has a significant role to play in the reduction of carbon emissions.

Octopus Energy launched in 2016 with a vision to use technology to bring down prices, ensure great service and drive towards a renewable future powered by a smart grid, which Octopus sees as an essential element of affordable decarbonisation. Since then, Renewable Energy Association has named Octopus Energy ‘the company doing the most to advance renewables in the UK’.

‘Our mission is to make the transition to green energy affordable’, said Greg Jackson, founder and CEO of Octopus Energy; ‘in fact, our job is to make greener energy cheaper than dirty energy and to provide outstanding customer service while we’re doing it.’

One way to reduce the need for dirty fossil fuels is to shift collective consumption patterns and better distribute energy usage throughout the day – to times when energy is greenest (and cheapest).

By thinking differently and leveraging the power of new technologies, Octopus Energy has seized the opportunity to use technology to drive a dramatically more efficient system – not just in the UK, but globally.

This approach has led to the development of tariffs and tech products that encourage a shift in consumer behaviour, spreading consumption throughout the day and smoothing out carbon-intensive ‘peaks’.

At the heart of this transformation is Kraken, a cloud-based tech platform that Octopus Energy built from scratch.

Kraken is essentially a big robot that uses algorithms, machine learning and big data to manage the entire process of retail energy pretty much automatically, driving efficiencies from trading through to billing.

Perhaps most importantly, Kraken simplifies complex ‘smart’ tariffs that vary energy prices throughout the day to match the availability of wind and solar energy.
These smart tariffs allow customers to make greener choices and save money by shifting their consumption to times when electricity is cleaner and cheaper.

Get paid for using power

Agile Octopus, a world-first time-of-use tariff, is one of the ‘smart’ tariffs enabled by Kraken. It unlocks dynamic wholesale pricing to benefit customers, alerting them when energy is cheapest and greenest.

Across the UK, whenever more electricity is generated than consumed, energy prices fall. Agile Octopus allows customers to take advantage of these negative price events and get paid for the electricity they use.

A tariff for EV drivers

With the launch of Outgoing Octopus, Octopus became the first energy supplier in the UK to offer a smart export tariff. When the government’s Feed-in Tariff scheme ended, Outgoing Octopus gave UK homeowners with solar panels a way to make money by exporting excess power to the grid. Since then, the company hasn’t stopped innovating in its renewable mission.

The UK’s energy grid has to be balanced in real time, matching supply (the energy being generated) with demand (the energy we use). Too much or too little power going into the grid, and the system becomes unstable, which could cause blackouts.

Covid-19 has had a huge impact on how energy is being used across the UK. On average overall demand is down 20% since lockdown, and with two bank holidays back in May, we saw a combination of record low levels of demand with large amounts of renewable energy from solar and wind.

The impact of price incentives

During May’s bank holiday weekends, 100,000 customers were invited to take part in a ‘plunge pricing’ trial in which Octopus Energy paid customers to move their energy use into off-peak windows. High renewable output, coupled with low demand, meant prices fell below zero, so Octopus offered customers up to 5p per kWh to take excess power off the grid.

The result: customers used 71MWh more electricity in the offered windows – eight times more than those in the control group – proving that even modest price incentives drive behavioural change.

This provided a glimpse of the future for renewable energy generation. A future where large amounts of green energy are available at zero marginal cost – if we can make the most of it.

But the innovation doesn’t end there. Octopus Energy’s open API enables customers to hack the energy system themselves, turning it green and developing smart integrations for the connected homes. It has attracted a fan base of developers like Kim Bauters, who created OctopusWatch, an app which helps users find the cheapest times to use renewable energy.

And there are many more examples of how Octopus’s ‘Agile Pioneers’ are pushing boundaries, building their own apps, running their own smart appliances and creating greener, smarter homes.

Kraken Technologies was developed to enable select third parties to take advantage of the technology developed on the Kraken platform by Octopus Energy. Kraken is now licensed several to other companies, including Australia’s largest energy supplier Origin and European energy leader E.ON, serving more than 12 million customers across the globe.

These Kraken-enabled innovations are significantly improving the UK energy grid’s renewable mix, and facilitating the use of excess renewable power when there is risk of overloading the grid.

These innovations can do the same thing to grids across the world and provide a basis for a global transition to green energy.

‘We’re thrilled to be able to accelerate our global expansion to make the green energy transition cheaper and faster’, Greg said. ‘It’s a testament to our team and our technology that in just four years we’ve created a business which has the world beating a path to our door and can face the future with such excitement. We’re looking forward to continuing to use technology to reduce energy costs, increase renewables and improve customer service in the UK, Australia, Germany and now many more countries.’

After growing from zero to a million customers in less than four years, ambitions are now even higher for the proprietary tech platform. Greg expects to see 100 million customers by 2030, accelerating global access to affordable green energy and supporting a worldwide transition to decentralised, decarbonised energy.