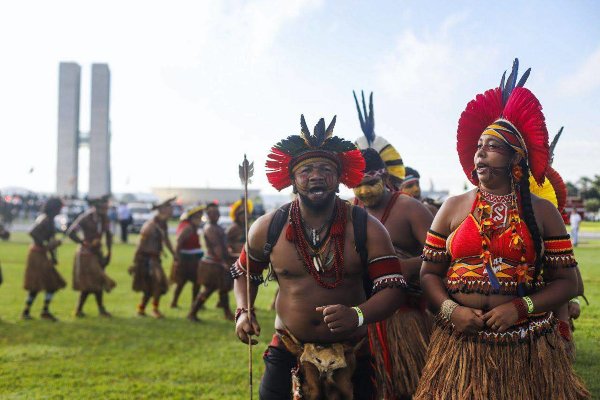 With the theme ‘Retaking Brazil: Demarcating Territories and Indigenizing Politics,’ the 2022 mobilisation returns to Brasilia after two years of online activities due to the Covid-19 pandemic.

The camp is taking place during the same period in which the National Congress and the Federal Government are voting on projects that violate the rights of Indigenous peoples such as Bill 191/2020.

The bill opens Indigenous lands – most of them located in the Amazon – to large-scale exploitation, such as mining, hydroelectric dams and other infrastructure projects.

‘We are in an election year and to start our journey of struggles we declare that this is the last year of the genocidal government of Jair Bolsonaro. Our Indigenous April will be marked by symbolic actions that will show our capacity in the fight for demarcation and the ‘Indigenization’ of Brazilian politics.’

On 09 March 2022, the plenary of the Brazilian Congress approved the request of the government leader for the urgent processing of Bill 191/2020. It means the proposal will be analysed by a working group and will be included for a vote in a plenary session between 12 and 13 April – during the ATL.

The mobilisation also takes place in parallel with climate litigation being heard by the Supreme Court that directly engages with Indigenous claims.

In addition to such climate litigation, APIB warns about the trial of the ‘Marco Temporal’, a time limit clause attempting to legalise Indigenous land theft, that will be resumed in the Supreme Court within this semester; and also for the ‘Package of Destruction’ – a set of measures planned to be voted in Congress this year and which has the power to accelerate deforestation and weaken environmental legislation.

‘Since the first days of this government, we have been shouting and denouncing the persecutions against the Indigenous peoples. There are innumerable threats due to the failure to demarcate our lands, in addition to deforestation and invasion of our territories. They act on two fronts: the persecutions against our leaders who oppose this misgovernment of Jair Bolsonaro; and the Congress trying to use the ink of the pen to massacre us.’

The ATL has 10 days of programming and over 40 activities scheduled. In addition to confronting the anti-Indigenous agenda, Indigenous health and education and the role of youth are some of the topics that will form part of the debates.

Also part of the first week’s programme are plenaries on the struggle for life, impacts on the judiciary, demarcation and public policies.

Closing the ATL, the second week’s programme will have a plenary on the LGBTQIA+ population, articulation with other social movements, and a call for action.