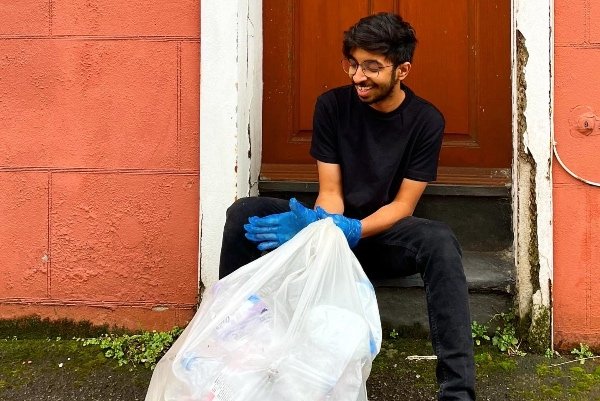 An Indian environmentalist helping to clean up UK streets has been given a special award by the prime minister.

Vivek Gurav has been plogging – that’s jogging while picking up litter – in the UK since he came to the University of Bristol on a scholarship in September 2021.

The master’s student had been behind a plogging craze in his home city of Pune, west India, which had seen hundreds of volunteers pick up 1,000 tonnes (and counting) of rubbish.

After joining the University he started ‘Bristol Ploggers’, a 140-strong volunteer group that has picked up 3,750kg of litter from all over the city. 12 nationalities are involved in the group and they have covered 400 miles of streets.

Now he has won a Points of Light award, which the Prime Minister gives to ‘inspirational volunteers’ who are ‘making a change in their community’.

‘Finding out I’d won the award was a real goosebump moment; I was really surprised!

‘For me, it’s a real honour and a verification that things like plogging need to be done, both in India and the UK. I hope this award will really support and amplify our cause.

‘When I told my parents they asked if I was lying. They are really happy and my father said he was very proud of me.’

VIVEK GURAV
Plogger, and winner of Points of Light award

Vivek is currently back in Pune researching his dissertation. He will return to Bristol next week.

After finishing his Environmental Policy and Management MSc, Vivek plans to stay in the UK. He hopes to gain more knowledge and experience in the sustainability sector so he can take that know-how to India.

‘Vivek’s drive to change the world for the better is nothing short of inspiring.

‘Together with his volunteers he has picked up thousands of tonnes of rubbish. It has taken hard work, intelligence and generosity of spirit – all traits that Vivek has in spades.

‘We are delighted that his amazing work on the streets of Bristol, Pune and further afield has been recognised by the Prime Minister.’

In 2020 another University of Bristol student, Jack Elliott, won a Points of Light Award for co-founding and running a network of more than 500 student volunteers across the UK during the pandemic.

‘I want to learn as much as possible so I can come home with insights. I’m really passionate about bridging the gap between developed and developing countries’ climate knowledge. That’s why I wanted to come to the UK to study climate science.’

VIVEK GURAV
Plogger, and winner of Points of Light award