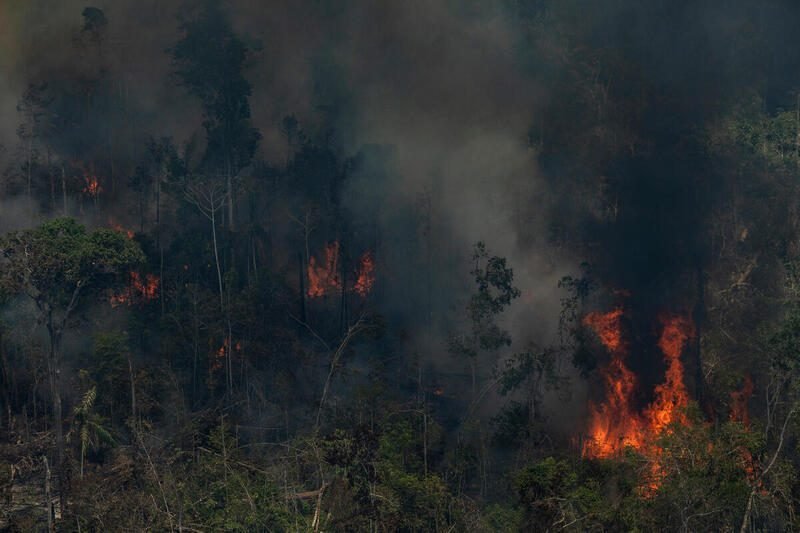 The Amazon in Flames Alliance, led by environmental organisations Amazon Watch, Greenpeace Brazil and the Brazilian Climate Observatory, has released images of a flyover showing the extent of deforestation and fire destruction in the Amazon.

The images were released as President Bolsonaro presented a speech at the 76th UN General Assembly (UNGA).

The Amazon rainforest remains shrouded in smoke and fire by arsonists and unchecked corporate greed, fuelled by Bolsonaro’s policies and rhetoric.

Touting his so-called environmental credentials, Bolsonaro benefits from the complicity of global leaders at events such as the UNGA.

Together, countries and their leadership are capable of pressuring Brazil and Bolsonaro to roll back his assault on the climate, environment, and human rights.

This rainforest destruction was confirmed by flyovers carried out last week by the Amazon in Flames Alliance.

The investigation took place between September 14 and 17, in the municipalities of Porto Velho in the state of Rondônia state and Lábrea in the southern state of Amazonas.

‘While Bolsonaro was en route to New York, we flew over the Amazon to record the reality of the destruction of the largest tropical rainforest in the world: illegal deforestation and burning.

‘The images don’t lie, but the same cannot be said of the President’s speech at the UN.

‘Our team witnessed massive destruction from the air, including a slew of fires burning on huge tracts of recently-deforested land,” stated Christian Poirer, Program Director at Amazon Watch.

‘The third catastrophic burning season of the Amazon could push the forest past the tipping point. While Bolsonaro spouts lies at the UNGA about Amazon protection, it’s unconscionable that his regime, and its global corporate, political, and financial enablers – such as BlackRock – continue to escape accountability for their role in fuelling the fires.’

The first images released by the project show large areas deforested in July and already consumed by fire — regions ranging from 1,550 to 2,450 hectares, or the equivalent to 2,012 to 3,181 soccer fields — are among the five largest deforestation areas in the state of Amazonas.

The following were also detected: the deforestation and erosion of land by mining activities within protected areas, illegal landing strips for planes, large plots of land being prepared for crops and cattle grazing alongside recent fires.

The Amazon in flames

Under the Bolsonaro administration, Amazonas surpassed Rondônia as the third state with the worst level of deforestation, according to the Brazilian National Institute of Space Research’s (INPE) Prodes system.

According to data from the Programa Queimadas within INPE, from January to mid-September, 2021, there were around 12,000 heat spots in Amazonas state.

In August alone, 8,588 spots were registered in the state, surpassing the record for the same month in 2020, which, in turn, had surpassed that of 2019.

Labrea is the most critical area in the country, with 2,959 heat spots in 2021. Porto Velho – the Brazilian capital where the greatest amount of Amazon rainforest is burned – is the second municipality with the highest number of fires, with 2,700 hot spots.

‘What we saw from above was the forest covered in smoke and torn by criminal and unchecked devastation on the ground.

‘Setting fire to the forest is part of the deforestation cycle, which includes the initial removal of the most valuable trees, a financial benefit for those who invest in land grabbing — this land, in general, ends up being transformed into pastures. And it is a crime, as outlined in the Executive Order No. 10,735, of June 28, 2021, which bans the use of fire in agricultural and forestry activities in Brazil.’

That same day, the federal government authorised, for the third time, the use of military troops to combat environmental crimes with a focus on illegal deforestation, a strategy that had already proven ineffective in recent years.

During his speech, President Jair Bolsonaro claimed to bring a ‘new Brazil, with its credibility restored before the world’ to the UN assembly.

Once again, Bolsonaro attempted to present an alternative reality of his impact as president to global leaders, revealing once more, disrespect for his peers, the UN, to the Brazilian people and most of all to the people of the Amazon.

The speech was riddled with lies. He said there are no corruption cases in his government, as many scandals involving his family and government are under criminal proceedings, including a federal investigation that links his former environment minister with illegal loggers.

Bolsonaro claimed Indigenous peoples have too much land in Brazil, in a feeble attempt to justify his land-grabbing bill and attempts to change the constitution to support invaders.

He also distorted data and claimed his administration had succeeded in reducing deforestation. The flyover by the Amazon in Flames Alliance proves otherwise.