ARE WE READY FOR IT?

We’re in the midst of a technology revolution – a ‘second machine age’. It will affect the entire population and could help transform industries – from the media and advertising to healthcare and energy – but are we ready for it?

Speaking at a House of Lords Select Committee on Digital Skills inquiry, Iain Wood, public affairs manager at TalkTalk, described the technology policy events he attends. ‘Often’, he said, ‘there are more iPads in the room than there are women. It is shameful.’

The Committee’s report, Make or Break: The UK’s Digital Future, was published in February – just ahead of International Women’s Day on 8 March – and it makes for some pretty disappointing reading.

It states that women make up just 6% of the engineering workforce and only 15.5% of the science, technology, engineering and mathematics (STEM) workforce. According to BCS, The Chartered Institute for IT, of the 4,000 students who take Computer Science at A-level, fewer than 100 are girls. 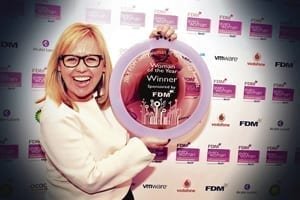 Digital skills can be used to design smart homes and green communities, and help to ensure we capitalise on technological developments across all sectors. From robotics and flexible electronics to applications in vertical farming and food security, technology provides solutions that could change the world. But creative ideas will only come from a diverse workforce – and that means getting more women into the tech world.

Torie Chilcott, co-founder of Rockabox and winner of last year’s Woman of the Year at the everywoman in Technology Awards, in many ways embodies the ‘Make it Happen’ theme for this year’s International Women’s Day. ‘The world is tech and if you want to be working in an exciting and creative area, then technology is where it’s at’, Torie told PQ. ‘I started out as a tech interloper and for me, it’s always been very much about what tech can do. The fact that tech can fly you to the moon, save your life or get your fridge to remind you you’re out of milk, that is what excites me. It’s also about harnessing an explosion of absolute ‘can do’-ness to do something you really love or are passionate about.’

After kicking off her TV career as a production secretary, Torie found a real flair for creating original ideas – particularly in the world of factual entertainment. Her first creative break was to oversee the new Format Development team at FremantleMedia, which went on to develop ITV’s Farmer Wants a Wife and Pop Idol formats. ‘Telly is very much a team event – no one person ever makes a show’, Torie told PQ. ‘There is always a massive, hard-working team behind it. My telly career engendered in me, crucially I think, a team mentality which I’ve sought to carry forward with me throughout my career.’

For any team to be successful, it needs to be diverse. Companies understand this and use psychometric tests to ensure teams and departments contain a healthy mix of talent without too many clashes of personality. They can boost their productivity and, in many cases, their bottom line as a result. The same applies in the tech sector: the Committee on Digital Skills reported that increasing the number of women working in IT alone could generate an extra £2.6 billion for the economy each year.

But attracting women to tech is no easy task. The Young Digital Taskforce ran an informal survey in schools and across social media, asking peers and parents to name people working in the digital industries. Most people were able to name Bill Gates, Steve Jobs and Mark Zuckerberg without any trouble – but then they got stuck. Not a single woman was mentioned.

‘Asked about the impression of people working in technology, the descriptions offered by the Young Digital Taskforce’s peers swung between geeks bashing away on keyboards or of boring middle-aged men in badly fitting suits doing dull repetitive jobs’, the Taskforce reported to the Digital Skills Committee. ‘The gender imbalance in tech is extremely damaging: it is hardly surprising that we have digital skills shortages given that we are failing to make the most of the talents of almost half of the potential workforce.’

A report by the Office for National Statistics (ONS) on graduates in the UK labour market found that, on average, men earned £3 more per hour than women in 2013 – partly because of the subjects male and female graduates studied. The report found that out of the top five subjects associated with the highest average gross annual earnings, four were subjects that male graduates are more likely to have studied: Engineering, Physical/Environmental Sciences, Maths/Computer Science and Architecture.

‘In all honesty I haven’t experienced any discrimination due to the fact I am a woman’, Torie told us, ‘but the tech sector is more male-dominated than the TV industry. We have been through a number of funding rounds; coming into contact with the VC world has made me aware of how male-dominated that is, but has it held me back? I don’t think so. The developer side is currently pretty male so it is crucial we encourage young women to understand the opportunities coding and careers in technology can provide and encourage a lot more people into that sector.’

The importance of encouraging careers in the tech industry hasn’t gone unnoticed by the Department of Education; it says ‘A high-quality computing education equips pupils to use computational thinking and creativity to understand and change the world.’ As a result, a technology revolution took place in schools last September; under a revamped national curriculum, classrooms embarked on a whole new way of teaching computing to kids aged five and above.

Introducing children to coding and algorithms could help ignite a spark of interest in female pupils before gender stereotypes kick in. For Torie, the issue is less about women’s rights and more about equal rights for all. ‘The moment you introduce the word ‘feminism’ it stops being a human issue, despite the fact it is an absolutely ‘human’ issue – it’s about equal rights for everyone’, she told us. ‘At Rockabox, we’ve pretty much had male and female parity since we started. We’re very proud of that.’

From advertising to architecture

At Rockabox, Torie and James Booth, a tech entrepreneur, are exploring the role of technology in advertising. They realised that the majority of online advertising doesn’t reflect the way consumers actually behave online, so they set about developing a new technology that offers an alternative to the ‘historically annoying’ online ads that most of us are used to. ‘We both strongly felt that advertising was going to change drastically when it came online and that content was going to play a big part in that’, Torie told us. ‘It’s truer every day; technology and the media are now inextricable – there is no siloing of either and if you approach it like that then you’re setting yourself up to miss great opportunities.’

From advertising and the media to energy, conservation and green architecture, technology is now a vital part of everyday life that can be embraced as a force for good. Christine Hynes, CEO of Climate Energy Homes, is using developments in tech to create sustainable housing, while various women in the arts – including PEA Award-winning Alice Sharp of Invisible Dust, Human Nature artists and Marion Cheung, whose work features on the cover of the spring issue of PQ magazine, are exploring the impact of technology on the human psyche. If we can redress the balance and get more women into these diverse roles, we might just stand a chance of changing our course before it’s too late.

TO FIND OUT MORE ABOUT TORIE’S WORK IN THE TECH SECTOR, VISIT ROCKABOX.COM. MORE ON THE DIGITAL SKILLS COMMITTEE CAN BE FOUND HERE.