HOW REUSE COULD DRIVE THE SHIFT TO A CIRCULAR ECONOMY GDP, income, savings, carbon emissions, investments, votes — the list of things we measure seems endless. Measurements allow us to understand the present, compare events from the past and set targets for the future: each provides feedback on how we’re doing and where improvements could be made.

But Cat Fletcher, reuse activist, waste campaigner and director of Freegle UK — which has over 1.8 million members in over 400 UK reuse groups — is frustrated that we have no decent or uniform way to measure the many things we reuse. ‘Reuse occurs across all sectors’, Cat tells PQ, ‘but much of it occurs at street level in the third sector; practitioners aren’t in alliance so the collective impact is unmeasured. It’s a missed opportunity which I’d like to address so that the reuse movement can mobilise and help change the world for the better.’ 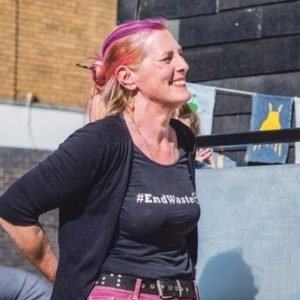 As a solution, Cat has formed Reuse International — an organisation set to launch next year to accelerate the reuse movement and help spur the green economy. Cat’s vision is to create a powerful think tank of academics, experts, investors and supporters — and, perhaps more importantly, a measurement tool to highlight the benefits of reuse and map out best practice.

For Cat, measuring reuse on local, regional, national and global levels would allow us to work out the financial, employment, business, environmental and personal benefits it generates. As a result, the sector would attract investment, support, policy change, tax breaks, publicity, endorsement and behaviour change.
The cost of waste

And change is certainly needed. According to the government’s Prevention is better than cure: The role of waste prevention in moving to a more resource efficient economy report, the waste we produce costs UK businesses £885 million to manage, and the estimated cost of waste management to local authorities in 2011-12 was £3.2 billion.

While decades of investment have been ploughed into recycling and disposal, the result is that we now have an established waste infrastructure that requires a feedstock of, well, waste — with no incentive to reduce it. ‘We need to change that’, says Cat, ‘and fast. There are too many people on the planet consuming way too much stuff, and we don’t have enough natural resources to continue on our current path of consumption. A considerable leap in the right direction would be to know how much we reuse now, and set ambitious targets based on the evidence. We could reuse more. We could normalise it. Reuse could be rewarded and championed.’

The need to address and reassess our general attitude to waste is gaining traction; last year, Dan Rogerson MP, Parliamentary Under Secretary of State for Water, Forestry, Rural Affairs and Resource Management, stated, ‘We need to develop further the concept of a circular economy, where one person’s waste becomes another’s valuable resource. Making the changes needed may require innovation and creative thinking but it is vitally important because of the benefits they can bring… Government’s role must be to get out of people’s hair; to set the conditions and guidelines that allow the market, businesses, local authorities and people to make the changes that will propel us towards a more circular and sustainable economy. It hinges on everyone playing their part, building partnerships to seize the opportunities that exist.’

If recognised, these opportunities would help to eliminate the idea of waste altogether, instead of putting extra stress on the resources and money required to recycle. Since 2001, recycling levels have increased from 11% to 43% — but the sheer scale of consumption means as a whole, we’re becoming increasingly wasteful.

The estimated value of unused electrical gadgets in UK homes is £320, and 23% of the electronic equipment taken to Household Recycling Centres still works. The average UK home contains £4,000 worth of clothes, 30% of which haven’t been worn for at least a year.

‘15% of the world’s population — Europe, North America, Australia and Scandinavia — consumes 60% of the world’s resources’, explains Cat. ‘In the UK we consume about 600,000 tonnes of new goods each year, every year. As first world nations we have an economic system that relies on the never-ending production of stuff to sell — to be consumed. The concept of ‘enough’ has been written out of our perceptions!’

The ‘emerging economies’ in Brazil, Russia, India, China and South Africa (BRICS) are going to be the new big consumers in the 21st century, and Cat predicts they will consequently become the new ‘big wasters’. The effects of 60% of the world consuming like we, the 15%, do now is a frightening prospect. Designers, manufacturers, retailers and consumers all need to work together to reconsider why, what and how we consume.

‘With the advent of new technologies and the industrialisation of just about everything, we have created a global structure that requires our mass consumption of tangible goods that are constantly updated — whether or not we need that stuff and never mind whether it’s fit for purpose’, says Cat. ‘It’s unrealistic to expect all product makers to be transparent with the information about their products if the dissemination of that information costs them money, threatens their core business or reveals wasteful practices.’ 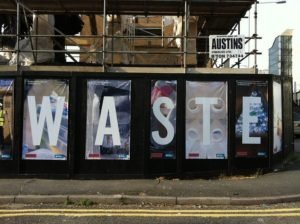 We need to encourage responsible manufacturers, retailers and services to raise the bar and lead the way by providing better products, marketing them widely and explaining to customers why they’re a better long-term investment. We need visionaries to lead the way so that sustainable consumption is an appealing model to producers, manufacturers, buyers and sellers, and is as convenient and rewarding as the system we are used to now. In some cases it already is: most people reuse already but don’t necessarily give it that name; hand-me-downs between families and friends, buying antiques and going to the local car boot market are all examples of reuse in action.

For Cat, what’s missing is an easy, mainstream, uniform collection system to stop reusable goods from being destroyed through the statutory waste management infrastructure of recycling, landfill and incineration. ‘We need to normalise the consumption of second-hand goods — especially on the high street’, Cat says. ‘It’s all still very hit and miss at the moment. There are some great enterprises underway like reuse shops at tips, IKEA’s work with the Furniture Reuse Network to re-home old sofas and M&S and Oxfam’s Shwopping partnership for clothes. Repair Cafés are popping up all over the UK and the number of social, people-powered enterprises — like ifixit and Freegle — is growing.

These schemes are all helping to extend the life of goods, but we need to scale up the easy, convenient options for people to pass on unwanted products and consume second-hand products. There are plenty of economic drivers that make this a viable disruption to existing business models — on top of the environmental imperatives to address resource scarcity, waste, carbon-intensive production, global transporting impacts and over-packaging.

Packaging has increased in volume because we now need to ship just about everything around the world, solve complex security problems and increase the advertising space on each item, to maximise savings and reduce risks to corporate profits. ‘Convenience and lifestyle aspirations increase the consumption of unnecessary products; we all feel time-poor and we’re ‘sold’ the idea that having ‘stuff’ will make our lives nicer, better and easier’, Cat says. ‘In fact, once a certain standard of living and a certain amount of stuff is consumed, one’s wellbeing does NOT increase.’

Having access to open space, health, education and connection to other people through community engagement maintains and increases our happiness, but advertisers have spent the last 60 years telling us otherwise: that owning more new and different things will make our lives better. ‘We are all caught up in a system that absolutely requires we buy tangible goods endlessly’, says Cat. ‘It’s a system that rewards profiteering above all else, and glorifies wealth and possessions. Popular culture celebrates over-consumption and encourages instant gratification, without ever revealing the real environmental costs. All our livelihoods are reliant on this consumption-based model, so it’s understandable that it’s so hard to break the habit!’

It’s easy to see why waste is the second-largest employer globally: we have a linear economic model that creates an end product called ‘waste’. To change the mould of how we might all earn a living, have a nice life and not create so much waste we — governments, business and citizens — all need to adopt some circular thinking so that ‘waste’ simply isn’t created in the first place. ‘Currently we just manage waste — badly. That’s partly because we create so much of it’, Says Cat. In a circular economy, ‘waste’ is understood as a resource with untapped potential, waiting to be transformed over and over again in an economic ecosystem that reuses what it’s already got.

‘Do we only care about immediate financial gains and convenience, or do we really care about long-term personal wellbeing, environmental sustainability and economic stability?’, asks Cat. ‘I think it’s the latter, but we all need to realise that what we buy sends back a message to government and business about what our core values are. I live in absolute hope that we can embed reuse into mainstream behaviour and institutional frameworks because it ticks all the boxes: it is good for People, Planet and Profit.’