Vivienne Westwood and Lush vs TTIP

Vivienne Westwood, War On Want and Lush come together to support groups fighting against TTIP 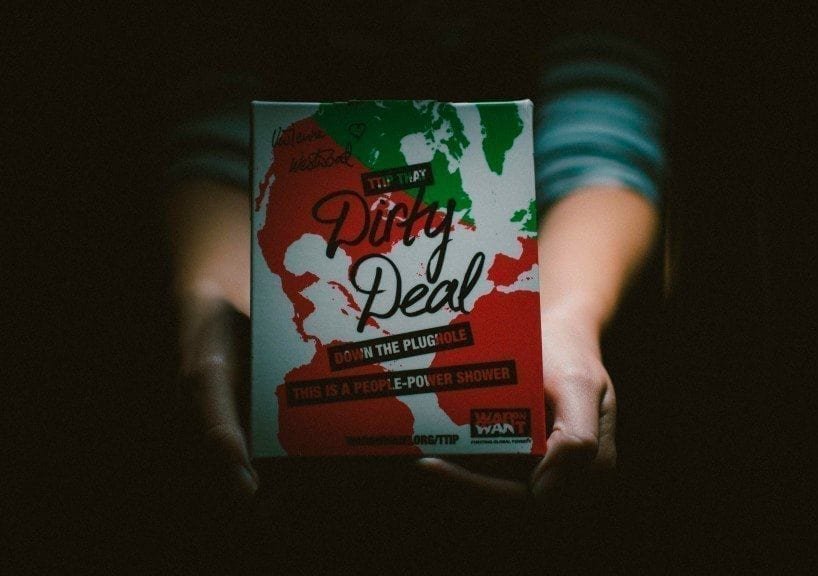 From 18 September to 01 October 2015, Lush will join forces with War On Want and Vivienne Westwood’s Climate Revolution in the fight against TTIP – a dirty deal being negotiated, in secret, between the European Union and the USA.

The campaign against Transatlantic Trade and Investment Partnership (or TTIP) is one of the most vibrant movements seen for years.

Lush shops in 14 countries across Europe will host anti-TTIP events and sell a limited edition shower powder – Dirty Deal Showder (£12.50) – with a box designed by Vivienne Westwood especially for the campaign.

22 lucky customers (six in the UK) will be the recipients of a box signed by Vivienne herself. All profit from the product will go to grassroots groups across Europe who are fighting back against TTIP.

Across Europe, over 2.5 million individuals have now signed the European Citizens’ Initiative saying No to TTIP. The talks began in 2013 and the coming months are crucial in the campaign as the EU and US governments try to rush this deal through.

‘TTIP is a deal which would give giant Monopolies supreme power. They would have more power than Governments! It’s anti-people. The line is drawn between Profit and People. People are dispensable. The Earth is dispensable.’

To kick off the campaign, Lush Oxford Street will host an open talk with John Hilary of War On Want and Nick Dearden of Global Justice Now to discuss this Dirty Deal our governments are signing us up to.

‘The more people learn about TTIP, the more outraged they become. TTIP is a threat to jobs, public services, food safety, environmental standards and our very democracy. War on Want is thrilled to be joining forces with 276 Lush stores right across Europe in the fight against this toxic trade deal.

‘Over 2.5 million European citizens have now signed a petition saying no to TTIP, and the coming months are crucial as negotiators try to rush through this dangerous deal that would put the rights of transnational corporations over and above the needs of people and the planet.’

According to official estimates, TTIP will cost at least 1 million jobs, undermine our most treasured public services, lead to a ‘race to the bottom’ in food, environmental and labour standards and give US companies special powers to sue any government in corporate courts for loss of profits.

TTIP is a deal that’s designed by business, for business. Governments secretly consulted the world’s biggest corporations about what they wanted TTIP to contain, and those same corporations lobby governments the hardest.

Negotiators say that TTIP will set the standard for all future trade and investment rules across the world. This means that TTIP will enshrine the rights of transnational corporations over and above the needs of people and the planet.

Click here for further information, to sign up for updates on what’s happening and join others fighting this anti-democratic trade deal.