Petitions with almost half a million names delivered to Downing Street, after UK exports 123,039 tonnes of plastic waste to Turkey in 2021 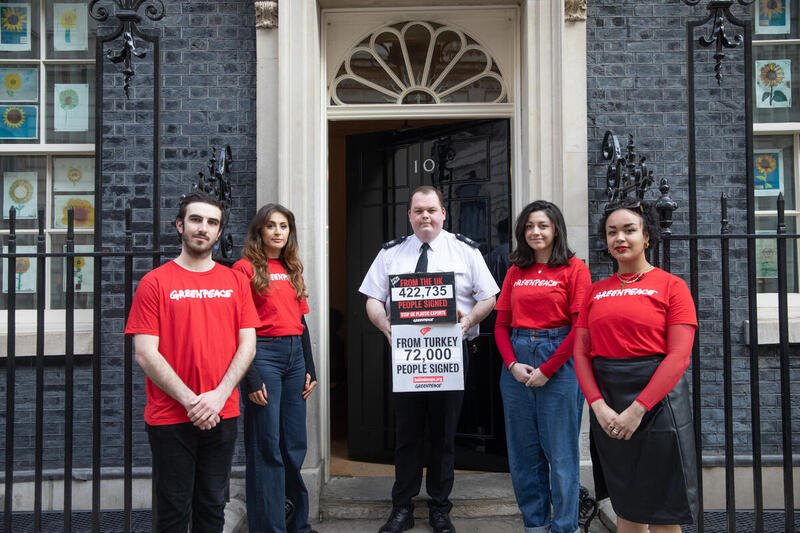 Greenpeace campaigners have delivered petitions from the UK and Turkey to 10 Downing Street, calling on the UK government to stop dumping plastic waste in Turkey.

While waste export figures from the UK to Turkey declined following last summer’s Wasteminster scandal, the export numbers have already started to creep up again.

‘The UK exported 486,000 tons of plastic waste alone to Turkey in the last three years. Even though Turkey’s imports seem to be decreasing with the introduction of the polyethylene ban for a period but following its abolition at a historic speed, we see that the numbers are climbing without any lessons being learned.

‘Turkey is neither the UK nor Europe’s garbage dump. At Greenpeace Turkey, with the Game of Waste report we published in February 2022, we witnessed that our land was 400,000 times more polluted than uncontaminated land. How many more animals and people are needed to be affected in order for all this waste flow to stop? The UK government must urgently learn to deal with its own waste within its borders and ban the export of waste.’

The UK is one of the largest producers of plastic waste on Earth, producing more plastic waste than any other country except the United States.

Our broken recycling system can’t handle the amount of waste we produce, so we rely on exports to deal with vast quantities of it.

Plastic waste exports are harming people and nature. A Greenpeace Turkey report found that across five dumping sites in Turkey where UK plastic waste was sent, all were contaminated by hazardous chemicals and at one site the level of toxicity in the soil was the highest ever recorded in Turkey.

Sliding down the agenda

The number decreased slightly in 2021 following Greenpeace campaigning, but has begun to rise again this year as the issue falls down the political agenda.

Greenpeace is demanding that the UK government immediately bans exports of plastic waste and tackles plastic pollution at source by reducing single-use plastic by 50% by 2025.

‘It’s shameful that we continue to dump our dangerous plastic waste onto other countries. While it’s out of sight and out of mind for us here in the UK, in Turkey where we’ve dumped it, the plastic pollution poisons the land, endangers peoples’ health and destroys nature.

‘Together with our friends in Turkey, we are calling on our government to end this disgraceful practice by immediately banning waste exports and reducing plastic use across society through ambitious reduction targets.’