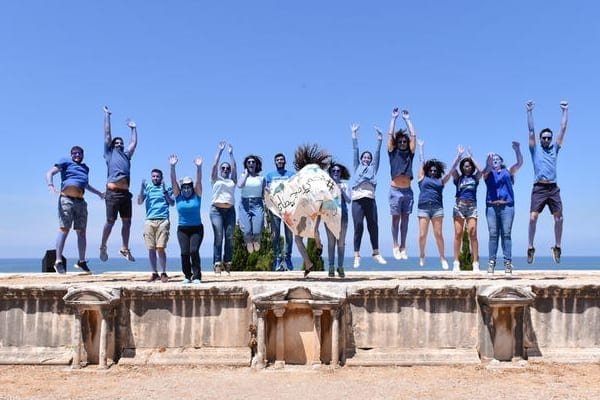 Today, on World Oceans Day, people are turning out in their hundreds at events across the UK to create ‘blue’ human waves in support of a global call to protect the world’s oceans.

‘Overfishing, climate change, mining and plastic pollution – our oceans are struggling. But now we have a chance to turn things around.’

From the beach at Bournemouth to the waterfront of Dundee, volunteers dressed in blue, wearing blue face-paint, are gathering at iconic landmarks in 50 cities and towns across the country to raise awareness of Greenpeace’s ‘Protect the Oceans’ campaign, which is calling for a Global Ocean Treaty to restore the oceans to health.

The largest blue wave event will take place in London in front of the Houses of Parliament on Westminster Bridge, where members of the public will be encouraged to sign a petition urging the UK government to champion a strong Global Ocean Treaty at the United Nations.

Greenpeace and scientists are pushing for a treaty that would create a network of ocean sanctuaries covering at least a third of the global oceans by 2030.

The second of four rounds of negotiation at the UN towards a treaty covering international waters took place in March and April this year. The third round of negotiations will take place at the United Nations in New York in August 2019, with the treaty process hopefully concluding with a fourth and final round in spring 2020.

‘People up and down the country are asking the government to step up and put its full weight behind a strong Global Ocean Treaty’, said Louisa Casson, oceans campaigner at Greenpeace.

‘UK ministers must do everything they can to create a global network of ocean sanctuaries that will protect whales, turtles and other marine life’, Louisa added. ‘Less than 5% of our oceans are currently protected. Urgent action is needed to safeguard sea-life from destructive activities like deep sea mining and overfishing.’

The state of our oceans

In April, Greenpeace launched one of the most ambitious expeditions in its history. The aim of the Pole to Pole Expedition is to mobilise public attention around the state of the world’s oceans.

A Greenpeace ship, the Esperanza, is undertaking a 10-month voyage, travelling from the Arctic to the Antarctic, highlighting key threats to ocean life along the way, such as climate change, plastics pollution, oil drilling and deep sea mining.

In June and July, the second leg of the expedition – led by Greenpeace UK – will journey to the ‘Lost City’ near the mid-Atlantic Ridge, to conduct research at this unique seafloor ecosystem of hydrothermal vents, thought to harbour clues to the origins of life.

‘We know more about the surface of Mars than we do about the deep sea’, said Louisa Casson. ‘Over one million square kilometres of the world’s oceans are currently at risk from companies and governments, including the UK, who have exploratory licences for deep sea mining that threaten ocean environments. The deep seas play a vital role in slowing the impacts of climate change and sustaining life on Earth. Profits must not be placed before protection.’

Click here to add your name to the Greenpeace petition calling for a Global Ocean Treaty.