Amazon up for sale 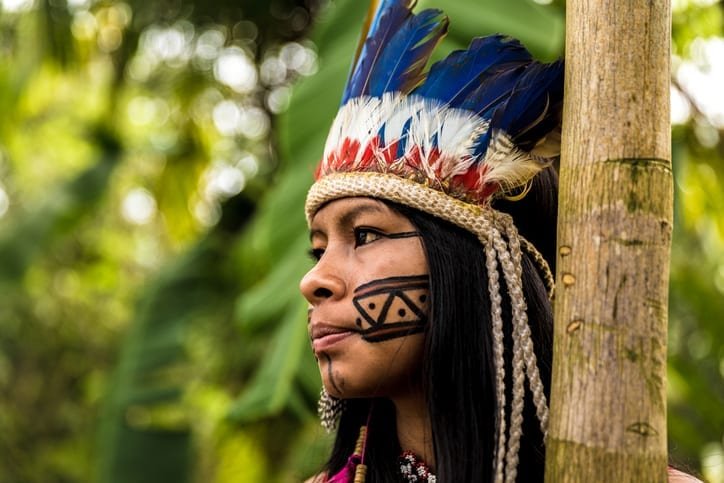 The bill – which brazenly violates Brazil’s constitution – sends a clear signal to the extractive industries that vast portions of the Amazon are up for sale.

The move places the future of the country’s indigenous territories and that of the Amazon rainforest in the hands of Brazil’s Congress and its Justice Ministry.

Indigenous peoples are denouncing the government’s proposal while demanding that their voices be heard. They reject any act that legalises mining on indigenous lands and demand their right to free, prior and informed consultation, as guaranteed by the International Labor Organization’s Convention 169.

‘Today, Bolsonaro signed a bill to permit mining and the construction of hydroelectric dams in indigenous territories. In his speech, he states that this is a ‘dream’ for him and that an indigenous person ‘is just as Brazilian as we [white people] are.

‘Your ‘dream’, Bolsonaro, is our nightmare and our extermination because mining brings death, illness, and misery and it destroys the future of our children. We know that this is your true dream, but we do not accept our institutionalized genocide, nor do we accept mining or hydroelectric dams in our territories.

‘We will not retreat. The blood that runs in our bodies is formed through struggle and resistance, and we will not let our nightmare come true. We are the original peoples of these lands; we were here many years before any white man arrived. To the Lower House Speaker, Rodrigo Maia, who stated he would shelve this bill as soon as he received it: We trust in you, Maia, to stand by your word.’

Mining activity in indigenous territories is regulated by Article 231 of Brazil’s Constitution, which guarantees indigenous people the right to decide on whether such activities be permitted on their lands.

It states that the extraction of ‘mineral wealth can only be carried with the authorization of the National Congress, after hearing affected communities.’ Bolsonaro routinely ignores the Brazilian Constitution, including the rights of indigenous peoples.

‘Illegal mining and illegal prospecting go beyond environmental degradation and deforestation. These activities provoke a breakdown of the social and cultural balance, which is already occurring in indigenous territories. In Yanomami lands alone, more than 20,000 miners are destroying forests and poisoning waterways with impunity, in the hope that their illegal acts will soon become decriminalized by the state.’

If approved, Bolsonaro’s bill has the potential to cause environmental devastation on at least 30% indigenous lands nationwide – an area equivalent to 28 million football fields – in the Amazon alone.

It would affect 160 ethnic groups, 12 of them living in voluntary isolation, according to data compiled by Brazil’s Socio-Environmental Institute (ISA). The number of indigenous peoples that could be affected and the risk of expansive deforestation show that industrial extraction at any cost would have a catastrophic impact.

The most coveted indigenous land is the Yanomami reserve, located between the states of Roraima and Amazonas. If the 536 requests (made by 58 companies) for this area advance to the final phase, mining could impact 42% of the Yanomami land, with the potential for destruction of 4 million hectares of forest.

In other cases, proposed mining concessions would cover 100% of indigenous territories, such as the Baú and Rio Paru d’Este territories in the Amazonian state of Pará.

Brazil’s Climate Observatory, an NGO coalition of environmental groups, issued a statement asserting that Bolsonaro’s bill ‘also deepens the reputational cliff Bolsonaro has shoved the country onto, consolidating the image of Brazil as a risky destination to productive foreign investment. Responsible investors concerned with the climate crisis will hardly take deforestation and indigenous blood into their portfolios.’

Immorality with ‘no limits’

This bill comes on the heels of Bolsonaro’s appointment of a former evangelical missionary, who has previously pledged to convert every last ‘unreached people’ on Earth, to head of the department for isolated and recently contacted tribes at the indigenous agency FUNAI.

Bolsonaro’s administration also interrupted the distribution of food baskets to 3,000 indigenous families living in indigenous territories not recognised by the state, essentially leaving their families to go hungry.

‘Bolsonaro’s immorality has no limits’, said Amazon Watch’s Christian Poirier. ‘We are witnessing not only the destruction of the Amazon rainforest but an indigenous genocide foretold’.