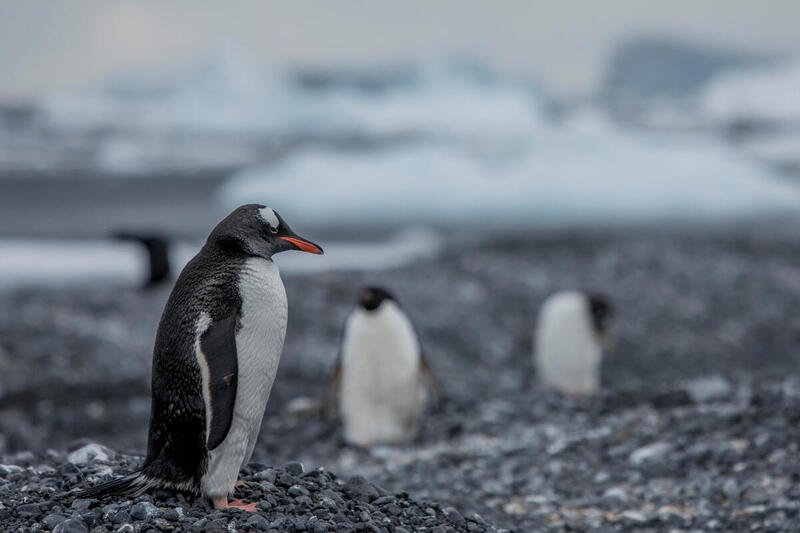 New penguin colonies not previously known to science have been found in the Antarctic by researchers from Stony Brook University.

These are some of the southmost records for gentoo penguins breeding on the eastern side of the Antarctic Peninsula, where until recently it was far too icy for the more temperate gentoo penguin to successfully raise chicks.

Before this discovery, only one solitary gentoo nest had been found this far south, but researchers have now discovered a colony of 75 gentoo chicks on Andersson Island.

‘This is the climate crisis happening right in front of our eyes. In the Antarctic, one of the most remote places on Earth, we are seeing a ‘gentoofication’ process where this species of penguin is spreading into new habitat and breeding further south: a biological manifestation of sea ice loss.’

The scientists, sailing on a Greenpeace expedition to the region, found new evidence of gentoo penguins – a species most abundant in the warmer sub-Antarctic – continuing to move south as the climate crisis impacts the continent.

‘On this expedition, we’re surveying parts of the Antarctic Peninsula where penguin colonies have been spotted from satellites but have never explored by foot. Mapping out these remote archipelagos will give us a better understanding of how the region’s penguins are responding to rapid climate change. As expected, we’re finding gentoo penguins nearly everywhere we look – more evidence that climate change is drastically changing the mix of species here on the Antarctic Peninsula.’

Penguins are a sentinel species and a great indicator of the health of the Antarctic ecosystem. They are experiencing significant changes in the Antarctic due to the rapidly changing climate and industrial fishing.

A recent expedition to the Antarctic found that chinstrap penguin colonies at Elephant Island had collapsed, some by as much as 77 percent in the last 50 years.

Scientists are carrying out the first-ever counts of penguin colonies in remote islands on the eastern Antarctic Peninsula, filling vital data gaps about the status of these iconic animals.

Governments have repeatedly failed to create ocean sanctuaries in these Antarctic waters, leaving these important penguin habitats unprotected. Ocean sanctuaries are a key tool to help marine life cope with the rapid changes.

‘This has to be a year for action. Governments need to agree a new Global Ocean Treaty to deliver protection for at least 30% of the world’s oceans by 2030 – and they must get to work by protecting the Antarctic’s waters. Penguins and people across the world can’t wait: we need politicians to get ocean protection done now.’