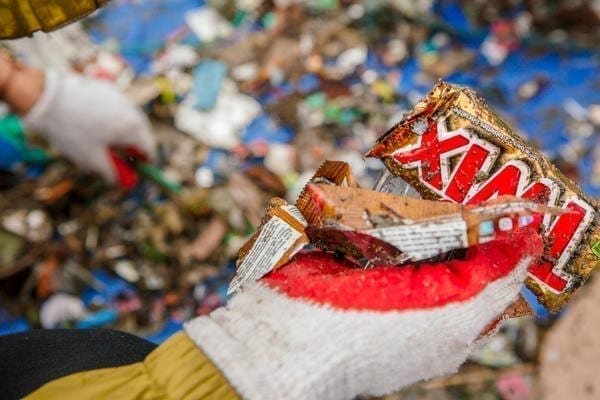 None of the major consumer goods giants responsible for most of the single-use plastic in circulation have any plans to reduce the amount of plastic packaging they produce, a global survey shows.

The Greenpeace survey of 11 world-leading brands including Coke, Nestlé and Procter & Gamble, also reveals ‘most of these companies do not know how much of the plastic packaging they produce is actually recycled, even less about its destination after it has been used’. Greenpeace adds that the brands ‘are also unwilling to disclose the small amount of information they do know.’

The findings come as the UK government and the plastics industry are coming under growing pressure to get to grip with our plastic waste problem.

A joint investigation by Greenpeace’s Unearthed and the Daily Telegraph has discovered plastic waste from UK households at multiple illegal dumps in Malaysia. At the same time, the Environment Agency is reportedly investigating suspected abuse and fraud within the export waste system.

Plastics production on the rise

The survey is featured in a new Greenpeace report, which highlights how recycling alone cannot tackle the growing ocean plastic crisis. It cites research showing that only 9% of plastic produced globally between 1950 to 2015 was actually recycled.

At the same time, plastic production and the use of single-use plastic is increasing substantially year on year: projections indicate plastic use will quadruple by 2050 if we continue with business as usual.

‘If you follow the flood of plastic waste all the way upstream, you will end up in the production lines of some of the world’s best-known brands,’ says Louise Edge, Greenpeace UK’s senior oceans campaigner. ‘That’s the main source of the problem and this is why it’s so worrying that none of these brands have any commitments to reduce the amount of plastic packaging they churn out in the first place.’

‘The major plastic producers can no longer hide behind commitments to just improve the recyclability of their packaging’, Louise added. ‘Anyone can see that our recycling system is simply overwhelmed by the amount of plastic waste we throw in our bins, and just because a product is recyclable it doesn’t mean it actually gets recycled. This is why we need these companies to cut the amount of single-use plastic they produce while governments like the UK should use the tax system to force brands to take responsibility for their waste.’

Greenpeace surveyed 11 companies including Coca-Cola, Colgate-Palmolive, Danone, Johnson and Johnson, Kraft Heinz, Mars, Nestlé, Mondelez, PepsiCo, Procter & Gamble and Unilever in 2018. Analysis of the results revealed a lack of transparency in the sector, with few FMCG companies willing to disclose important data about their plastics use.

None of the companies have commitments or targets to reduce their current dependence on single-use plastic packaging.

Most FMCG companies know, or disclose, little about the amount of their packaging that is actually recycled – and even less about the destination of their plastic packaging after it is used.

Despite their significant plastic footprint, solutions being explored by businesses are primarily relate to addressing recyclability or recycling, not reducing single-use plastic packaging or looking at better alternatives.

The FMCG sector represents one of the largest industries worldwide. Most FMCG companies are growing at between 1 and 6% each year. If current trends continue, their use of single-use plastic will increase in parallel.

Click here for the 2017 brand audit results for plastic pollution.