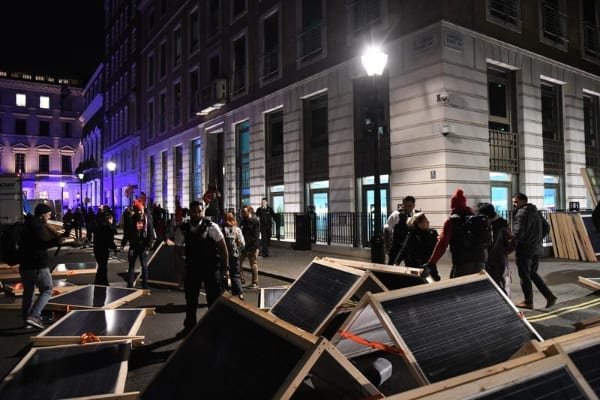 All six office doors around the building were blocked, with activists locked to dirty oil barrels to prevent staff from entering.

Police prevented the activists from installing the panels on the pavements and roads surrounding the offices, but 50 activists blocked the road outside the HQ until 08.45.

At 11.30, seven Greenpeace activists were left blocking BP’s HQ. The volunteers remained locked on to dirty oil barrels in front of the doors of the building, where they have been since just after 03.00.

15 arrests were made; the solar panels were quickly grabbed and stacked in a messy pile on the pavement by a 40-strong, ‘heavy-handed’ police presence that also arrived just after 03.00.

Police also forcefully removed activists attached underneath the panels, then began work on cutting free those chained to oil barrels.

Despite this, 24 activists managed to peacefully block all six office doors around the building, preventing staff from entering.

In its response, BP relayed the feelings of its new boss, Bernard Looney, who spent his first day in the job at Gelsenkirchen oil refinery in Germany.

BP said: ‘He understands the frustration and anger of protestors in London… and will set out his low carbon ambition for the company next week. He hopes that what he has to say then will give people a sense that we get it and are very serious about working to address the problem.’

‘Bernard Looney says he ‘gets it’ but his company has been lying to the world about the climate crisis they created my whole life and Looney was working there the whole time. They’re out of time, we’re out of patience and they need to get out of the oil and gas business entirely. If Looney wants young people like me to believe that he ‘gets it’, that’s what he’ll announce next week.’

BP has caused more carbon emissions in the last 50 years than any other European company, and is currently the highest-spending lobbyist against climate legislation amongst the oil majors.

Yesterday was the first day on the job for BP’s new CEO, Bernard Looney, who is expected to commission a report on BP’s future direction in a warming world, to be published in the summer.

Despite the warm words, BP still intends to spend $71 billion developing new oil and gas fields this decade – that’s £32 for every £1 it invests in renewables – and it is a world leader in lobbying to block legislation that could speed up the decarbonisation of our economy.

The Trump administration has given a significant boost to BP’s efforts in recent years, abandoning or weakening environmental regulations at BP’s request.

‘This morning police managed to block our solar installation, but BP are trying to block the transition to clean energy on a global scale. Their lobbyists have the ear of governments around the world, they spend millions blocking action to fix the climate emergency and billions on drilling for more oil and gas to make it worse. Floods, droughts, forest fires and hurricanes all over the globe start right here with the plans made in BP’s headquarters.

‘Their new CEO needs to accept that if BP wants to keep trading in the twenty-first century, they need to switch to 100% renewable energy. We’re not going to settle for a green-themed rebrand, solar panels on their petrol stations or wind turbines on their oil rigs. The only realistic response to the climate emergency is to cut emissions. BP need to stop wasting billions drilling for more oil and gas that we simply can’t burn, and produce a plan to get out of the oil business entirely.’

Greenpeace said the activists will be keeping the offices closed to ensure that Mr Looney’s mind is focused on the most important part of his new job: how to stop causing the climate crisis.