More and more people are changing their shopping habits and favouring small-scale suppliers over the soulless glow of the supermarket. Some have always supported their local independents, but there’s also a steadily growing tide of consumers who are starting to feel there’s something wrong with the way things are.

According to Deloitte’s Global Powers of Consumer Products 2014 report, net sales of the world’s 250 largest consumer products companies were in excess of $3.1 trillion in the 2012 financial year, meaning an average company size of $12.5 billion. Only companies with sales of over $3 billion in 2012 made it into the ranks of the top 250 ‘global powers’ — and only seven of those had origins in the UK.

There’s something very, very unsettling about that. It’s not just about where our money’s ending up (and where it’s not) or what it’s being used for (and what it’s not) — it’s also about the situation on the ground for the suppliers and producers.

Defra figures indicate that, compared with 1945, the average cereal farm now produces three times more per hectare. Better management techniques and improved plant varieties have had a significant part to play in this — but, according to an Andersons report, ‘the use of synthetic pesticides has both enabled and protected these gains.’

Some of these pesticides, grouped with other Plant Protection Products (PPPs), are now being threatened under EU legislation; if banned, the total UK farming income could plummet by £1.73bn — a 36% drop in overall profits — and mean ‘iconic’ British foods such as frozen peas, apples and fresh carrots ‘would be severely curtailed’. The report suggests the impact on the food processing and manufacturing sector’s associated workforce would be job losses of 35,000 to 40,000, while the agricultural supply industry, including wholesalers, could face job losses of 3,500-4,000. 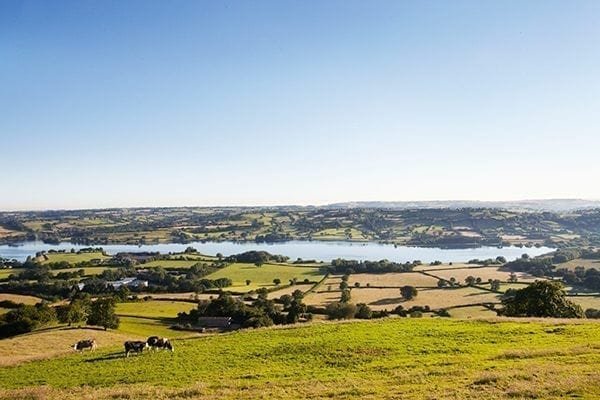 The Food and Agriculture Organisation (FAO) of the UN predicts that there will be 9 billion people in the world by 2050, and that a 70% increase in food production will be required to keep such a huge population alive. At the same time, University of Sheffield research suggests that the UK only has 100 seasons left in its soil due to intensive over-farming.

Rising demand and dropping food prices mean farmers and producers need to find new ways to get maximum yield from the resources available. A cow in a mechanised, American-style indoor dairy — the likes of which are now making their way to the UK — can produce over 11,000 litres of milk, compared with the 4,000 litres per year produced by the average British cow 40 years ago and the average 7,327 litres produced last year.

With global milk prices plummeting — and UK dairy farms closing as they find themselves selling milk for less than it costs to produce — this style of dairy may soon become the norm in the UK. The Guardian recently reported that the current cost of production for a dairy farmer supplying to Tesco is around 31.5p per litre; the best milk contracts pay dairy farmers 32p per litre, while the worst pay just 26p — representing £90,000 in lost revenue to the average UK dairy farmer. DairyCo figures for the 2012/13 milk year show a decrease in England’s Dairy Farm Business Income (FBI) of 40.5% when compared with 2011/12.

In order to keep driving supermarket profits, something will have to give; either the quality of the products we end up consuming will have to decrease, or the price paid to the producers will have to drop. Those fighting to maintain high standards of animal welfare and preserve environmentally sustainable techniques could well go out of business unless we’re prepared to pay more to fund these principles.

But on the surface, it looks like we do. We’re turning our backs on brands that seems to control the biggest chunks of the market and are instead opting to support independents with more style, flair and personality — and which produce healthier goods with a focus on more sustainably sourced ingredients.

The shift hasn’t gone unnoticed; some of the most powerful brands on the high street have been given a facelift in a bid to show customers that they’ve changed course and that they, too, are becoming more eco-aware; the lurid red and yellow of McDonald’s has been replaced with a more muted and self-conscious green or black, while Starbucks has dropped the company name from its logo altogether.

Still, we’re not daft — and deep down the mega-brands know it. When you’ve spent fortunes on building up a brand identity that blazes from every major high street and calls to something deep in the consumer consciousness, it’ll take more than a lick of paint to change it.

Instead, some major players are accepting that they’ll never have the same credibility enjoyed by smaller players; rather than trying to compete, they wait in the wings while independents establish a reputation in the market and then simply buy them up. In some cases, the option to buy may have been agreed a long time beforehand, with the smaller company enjoying investment and support from a global competitor until it’s grown into a loved name with a loyal fan base — and is worth buying.

Tim Mead, CEO of Yeo Valley organic dairy, has seen this happen time and again. ‘It’s a modern phenomenon that the greatest danger to the top brands in a sector comes from others that have not yet been born’, he told PQ. ‘As a result, larger branded companies have allocated resources to spot and take stakes in potentially successful start-ups; their involvement hugely increases the brand’s chance of success, when compared with the start-up trying to go it alone and grow while also remaining independent. Innocent was helped along by Coke and Green & Black’s by Cadbury.’ When Cadbury was bought by Kraft foods, Green & Black’s became financially controlled by the second-largest food company in the wold.

This muddies the water for consumers who are trying to make conscious decisions about which brands to support; companies that appear British and independent could have been snapped up by international businesses, or may never have been independent in the first place. Rachel’s Organic yoghurt has a great Welsh heritage and has become a British institution, but is owned by Lactalis, a group with a self-confessed ‘commitment to large-scale milk processing in all its forms’. Seeds of Change started life selling ethically traded organic seeds, but was snapped up by Mars when it branched out into other areas. The upshot is that every pound you spend on brands you want to support could well end up in the accounts of the companies you’re trying to avoid. ‘Most bigger players have access to market capital as opposed to debt’, explains Tim. ‘They also have a stable of brands, so a success rate of 50% is acceptable. They win some, they lose some.’

Yeo Valley is one British brand that has retained its independence and all the freedom that comes with it. The Mead family has been farming in Somerset since the 1400s, and Mary and Roger Mead moved to Yeo Valley over 50 years ago. They started out with just 30 cows, a few sheep and some arable crops — and the farm has now grown into to the UK’s number one organic dairy brand.

We went to visit Tim Mead and his wife, Sarah, to find out how they’d been able to succeed where other brands had failed; 50 years after setting down roots in the valley, the independent, family-run farm has received three Queen’s Awards for Sustainable Development and the Good Dairy Award from Compassion in World Farming. The Meads have also set up a field of solar panels to power the milk bottling plant and a crop of elephant grass, a sustainable biofuel for the boiler in the farm’s head office.

The farm has only ever had British Friesian cows. Lots of farmers went all-American in the ‘70s and ‘80s with Holstein herds that promised more milk, but — as I suspect is the case with most things they do — the Meads took the common sense approach: British Friesians are more fertile, live a lot longer and are better suited to the farm’s grass-based system.

Cows’ needs change with age and with the seasons, but organic cows always need organic feed — the vast majority of which is produced from the farm’s acres of arable land and grassland. Once weaned, the cows go outside to graze clover and grass in the fields, and are also fed a mix of silage (‘pickled grass — it’s delicious’), crimped wheat and other cereals. Pretty much all of the feed’s grown at the farm and individual cows are given their own special mix, depending on what they need each day.

The Meads also helped to form the Organic Milk Suppliers Co-operative (OMSCo) in 1994, after The Milk Marketing Board — which bought all the milk in Britain — was broken up. It was suddenly down to the farmers to find new buyers for their milk; Mary and Tim talked to a handful of local organic farms about pooling their milk together so they could buy large volumes for their famous Yeo Valley Yeogurt — and so OMSCo was born.

The farm also grows organic food to feed its staff, uses 100% green electricity and manages 50 acres of land as habitat for wildlife. The list goes on. But there’s something else that stands about this family; there’s no sense of outrage when we talk about companies selling out without giving their customers a heads up, and no complaints about the injustice of competing in a market where the odds are heavily stacked against the success of independents.

Instead, Tim and Sarah seem more interested in having a laugh, spending decent time together as a family and making the working environment at Yeo Valley as much fun as possible. We headed to the local pub for a Sunday roast, went for live music and a dance at a great local festival (‘Mini-V’) and had time to enjoy the farm’s on-site café and stunning landscaped gardens — which, in line with the Meads’ tendency towards openness, was recently opened to the public.

Photographs of all the things that make the Meads smile — from the rather handsome gardener to cover art from their favourite albums — line the corridor leading into a bright meeting space with spectacular views across the valley. The atmosphere is open, honest and genuine — a quality that can perhaps only ever be created by a group of people doing everything they think is important, and doing it exactly how they want.

It’s not impossible to do things differently, and it was quite obvious from our visit that there’s a lot of fun to be had when you do.