The community energy project that will transform land and lives The Chelwood solar scheme is a community solar energy project in Chelwood, near Bath, that will see a 5MW ground-mounted PV panel installation constructed across 22 acres of of low grade farmland near the village of Chelwood in the Chew Valley, south of Bristol.

The scheme has been registered with Ofgem, meaning the Feed-in-Tariff (FiT) is set at the 30 June 2015 level and won’t be affected by the the government’s proposed changes to renewable energy support. 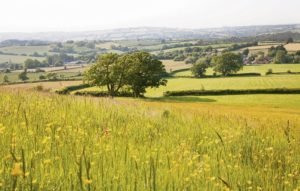 Chelwood Community Energy was set up to reduce the impact of climate change and increase energy security, generate significant community benefit, support the local economy and protect and enhance wildlife habitats and biodiversity.

The proposed site is considered to be of low ecological value, so its development and management would help to improve local biodiversity. A biodiversity management plan has been created to protect and enhance animal habitats on and next to the site. In time, it’s hoped that protected species, such as bats and great crested newts, will be attracted to the area.

The site’s entire operational area is currently used as pasture; this will be maintained to provide a habitat for invertebrates, mammals and ground-nesting birds such as the skylark.

The grassland will be grazed during autumn and early spring to minimise disturbance to reptiles and amphibians.

This development is ‘reversible’, meaning it will be dismantled and taken away at the end of its life. The planning permission granted to the development is temporary, and the conditions state that all equipment must be taken away after 25 years. The cost will be covered by a decommissioning fund taken from the scheme’s revenue.

The shallow steel screw pile foundations minimise ground impact and can easily be taken up when the solar scheme is decommissioned, allowing the field to return to its former state. The farmland’s use as a solar farm won’t affect its agricultural value, but its biodiversity and habitat richness will be enhanced. 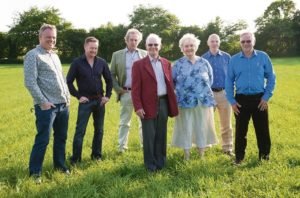 Once operational – by the end of the year, if all goes to plan – the FCA-regulated Chelwood solar scheme will produce 4,844MWh of electricity per year, which is enough to meet the annual electricity consumption of 1,160 typical homes.

Payments to the independent Chelwood Community Benefit Fund are an important part of this project: projections indicate that up to £1.2 million will be made available over the project’s 25-year lifetime.

The expected return for investors is an RPI linked 5.5%, which means returns should start at 5.5% in year one and then increase with RPI. The project has also been given Advance Assurance from HMRC for EIS tax relief, meaning the total expected return is estimated at 9.2% gross per year.

Any profits left after members have been paid will be contributed to the Chelwood Community Benefit Fund, which will help finance local infrastructure projects, wildlife conservation measures and schemes that address energy efficiency and local fuel poverty.

The base case financial projections indicate that, over 25 years, up to £1.2 million will be available for distribution to local communities through this fund.

Anyone over the age of 18 can buy shares in the Chelwood solar scheme before the share offer closes on 24 August 2015. Shares are £1 each, with a minimum investment of £500 and a maximum investment of £100,000. People living within five miles of Chelwood village can invest as little as £200.

As a member you will be able to vote at the AGM, elect directors, have a say in how the Chelwood Community Fund is run and receive interest on your shares.

All investments carry risks; make sure you read the Share Offer Document at chelwood.org before you make any decisions. More information can also be found at ethex.org.uk.