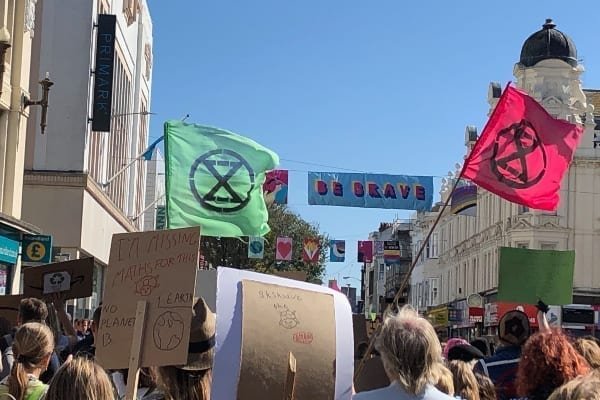 6.6 million people from all regions and backgrounds demand action after week of climate strikes

From 20-27 September, millions of students, parents, trade unions, businesses, health workers, scientists, celebrities and people of all backgrounds, ages, regions and faiths came together in the streets in all corners of the globe calling for climate action.

‘We strike because we believe there is no Planet B and that we should do everything in our power to stop this crisis. Otherwise my dreams of having a happy future will be taken away from me as well as all the other kids all over the world.’

The ‘climate week’ surrounded the UN summit, which gathered political leaders in New York City in an attempt to discuss emergency actions to confront the climate crisis.

While young climate activists were giving powerful speeches to the authorities, only a few metres away major multinational oil company CEOs were meeting with government representatives and diplomats in another lobbying effort to shape and influence climate policy.

‘This week was a demonstration of the power of our movement. It was inspiring and historic. People power is more powerful than the people in power. It was the biggest ever climate mobilisation, and it’s only the beginning. The momentum is on our side and we are not going anywhere.’

‘Crimes against our future’

The next years are crucial to meet the goals of the Paris Agreement, and that means drastically cutting global emissions of greenhouse gases.

But while the planet heats up and entire communities lose their lives and livelihoods, the big fossil fuel companies keep profiting from coal, oil and gas.

‘We will keep fighting until the politicians stop ignoring the science, and the fossil fuel companies are held responsible for their crimes against our future, as they should have been decades ago.’

On 23 September, 350.org and partners unfurled a giant banner reading ‘ExxonKnew: Make Them Pay’ outside the summit, to expose the responsibility of big companies fuelling the crisis.

‘The path forward is clear: stopping all subsidies and end funding to the fossil fuel industry’, said May Boeve, executive director of 350.org. ‘Anything short of this would mean betraying once again the millions that have gone on strike for the climate this week. To fossil executives and those in power, we say: ‘How dare you!’ You knew, you lied and we will make you pay for the crisis you have created.’

Rally for the imagination

On Friday 27 September, the final day of Global Strike for Climate, Culture Declares Emergency teamed up with Architects Declare Emergency and Music Declares Emergency, along with their 2000+ signatories, to host a ‘Rally for the Imagination’ in Trafalgar Square.

The rally was in response to Caroline Lucas’ Letter to the Earth, in which she says that although it’s ‘not an easy thing to admit… politics has failed’ in addressing the urgent action needed to tackle the climate and ecological emergency. She goes on, ‘Political failure is, at root, a failure of imagination’.

Asking for direct help from the Culture sector, Caroline Lucas asks artists to ‘paint the positive pictures of how the world could be – and to tell the vivid and compelling stories that show us that, when people come together and act, there is always hope’.

Speakers at the rally sowed the seeds for creative individual and collective responses to the emergency, giving examples of creative work already underway.

A letter closing the rally called on the Arts Council to place the Climate and Ecological Emergency directly at the heart of its 2020-2030 year strategy.

It asks the Arts Council to look at how culture can support the necessary re-imagining of our future and how people, communities, nations and planet can mitigate the worst of the impacts, adapt to them and help reduce suffering.

Over the next 12 months, a series of escalated actions are being planned in different regions of the globe to continue to exert pressure on governments.

Joel Enrique Panichine, organiser from Fridays for Future Chile – the country that will host the next UN Climate Summit in December (COP 25) – said the movement in Latin America won’t stop until the world leaders hear them and concretely start phasing out fossil fuels.

He said: ‘Today in Chile we marched from Arica to Punta Arenas, where people of all ages, organisations and institutions gave their voice, a voice that bravely rises to ask politicians of the world for no more double speeches and more actions that seek the ‘good living’, or as they say in my community, the küme mongen’.

Joel self-identifies as part of the Mapuche people and says that fighting for the climate also means honouring the values of all indigenous peoples and traditional communities around the world.

The week in numbers

Click here to read our article about how UK banks continue to fund climate disaster.