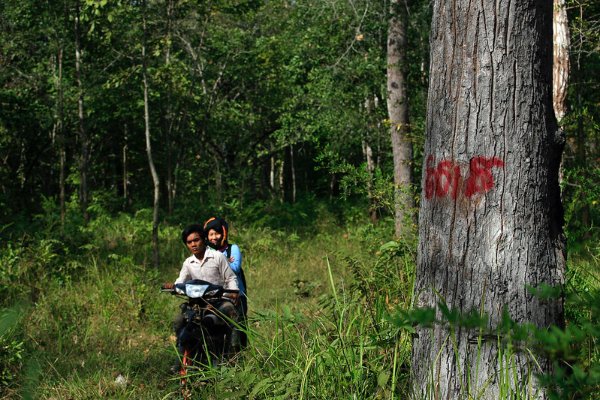 The illegal logging of protected forests is erasing the traditions and culture of Indigenous peoples in Cambodia, new research by Amnesty International has revealed.

In a new report, ‘Our Traditions Are Being Destroyed: Illegal Logging, Repression, and Indigenous People’s Rights Violations in Cambodia’s Protected Forests’, Kuy people tell how deforestation and government restrictions on access have harmed their spiritual practices, land rights, livelihoods and ability to protect the forest.

Cambodia has experienced one of the highest rates of deforestation worldwide in recent decades, losing approximately 64% of its tree cover since 2011 alone.

A remote sensing calculation using currently available data sources shows that in 2021, 6,271 hectares – an area in size equivalent to 8,784 football pitches – were deforested.

‘Rampant illegal logging in Cambodia is posing an existential threat to the country’s remaining primary forests, and the Indigenous peoples who depend on them for their livelihoods, their culture and their spiritual practices.

‘Cambodia’s approach to conservation is characterised by official corruption and a complete disregard for Indigenous peoples’ rights. If the Cambodian authorities don’t change course soon, the country’s protected forests will be illegally logged into oblivion.

‘It is essential that Indigenous-led community groups are enabled and empowered to engage in forest patrols and other protection activities. Indigenous peoples are widely recognised as the most effective protectors of their traditional lands, and Cambodia’s ongoing ban on community groups’ access is a blatant violation of their human rights.’

The report is based on interviews with community activists involved in the protection of Prey Lang and Prey Preah Roka, both of which are home to significant Kuy populations and which also contain protected wildlife sanctuaries.

Under both domestic and international human rights law, the Cambodian authorities have legal obligations to protect Indigenous people’s human rights, including their cultural rights.

Cambodia is home to approximately 24 different Indigenous peoples, and the Kuy people are one of the largest of these groups.

Indigenous peoples in Cambodia often maintain a close connection with the traditional forested lands on which their livelihoods and cultural practices depend.

All of the Kuy people interviewed by Amnesty expressed concern that their cultural survival was threatened by extensive deforestation of both forests.

Thyda* described the detrimental impact of deforestation for the next generation: ‘I feel like there is almost nothing left of our culture. The younger generation will never get to know all the important places for us in the forests…There are ancient villages that were once inside the forest, and we still pay our respects to spirits of our ancestors. Now, these places have been destroyed because of logging.’

Kuy people around Prey Lang and Prey Preah Roka depend largely on the sustainable use of the forests for their livelihoods, including through resin tapping, a practice that does not ultimately harm trees and can continue for decades.

The resin is sold and used domestically for low-grade lighting, and commercially for boat caulks, paints and varnishes. However, illegal loggers have increasingly targeted resin trees for use in timber production.

Two species of resin trees found in Prey Preah Roka are particularly sought after by loggers because of their suitability for furniture production and are commonly used in making tables, doors, chairs, beds and ceiling beams.

Thyda* told Amnesty that an estimated 70% of resin trees have been lost in Prey Preah Roka in recent years, and added: ‘Many people from outside… come and steal our trees when we are not in the forest -–especially during the rice season when we are planting saplings or harvesting rice. This is when they get stolen the most, because people know we are busy in our fields which are far from Prey Preah Roka. Sometimes in one day, 30 or 40 resin trees will be cut.’

Interviewees in Prey Lang also told how loggers would sometimes offer to buy resin trees from community members, who said they felt they had little choice but to accept whatever price was on offer, as the tree would be felled regardless.

Across both forests, Kuy people consistently described how police officers and Ministry of Environment officials demanded and accepted bribes in return for ignoring illegal logging.

One interviewee familiar with the situation in Prey Lang said: ‘The big problem is that the authorities, especially the Ministry of Environment, are only interested in collecting money. I have tried many times and gone directly to the ministry’s provincial office and told them about logging and given them photos and other evidence. They go to investigate it – but they only investigate it to collect [bribes] from the loggers.’

All interviewees told Amnesty they had witnessed police from local posts blatantly accepting money from loggers as they transported their hauls from the parks, and that police had several checkpoints set up solely to extract money from loggers.

Amnesty has also previously documented how Cambodian authorities have denied environmental activists access to the rainforests, and how their ongoing ban on community patrols is allowing illegal logging to continue unchecked.