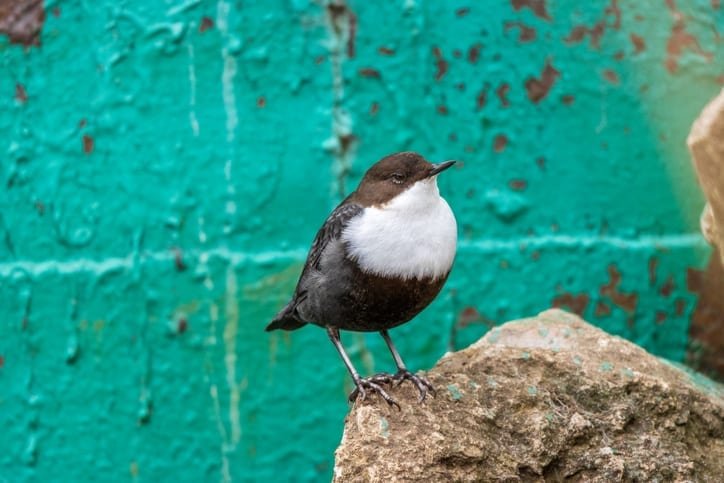 Dippers swallow hundreds of plastic fibres every day via their insect prey, according to research by Cardiff University and the Greenpeace Research Laboratories at the University of Exeter.

The river birds also inadvertently feed thousands of plastic fibres contained in insects to their nest-bound chicks during their development.

The aquatic songbirds depend on river insects for their food supply, so widespread contamination of insects by plastic means they cannot avoid this source of pollution.

This new study is the first to show clearly that microplastics – pieces of plastic debris under 5mm in size – are being passed through river food webs from insects to predators such as dippers.

The academics said the transfer of so many plastic fragments to nestling birds was startling – and there was an urgent need to further understand the consequences of this plastic intake.

‘In almost 40 years of researching rivers and dippers, I never imagined that one day our work would reveal these spectacular birds to be at risk from the ingestion of plastics – a measure of how this pollution problem has crept upon us.

‘The same features that make dippers so wonderfully adapted as the world’s only songbirds able to dive and feed on river insects, also mean that they can have no escape from this enormous source of pollution for decades to come.

‘It is imperative that we understand whether microplastics add to the other pollution problems that affect dippers and other river organisms, and that we use that knowledge to guide remedial action.’

Plastic from clothes and buildings

The team, from Cardiff University’s School of Biosciences and Water Research Institute, and Exeter’s Greenpeace labs, examined droppings and regurgitated pellets from adults and nestling dippers.

They found microplastic fragments in roughly half of 166 samples, at 14 of 15 sites studied, and in the greatest concentrations in more urbanised locations. Most were fibres from textiles or building materials.

Although microplastics appear to be voided by the birds as fast as they are ingested, the team stressed the need to understand more fully any adverse or toxic effects from such a large daily intake.

Previous research by Cardiff University scientists has shown that half of the insects in south Wales rivers contain microplastic fragments.

‘Our analysis showed that the dippers in the study were ingesting around 200 plastic particles daily from the insects they consume. More than 75% of the fragments we found were less than 0.5mm in size, but some were up to several millimetres in length.

‘We have known for some time that microplastics including polyester, polypropylene and nylon, pollute Britain’s rivers. But our forensic approach now reveals how extensively these materials contaminate freshwater food webs. The impact of the chemicals and pollutants in these plastics on dippers and their chicks remains to be seen.’

Joe D’Souza, who began the investigation as an undergraduate student at Cardiff, said: ‘Amidst concern about the oceans, it’s increasingly clear that plastics also affect organisms in rivers: these are a major route between land and sea for microplastics such as clothing fibres, tyre dust and other fragmenting plastic waste.

‘The fact that so many river insects are contaminated makes it inevitable that fish, birds and other predators will pick up these polluted prey – but this is the first time that this type of transfer through food webs has been shown clearly in free-living river animals.’

Professor Ormerod added: ‘In the depths of the current, global circumstances around Covid-19, the problems of plastic pollution remind us that other, major environmental problems haven’t gone away; we can’t afford take our eyes off these other pressures and what they mean for the way we build our future lives within safe environmental limits.’

The research was published in the journal Global Change Biology.