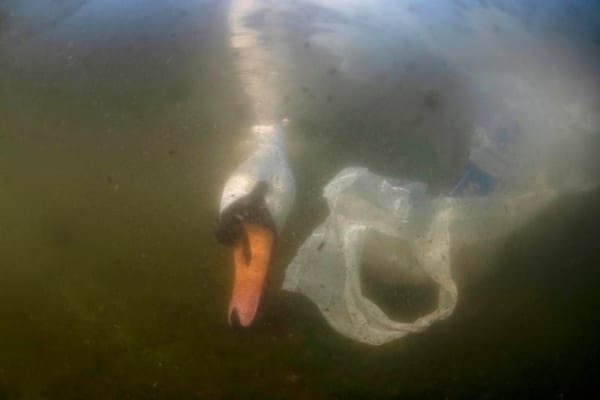 The pictures – some of them new, some rarely seen or previously unpublished – show otters swimming through plastic bottles, voles eating plastic and swans, moorhens and coots with plastic in their nests.

‘I was shocked to learn that most of the plastic that I’ve ever used is still somewhere here on Earth. And yet every year we just keep producing more and more. Together with Greenpeace, and the thousands of people who have signed their petition, I’m urging the UK government to set targets to reduce single-use plastics.’

The images are released as Greenpeace carries out the most thorough survey of plastic in UK rivers to date. Campaigners are gathering water samples from 13 rivers across the UK and scientists will be analysing the plastics found using state-of-the-art infrared technology at the University of Exeter.

This project has been made possible thanks to support received from the players of People’s Postcode Lottery.

Plastic in the Thames

Studies show that unless we change course, plastic production is set to double in the next 20 years and quadruple by 2050; by 2050 there could be 12 billion metric tonnes of plastic waste in the natural environment or landfills.

Microplastics – very tiny plastic particles that come from degraded plastics and synthetic clothing – can be toxic to wildlife and fragile ecosystems and represent a vast proportion of the plastics that flow directly from our rivers out into the sea.

Greenpeace is calling on the UK government to set new legally binding targets in the forthcoming Environment Bill to radically reduce single-use plastic. Greenpeace is also calling for an independent environmental watchdog to ensure that these and other vital targets are met.

‘Thanks to Blue Planet II, we’ve all seen the devastating impact plastic is having on marine life all over the world. These pictures now show that our plastic crisis is also affecting our wildlife much closer to home. It’s a heartbreaking thought but plastic is gradually becoming as much a feature of British rivers as willows and reeds. And this is just the plastic pollution that’s visible to the naked eye.

‘Over 70,000 people have already signed a petition asking the government to set and properly enforce targets to reduce throwaway plastic which would help to restore our nature. Our investigation into plastic pollution in Britain’s major rivers will gather scientific and photographic evidence to make sure the government listens.’

‘These photographs reveal yet another side to the growing problem of plastics pollution. Threats to marine wildlife are now well known, but these shocking photographs show that many of our best-loved freshwater species are also suffering the consequences of our wasteful and careless addiction to plastics. We may have dealt with much of the worst chemical pollution that impacted Britain’s rivers in the past, but as wildlife species struggle to recover, we are filling their natural habitats with plastic waste. It is vital that we focus much more scientific attention to investigating the scale of plastic contamination in our rivers and lakes, as well as much greater efforts to identify sources and stop this flow of pollution.’

Click here to find out more about the first UK-wide investigation into river plastic pollution.