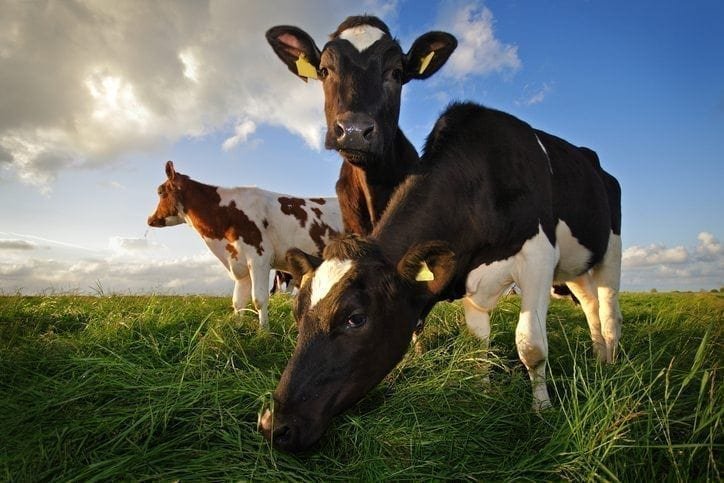 New research suggests that plants growing in warmer conditions increase the levels of methane produced by the animals that eat them.

Plants in warmer environments are tougher, which means they’re harder to digest. They also have lower nutritional value to grazing livestock, potentially inhibiting milk and meat yields. As a result these plants increase the volume of methane released by the animals.

Methane is a potent greenhouse gas that’s around 25 times better at trapping heat than carbon dioxide.

More than 95% of the methane produced by cows comes from their breath through eructation (belching) as they ‘chew the cud’.

‘The vicious cycle we are seeing now is that ruminant livestock such as cattle produce methane which warms our planet. This warmer environment alters plants so they are tougher to digest, and so each mouthful spends more time in the animals’ stomach, producing more methane, further warming the planet, and the cycle continues. We need to make changes to livestock diets to make them more environmentally sustainable.’

There are several reasons why rising temperatures may make plants tougher for grazing livestock to digest. Plants have adaptations to prevent heat damage; they can flower earlier or develop thicker leaves and, in some cases, tougher plants can invade into new areas, replacing more nutritious species. All of these adaptations make grazing more difficult.

This is a pressing concern, as climate change is likely to create a warmer environment that makes plants tougher for grazing cattle, increasing the amount of methane the animals breathe out into the atmosphere.

The researchers mapped out regions that will see the greatest increase in methane produced by cattle as a result of reductions in the nutritional quality of plants.

Methane production is generally expected to increase all around the world, with hotspots identified in North America, Central and Eastern Europe and Asia, where the effects of climate change may be the most severe.

Many of these regions are where livestock farming is growing most rapidly. For example, meat production has increased annually by around 3.4% across Asia, compared with a more modest 1% increase across Europe.

‘Now is the time to act, because the demand for meat-rich diets is increasing around the world. Our research has shown that cultivating more nutritious plants may help us to combat the challenges of warmer temperatures. We are undertaking work at Kew to identify the native forage plants that are associated with high meat and milk production and less methane, attempting to increase their presence on the grazing landscape.

‘We are also developing our models to identify regions where livestock are going to be exposed to reductions in forage quality with greater precision. It is going to be important to put plans in place to help those countries exposed to the most severe challenges from climate change to adapt to a changing world.’

Meat production’s on the rise

Grazing lands have expanded to support this production, particularly across Asia and South America, and now cover 35 million km2 – 30% of the Earth’s ice-free surface.

However, livestock are valuable. They are worth in excess of $1.4 trillion to the global economy and livestock farming sustains or employs 1.3 billion people around the world.

The upward trend in livestock production and associated GHG emissions are projected to continue in the future and global stocks of cattle, goats and sheep are expected to reach 6.3 billion by 2050.

If these rises are to continue then the researchers say that it will be necessary to limit the growth of livestock farming in the most rapidly warming regions, if significant losses in livestock production efficiency and increases in methane emissions are to be avoided.

The research is published by scientists at the Royal Botanic Gardens, Kew, Scotland’s Rural College (SRUC) and the Senckenberg Biodiversity and Climate Research Centre, Frankfurt.

Click here to read the paper, ‘Forage quality declines with rising temperatures, with implications for livestock production and methane emissions’.