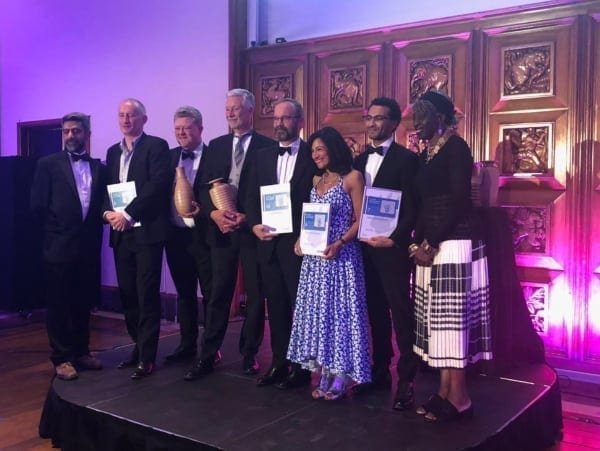 The index, co-created and co-curated by BRE and Sustain Worldwide, has been created to raise awareness of modern slavery and labour exploitation while recognising the key influencers who are supporting its eradication.

The index is based on the combination of influence on social media, as measured by Kred scores, and advocacy – policy input, speaking and media engagement – in public life, which is evaluated by desk research.

A pioneer in ethical business

Safia Minney MBE is founder of People Tree and managing director of ethical footwear brand Po-Zu. She has been a pioneer in ethical business and a campaigner for corporate accountability and eco-friendly lifestyle for more than 30 years, here and in Japan.

At the heart of everything Safia has done has been a creative force and passion to deliver social impact, human rights and sustainability. Safia is author of nine books, including Slave to Fashion, which exposes modern slavery in the fashion industry.

The rankings were announced on 26 September by Baroness Young of Hornsey OBE at a Recognition Dinner held at RIBA, Central London.
Safia Minney addressed more than 100 of her fellow influencers and guests at the Recognition Dinner. She said she was ‘honoured’ to be recognised as having influence as part of this movement against modern slavery.

‘We must all stand up for what is just and decent as human beings’, Safia said. ‘For me, it’s been a personal journey of 30 years, and through the generations, as my great grand-mother was a bonded labourer in a sugar plantation. My passion and anger comes from seeing the violence and institutional corruption that silences, exploits and abuses human beings. Our legal systems are largely dysfunctional in the developing world, where private security forces vastly out-number the police, who are in any case often corrupt. Victims of human trafficking, child labour and forced and bonded workers rarely have recourse to the law or safe haven.’

In 2017, 5,145 potential victims were referred to Britain’s National Referral Mechanism, a 35% increase on the previous year. The UK Government has estimated there are between 10,000-13,000 people held in modern slavery in Britain today.

The Global Slavery Index has estimated there are 45.8 million people across 167 countries in modern-day slavery.

‘I’ve dedicated my life to proving Fair Trade and ethical business is economically possible. We all say that slavery is abhorrent, shocking and disgraceful, but we continue to buy products and services that are clearly made by people in slavery. The middle and professional classes are absolutely complicit in this. They can afford to buy and support Fair Trade and ethical brands and help create a level playing field, so these better brands like People Tree and Po-Zu can thrive and continue to set the agenda for change.

‘We need to overhaul international trade. We need import controls for companies where there is not credible evidence that their workers and sub-contractors’ workers are paid the local living wage. People around the world care and have worked tirelessly to build and be part of the Fair Trade and organic movement, but now we need effective policy from the UK and
other governments.’

Click here to view the full range of ethical footwear on Po-Zu.com, and enjoy a 25% discount during Global Action Week 2018.