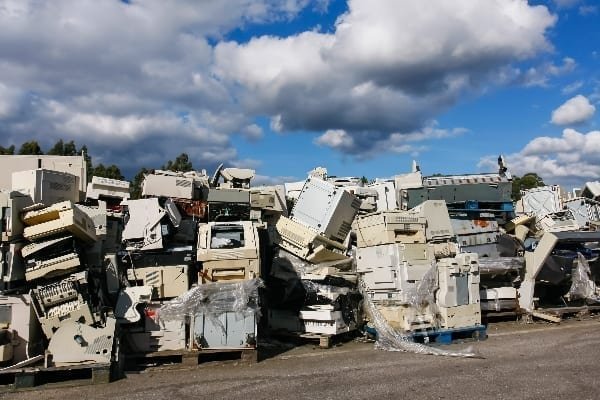 A survey of 5,000 UK householders found that the majority of Brits don’t attempt to fix perfectly repairable appliances – creating thousands of tonnes of unnecessary waste every year.

Of the 1.4 million tonnes of e-waste binned in the UK every year, more than 70% is unaccounted for – either ending up in landfill, flytipped or contributing to international waste crime. This means Britain’s throwaway culture is having a catastrophic impact on the environment.

15kg of e-waste each per year

The research, undertaken by online spare parts retailer eSpares, revealed that consumers prefer to simply throw away their broken appliances, replacing them with new models and often ignoring the environmental implications.

Over-55s were highlighted as the worst culprits, being the most likely age group to dispose of broken appliances. High-income families were also identified as a key contributor to e-waste, with fewer than one in five likely to attempt a fix.

‘With the headlines dominated by ocean plastics, e-waste has seemingly slipped under the radar. However, with every UK resident creating almost 15kg of e-waste per annum (a collective national weight 100 times heavier than the Eiffel Tower) it’s a terrifying issue that we can’t continue to ignore.’

While the research has sent alarm bells ringing, eSpares believes that there is a simple and effective solution. In fact, estimations show that by repairing just 10% of fixable appliances, it would be possible to prevent almost 100,000 tonnes of e-waste from being unnecessarily thrown away each year.

‘Curbing e-waste is easier than you may think’, said eSpares’ Ad Casey. ‘Fixing appliances is quick, cheap and the more logical solution than relying on landfill.’

To inspire a national change towards disposing of e-waste, eSpares has launched #FixFirst – an initiative that provides householders with comprehensive information on how to fix appliances and help protect the environment.

The company’s Advice Centre features more than 500 ‘how to’ videos, 700 fault fix articles and 9,000 appliance manuals, all of which help consumers to fix – not throw away.

Click here to find eSpares advice on how to fix appliances.