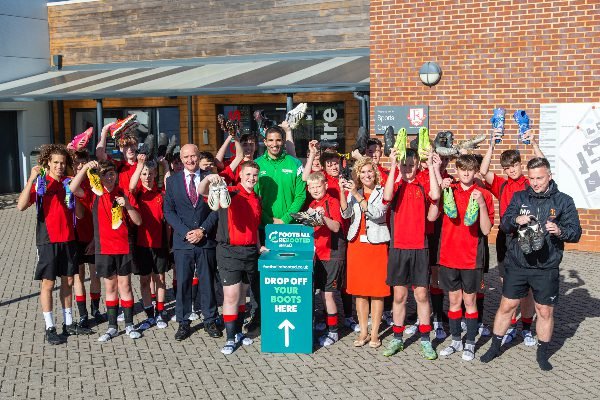 Primary and secondary schools across the UK will start to collect quality football boots today (25 October) as part of football’s biggest ever environmental campaign – Football Rebooted.

After an impressive kick-off back in May 2021, the successful ‘Football Rebooted’ campaign has already collected and reallocated thousands of pairs of quality football boots, saving hard-pressed families a small fortune and helping to reduce carbon emissions.

‘Every pair of football boots reused is equivalent to avoiding the carbon footprint of around five school runs completed in a standard, non-electric car.

‘It’s this sort of carbon-offsetting that can have a truly positive impact on the environment, and there are many more free ways we can make change. Utilita’s Energy High 5 advice has educated 3.8 million homes on free and simple ways to cut energy usage, and emissions, by 11%.’

The ‘donate and claim’ campaign enables anyone with spare football boots or astro boots to request a freepost ‘boot bag’ to donate their boots.

The boots will appear at one of many claim stations that will pop up in parks, training grounds and at some of the UK’s largest football clubs.

Premium pairs of the ‘most wanted’ retro boots and former and current players’ boots and other items will also be in the mix, giving anyone a chance to come along and grab a pair to be proud of.

The campaign is strategically designed to put an aspirational spin on a mechanic that will get good boots through to families struggling to afford new ones.

Utilita’s State of Play report revealed that out of the 74% of families who had been impacted financially by the pandemic, 18% won’t be able to send their kids back to grassroots football as they can’t afford boots and other items such as goalie gloves and shin pads.

Campaign ambassador and keen environmentalist David James joined the Utilita team for focus groups with families, which revealed the barriers to boots finding new homes – the biggest being pride.

The donate and claim mechanic avoids families needing to accept charity from people they know, and makes claiming a new pair an aspirational activity, whereby people are impacting the environment, too.

‘It was great to return to my former school to officially open the Football Rebooted schools collection campaign. Right now, there are millions of pairs of football boots that people have grown out of or replaced, and we need to make sure they don’t end up in landfill. Getting these boots replayed through will not only save families a few quid but will also act as an important reminder about the power of upcycling and reusing items that still have a lot of life left in them.’

Premier League and EFL clubs across the UK, including Portsmouth, Southampton, Derby County and Leeds United, and the England team from Soccer Aid have already signed up to donate football boots in the interests of the environment.

As part of the new campaign schools can request boots be sent to them for children who they identify as needing football boots to enable them to play in or outside of school.

‘The pandemic has made life much harder for so many families, so it’s great to know that hundreds of our pupils’ boots will go on to be worn again.

‘We’re extremely proud to have such high-achieving alumni such as David James MBE, who, with his green lifestyle credentials is so well-placed to launch football’s biggest ever environmental movement throughout the nation’s schools. We envisage this campaign seeing excellent engagement for many years to come.’