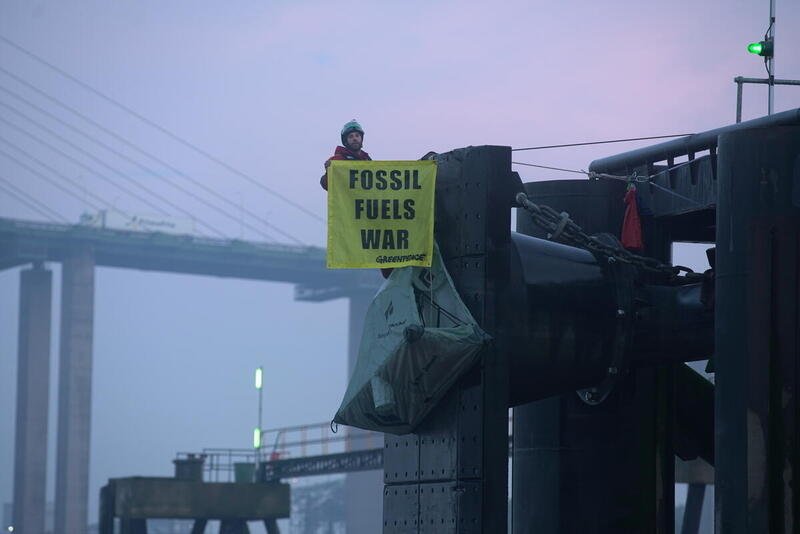 A tanker carrying a 33,000-tonne shipment of Russian diesel has been forced to U-turn in the Thames, after a Greenpeace protest against the UK government continuing to let fossil fuel money flow to Putin.

Eluding security, 12 Greenpeace volunteers reached the Andromeda tanker’s intended berth at Navigator Terminals by boat late on Sunday 15 May and climbed on it.

Images from a vessel-tracking website show the tanker being turned around in the Thames shortly after the activists were in position.

In the early hours of yesterday morning (Mon 16) police began making arrests. But several protesters remained in place, with one activist on the offloading pipes, another hanging off the jetty and others occupying the jetty preventing the tanker from docking. They have unfurled a banner reading ‘OIL FUELS WAR’.

Using Greenpeace’s Russian Tanker Tracker protesters were able to monitor the shipment, which was due to offload at 23.59 Sunday May 15, and occupy the jetty just as the 183-metre-long vessel was coming in.

Campaigners are calling on the UK government to stop funding Putin and Russia’s war in the Ukraine and end our fossil fuel dependence.

Greenpeace research published at the end of April showed the UK has imported nearly two million barrels of Russian oil, worth an estimated £220 million, since the start of the war. More has arrived since then.

‘The UK’s attachment to fossil fuels has backfired in the worst way possible – we’re funding a war, our energy bills and fuel costs are sky-high, and we’re driving the climate crisis. It has to stop.

‘Putin invaded Ukraine nearly three months ago, and yet fossil fuel money from the UK is still funding his war chest. Ministers have kicked a ban on Russian oil imports to the end of the year despite strong public support for it.

‘To stand up to Putin, bring bills down and tackle climate change, the Prime Minister must get us off fossil fuels as fast as possible, stop ludicrous energy waste from our substandard draughty homes, and prioritise cheap, clean, homegrown renewable power.’

Countries around the world are taking action to reduce their reliance on Russian fossil fuels as a way to sanction Putin for attacking Ukraine.

The UK has declared a ban on the arrival of Russian-flagged and Russian-owned vessels, but Russian fossil fuels are still arriving via ships registered to other countries.

The Andromeda tanker travels under a Greek flag, but is carrying fuels from the Russian port of Primorsk, supplied by the LLC KINEF refinery. The company buying the fuel is energy and commodities trader Vitol.

The Greenpeace tracker makes it possible to see when tanker shipments of fossil fuels are leaving Russia, and when they’re set to arrive in ports in the UK and around the world.

Greenpeace activists have been using the tracker to protest shipments of Russian fossil fuels in the US, Denmark, Sweden, Poland, Belgium, Spain and the Baltic Sea.

The arrival of Russian gas has already encountered strong opposition in the UK. In March a tanker was diverted from Kent after dockers in the Unison trade union refused to unload it.

Soon afterwards Shell had to apologise over its decision to purchase a shipment of Russian crude at a discounted price, later pledging to stop buying oil from the country.

Ending our reliance on fossil fuels

The UK currently relies on Russia for 5% of its gas imports, 8% of oil imports and 18% of its diesel.

Business Secretary Kwasi Kwarteng pledged to phase out the import of Russian oil by the end of the year. Transport Secretary Grant Schapps has announced a 10-fold expansion in charging points for electric vehicles by 2030, but the AA has warned that action was needed on the lack of charging points in rural areas.

In addition to closing the loophole in government sanctions that allows Russian fossil fuels to continue entering the UK, Greenpeace is also calling for the government to end the UK’s dependence on fossil fuels all together, to meet our climate change obligations under the Paris Agreement, stop the flow of money to Vladamir Putin and also reduce soaring energy bills at the same time.