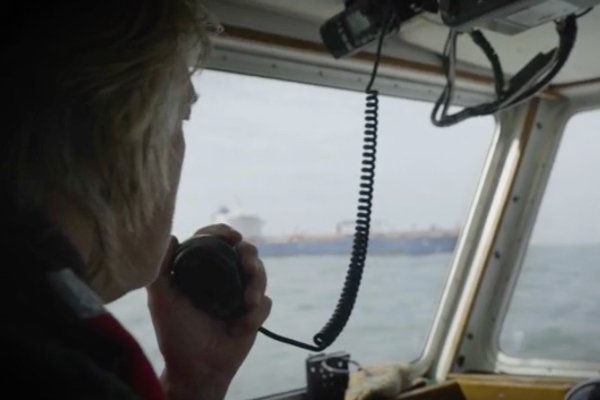 Metal structure in the Xingu River, near the Belo Monte dam. © Cícero Pedrosa Neto/Amazônia RealGreenpeace UK has confronted a 183m-long oil tanker carrying a 42,000-tonne shipment of Russian fuel oil to the Port of Immingham in Lincolnshire, demanding that the vessel turn around and the shipment be returned to Russia.

The oil tanker’s captain admitted that it was carrying Russian cargo and acknowledged that it was helping to fuel the war in Ukraine.

The Seavictory was approached by Greenpeace UK’s boat, the Sea Beaver, carrying a banner reading ‘OIL FUELS WAR’, on Tuesday (12 April) afternoon, while it was at anchor near the Humber Estuary waiting for a pilot to bring it into dock.

When asked over the radio what the origin of the Seavictory’s cargo was, the captain replied ‘Tuapse, Russia’.

When quizzed further over whether the captain or crew were aware that the oil it was carrying was fuelling the war in Ukraine. The captain replied, ‘Yes sir, that is correct. However, this is an order from the company so I just follow the directions’.

Using Greenpeace’s Russian Tanker Tracker, activists were able to monitor the shipment and confront the tanker before it was able to unload the fossil fuels it is carrying.

Campaigners are calling on the UK government to stop funding Putin and Russia’s war in the Ukraine by bringing in an immediate ban on all Russian fossil fuel imports.

‘The UK’s attachment to fossil fuels is backfiring in the worst way possible – we are funding a war, our energy bills and fuel costs are sky-high, and we’re driving the climate crisis. It has to stop.

‘Putin invaded Ukraine almost two months ago, yet fossil fuel money is still funding his war chest from the UK because our sanctions aren’t worth the paper they’re written on and still allow Russian shipments to arrive.

‘Every Russian import funds an increasingly deadly war. Until the UK government implements an explicit and immediate ban on Russian oil and gas, it will continue to have Ukrainian blood on its hands.’

Pressure has been mounting on countries to reduce their reliance on Russian fossil fuels as a way to sanction Putin for attacking Ukraine.

Last weekend, Putin’s former chief economic adviser said that a ‘real embargo’ on oil and gas exports from Russia could stop the war in Ukraine.

The UK has declared a ban on the arrival of Russian flagged and Russian owned vessels, but Greenpeace has described current sanctions as ‘tokenistic’ as the UK is still importing Russian oil and gas via ships registered to other countries.

Russian fossil fuel exports make up 60% the country’s exports and 40% of the Kremlin’s federal reserves. By continuing to import fossil fuel from Russia, the UK government is funding the war in Ukraine.

The Seavictory tanker travels under a Maltese flag, but is carrying fuels from the Russian port of Tuapse. The oil it is carrying is thought to be destined for the Lindsay oil refinery, owned by The Prax Group.

The Greenpeace tracker makes it possible to see when tanker shipments of fossil fuels are leaving Russia, and when they’re set to arrive in ports in the UK and around the world.

Greenpeace activists have been using the tracker to protest shipments of Russian fossil fuels in the US, Denmark, Sweden, Poland, Belgium, Spain and the Baltic Sea.

There have been over 20 Greenpeace actions against Russian fossil fuel shipments since the war began across Europe and the US.

In addition to closing the loophole in government sanctions that allows Russian fossil fuels to continue entering the UK, Greenpeace is also calling for the government to end the UK’s dependence on fossil fuels all together.

Reducing the UK’s dependency on oil and gas by wasting less energy and rolling out a nationwide programme to insulate homes, switch to low-carbon heating and scale up renewable energy production is the only way to stop the flow of money to Vladamir Putin, reduce soaring energy bills and meet our legally binding targets to cut emissions and tackle climate change.