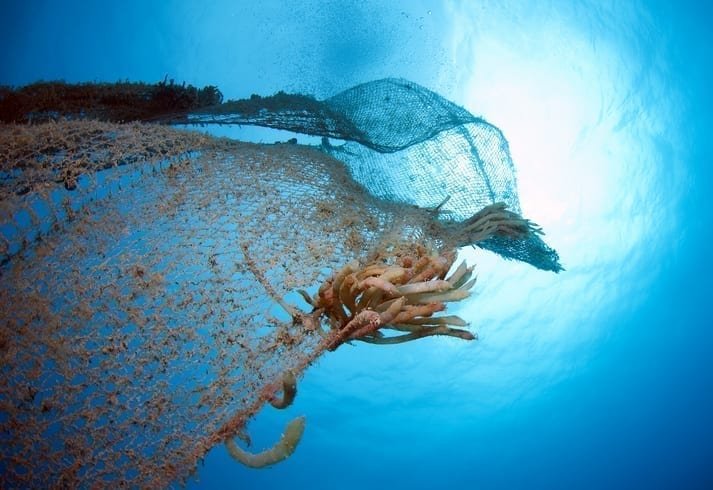 A new Greenpeace report warns of the dangers posed to our oceans by ‘ghost gear’, fishing equipment abandoned or lost at sea, much of which is made of plastic.

An estimated 640,000 tonnes of ghost gear enters the ocean every year, equivalent to the weight of 50,000 double-decker buses.

Ghost gear makes up 10% of all plastic waste in our oceans, and 86% of ‘megaplastics’ in the Great Pacific Garbage Patch are fishing nets.

The report, Ghost Gear: the abandoned fishing nets haunting our oceans, gathers the most up-to-date scientific literature on the subject and highlights the scale of the problem.

Ghost gear is the most deadly type of ocean plastic pollution because it was specifically designed to catch and kill marine life, which it continues to do years after first being lost or abandoned.

‘Ghost gear is a major source of ocean plastic pollution, and it affects marine life in the UK as much as anywhere else. Just this month, a pregnant whale was discovered tangled in ‘ghost gear’ in Orkney and seabirds on Mullion Island, a seabird sanctuary, were found to have been ingesting ghost gear.

‘The UK’s waters do not exist in a vacuum as oceans have no borders. The world’s governments must take action to protect our global oceans, and hold the under-regulated fishing industry to account for its dangerous waste. This should start with a strong Global Ocean Treaty being agreed at the United Nations next year.’

The report shows that 6% of all nets, 9% of all traps and 29% of all longlines remain as pollution at sea.

Poor regulation and slow political progress in creating ocean sanctuaries has allowed ghost gear to relentlessly accumulate in the world’s oceans. Ghost gear is costly, challenging and dangerous to clean up.

The report comes while the Greenpeace ship, Arctic Sunrise, is documenting Mount Vema, a seamount in the Atlantic where the remnants of past fishing efforts can still be found in the form of deadly traps and nets.

Greenpeace is calling on the United Nations to agree an ambitious Global Ocean Treaty by spring 2020, which provides a comprehensive framework for marine protection.

This would pave the way for the creation of a global network of ocean sanctuaries covering 30% of the world’s oceans by 2030, and help marine life to recover from the many pressures they are facing, like plastics and ghost gear.

Click here to read our article on the truth about plastic in the ocean.