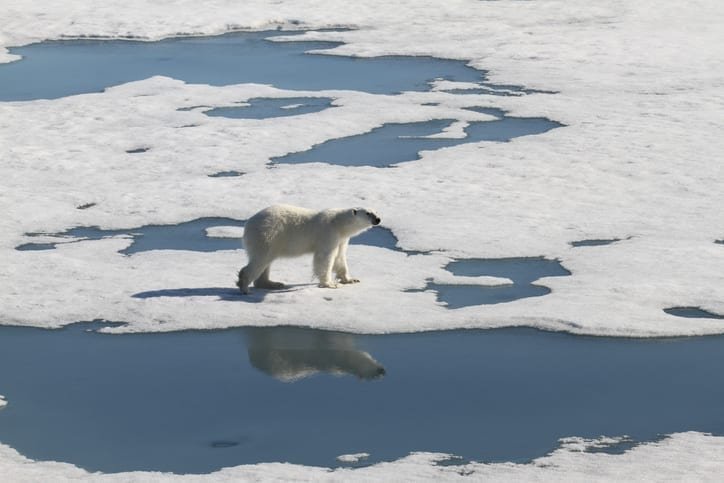 The long-term warming trend has continued in 2018, with the average global temperature set to be the fourth highest on record. The 20 warmest years on record have been in the past 22 years, with the top four in the past four years, according to the World Meteorological Organization (WMO).

Other tell-tale signs of climate change, including sea level rise, ocean heat and acidification and sea-ice and glacier melt continue, while extreme weather left a trail of devastation on all continents. These are the conclusions of the WMO provisional Statement on the State of the Climate in 2018, which includes details of impacts of climate change based on contributions from a wide range of United Nations partners.

The report shows that the global average temperature for the first 10 months of the year was nearly 1°C above the pre-industrial baseline (1850-1900). This is based on five independently maintained global temperature data sets.

‘We are not on track to meet climate change targets and rein in temperature increases. Greenhouse gas concentrations are once again at record levels and if the current trend continues we may see temperature increases 3-5°C by the end of the century. If we exploit all known fossil fuel resources, the temperature rise will be considerably higher.

The Intergovernmental Panel on Climate Change (IPCC) special report on Global Warming of 1.5°C reported that the average global temperature for the decade 2006-2015 was 0.86°C above the pre-industrial baseline. The average increase above the same baseline for the most recent decade 2009-2018 was about 0.93°C and for the past five years, 2014-2018, was 1.04°C above the pre-industrial baseline.

The WMO report adds to the authoritative scientific evidence that will inform UN climate change negotiations from 02-14 December in Katowice, Poland. The key objective of the meeting is to adopt the implementation guidelines of the Paris Agreement on Climate Change, which aims to hold the global average temperature increase to as close as possible to 1.5°C.

The IPCC report on Global Warming of 1.5°C said that this target was physically possible but would require unprecedented changes in our lifestyle, energy and transport systems. It showed how keeping temperature increases below 2°C would reduce the risks to human well-being, ecosystems and sustainable development.

National meteorological and hydrological services have been contributing to national climate assessments. A new US federal report detailed how climate change is affecting the environment, agriculture, energy, land and water resources, transportation and human health and welfare, with a risk that it will lead to growing losses to American infrastructure and property and impede the rate of economic growth over this century.

A UK assessment published on 26 November warned summer temperatures could be up to 5.4°C hotter and summer rainfall could decrease by up to 47% by 2070, and sea levels in London could rise by 1.15m by 2100.

A Swiss report on climate scenarios released on 13 November said that Switzerland is becoming hotter and drier, but will also struggle with heavier rainfall in the future and its famed ski resorts will have less snow.

State of the climate

2018 started with a weak La Niña event, which continued until March. By October, however, sea-surface temperatures in the eastern Tropical Pacific were showing signs of a return to El Niño conditions, although the atmosphere as yet shows little response. If El Niño develops, 2019 is likely to be warmer than 2018.

In 2017, carbon dioxide, methane and nitrous oxide concentrations reached new highs, according to WMO Greenhouse Gas Bulletin. Data from a number of locations, including Mauna Loa (Hawaii) and Cape Grim (Tasmania) indicate that they continued to increase in 2018.

The oceans absorb more than 90% of the energy trapped by greenhouse gases and 25% of anthropogenic CO2 emissions, making them warmer and more acidic. For each three-month period until September 2018, ocean heat content was the highest or second highest on record. Global Mean Sea Level from January to July 2018 was around 2 to 3 mm higher than the same period in 2017.

Arctic sea-ice extent was well below average throughout 2018 with record-low levels in the first two months of the year. The annual maximum occurred in mid-March and was the third lowest on record. The minimum extent in September was the sixth smallest on record, meaning that all 12 smallest September extents have been in the past 12 years. Antarctic sea-ice extent was also well below average throughout 2018. The annual minimum extent occurred in late February and was ranked as one of the two lowest extents.

The number of tropical cyclones was above average in all four Northern Hemisphere basins, with 70 reported by 20 November, compared with the long-term average of 53, leading to many casualties. The Northeast Pacific basin was especially active, with an Accumulated Cyclone Energy that was the highest since reliable satellite records began.

Two of the strongest tropical cyclones were Mangkhut, which impacted the Philippines, Hong Kong SAR and China, and Yutu, which brought devastation in the Mariana Islands. Jebi was the strongest typhoon to hit Japan since 1993, Son-Tinh caused flooding in Viet Nam and Laos, whilst Soulik contributed to flooding on the Korean peninsula.

‘The evidence, if we needed any more, continues to stack up. The record-high heatwaves, record-low Arctic sea ice, above average tropical cyclones and deadly wildfires are an alarm bell impossible to ignore. We’re in the midst of a climate crisis and this meteorological report spells out the worsening threat in startling clarity. It’s no longer our future that is in peril; our today is at risk.

‘The recent IPCC report also showed that we still have hope. We have 12 years to move the needle and any leader who comes to COP24 unprepared to step up and take action needs to read the WMO report and understand it’s time to stop talking and start acting on climate – while we still have the chance.’

Hurricanes Florence and Michael were associated with huge economic damage and considerable loss of life in the United States. Gita, in the South Pacific, was the most intense and most expensive cyclone to ever hit Tonga.

In August, the southwest Indian state of Kerala suffered the worst flooding since the 1920s, displacing more than 1.4 million people from their homes and affecting more than 5.4 million.

Large parts of western Japan experienced destructive flooding in late June and early July, killing at least 230 people and destroying thousands of homes. Flooding affected many parts of east Africa in March and April. This included Kenya and Somalia, which had previously been suffering from severe drought, as well as Ethiopia and northern and central Tanzania. An intense low-pressure system in the Mediterranean Sea in late October brought flooding, high winds and loss of life.

Large parts of Europe experienced exceptional heat and drought through the late spring and summer of 2018, leading to wildfires in Scandinavia. In July and August, there were numerous record high temperatures north of the Arctic Circle, and record long runs of warm temperatures, including 25 consecutive days above 25 °C in Helsinki (Finland).

Parts of Germany had a long spell of days above 30°C, whilst a heatwave in France was associated with a number of deaths. It was also an exceptionally warm and dry period in the United Kingdom and Ireland. A short but intense heatwave affected Spain and Portugal in early August.

Eastern Australia experienced significant drought during 2018, especially New South Wales and southern Queensland, with much of the region receiving less than half its average rainfall for the period from January to September. Severe drought affected Uruguay, and northern and central Argentina, in late 2017 and early 2018, leading to heavy agricultural losses.

Both Japan and the Republic of Korea saw new national heat records (41.1 °C and 41.0°C respectively). Oman reported one of the highest known minimum overnight temperature of 42.6 °C in June. Algeria saw a new national of 51.3 °C in July.

One of the most significant cold outbreaks of recent years affected Europe in late February and early March.

Major wildfires affected Athens (Greece) on 23 July, with many fatalities. British Columbia in Canada broke its record for the most area burned in a fire season for the second successive year. California suffered devastating wildfires, with November’s Camp Fire being the deadliest fire in over a century for the USA.

The provisional statement contained details of impacts of climate change, based on contributions from the Food and Agriculture Organization (FAO), International Organization for Migration (IOM), UN Environment Programme (UNEP), UNESCO’s Intergovernmental Oceanographic Commission (IOC), UN High Commission for Refugees UNHCR) and World Food Programme (WFP). This section will be expanded in the final statement, to be released in March 2019.

Exposure of agriculture sectors to climate extremes is threatening to reverse gains made in ending malnutrition. New evidence shows a rise in world hunger after a prolonged decline.

In 2017, the number of undernourished people was estimated to have increased to 821 million, according The State of Food Security and Nutrition in the World 2018 by FAO, WFP, the International Fund for Agricultural Development, the UN Children’s Fund and the World Health Organization.

Africa is the region where climate events had the biggest impact on acute food insecurity and malnutrition in 2017, affecting 59 million people in 24 countries and requiring urgent humanitarian action. Much of the vulnerability to climate variability is associated with the dryland farming and pastoral rangeland systems supporting 70–80% of the continent’s rural population.

Out of the 17.7 million Internally Displaced Persons tracked by the IOM, 2.3 million people were displaced due to disasters linked to weather and climate events as of September 2018. In Somalia, some 642 000 new internal displacements were recorded between January and July 2018 by UNHCR, with flooding the primary reason for displacement (43%), followed by drought (29%), and conflict (26%).

UN agencies including UNESCO-IOC and UNEP are tracking environmental impacts associated with climate change include coral bleaching, reduced levels of oxygen in the oceans, loss of ‘Blue Carbon’ associated with coastal ecosystems such as mangroves and salt marshes.

Climate change also exposes peatlands currently protected by permafrost to thawing and possible increased methane emissions and loss of carbon, and the associated sea-level rise increases the risks of coastal erosion and salination of freshwater peatlands.

Click here for 5 simple lifestyle changes you can make today for you, your family and the planet.