Sally Phillips used to work as an ecologist specialising in bat and owl surveys. ‘It was interesting work that took me to lots of gorgeous rural parts of Cumbria’, Sally told us, ‘and it has been nice to start working with bats and wildlife again on a voluntary basis.’

While working as a volunteer, Sally received countless calls from people who had a bat flying around the house; all the doors and windows were closed, so the only way the bat could have got in was down the chimney.

‘This made me aware of how many open chimneys there are’, Sally explains; ‘it’s like having a window open all the time. I’ve always had an interest in environmental issues and it seemed to be a problem that so many homes with open chimneys were wasting household heat.’ 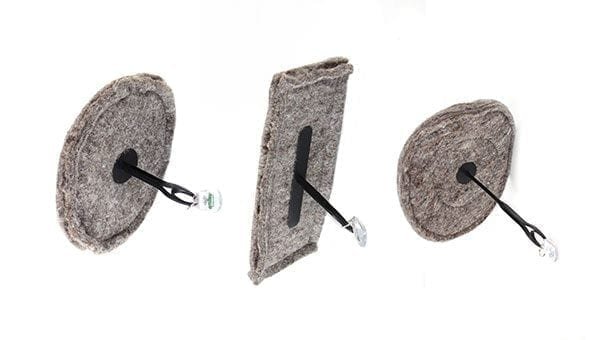 The problem Sally spotted is no small one: research by the University of Liverpool reveals a surprising 4% of a home’s heat is lost through the chimney, and that insulating it would be a more effective measure than floor or hot water tank insulation.

At this time of year chimney insulation is one of the most cost-effective means of saving energy and making the home more comfortable.

Sally’s solution was to invent the Chimney Sheep, a novel device that bungs the chimney with felted sheep wool, preventing heat loss and reducing cold draughts.

‘Loft insulation wool was too soft and loose’, Sally tells us. ‘I needed the wool to be firm enough to hold itself in place but soft enough to compress and fit a range of flue shapes and sizes.’

Sally’s ecology work took her to lots of farms where wool is virtually a waste product, especially the wiry Herdwick wool that turned out to have the ideal properties for the Chimney Sheep. Wool has natural insulation properties and it’s a more sustainable option than mineral wool insulation, so it seemed the obvious material for Sally to use.

Though it’s extremely low-tech, a lot of work has gone into making the Chimney Sheep as simple as possible. It consists of a double layer of thick felted Herdwick wool on a handle, which is pushed into the throat of the chimney – the narrow bit just above the fireplace. Because the ‘sheep’ is a bit bigger than the opening, it grips the sides and holds itself in place, preventing nearly 95% of airflow up the chimney.

‘Chimneys are designed to draw air out of the building and they keep on working all the time – not just when the fire is lit’, Sally explains. ‘Over 40 cubic metres of air is drawn up the chimney per hour, equating to a loss of around 4% of household heat. As well as the warm air being lost, cold air is pulled in from around doors and windows to replace it, causing the cold draughts that we feel. Blocking the chimney with a Chimney Sheep will significantly reduce a lot of other draughts around the house.’

Chimneys vary to such an extent that nine different sizes of Chimney Sheep have been developed; the cheapest is £16 while the most popular sizes cost £21, £28 and £34. ‘We also make much bigger ones for £52.50 and £65’, Sally says. ‘This largest size is 35 by 90cm – more like blocking a door than a window! If you consider that the Chimney Sheep will save 4% off the heating bill, then it should pay for itself in 6-12 months.’

With so many benefits for householders and the environment, why has chimney draught exclusion been largely ignored by the energy saving industry? ‘I don’t know!’, Sally confesses. ‘It is such an easy way of saving energy. It’s estimated that there are over 11 million homes in the UK with open chimneys, and if every one of these fitted a Chimney Sheep we’d reduce the nation’s annual carbon output by around 1%.’

Sally believes the silence on chimney insulation may be down to the fact there hasn’t been an approved product on the market. ‘Taking the product mainstream is an expensive, time-consuming and complicated process’, Sally tells us, ‘and we’re still not there yet.’

‘This sounds simple but it actually became really complicated’, Sally says. ‘The amount of energy it saves depends on how much air is lost up the chimney, and this depends on variables such as the diameter and height of the chimney, how permeable the property is, the type of heating the property uses, where in the country the property is located… We had to develop a formula that accounted for all these factors and that worked in different property types, which took a lot longer than expected.’

The other problem Sally has encountered is that, because the Chimney Sheep’s made of natural materials, additional tests had to be commissioned to demonstrate how effective it is. ‘BBA, the body that approves products for the building trade, needed to be reassured that the product would be consistent from batch to batch. We are happy to demonstrate this as we are proud of the Chimney Sheep and we want it to stand up to robust scrutiny – but it has been another hurdle to overcome.’

The next goals for Sally are to get Chimney Sheep endorsed by the Energy Savings Trust and to make sure it’s adopted by more housing associations. ‘We have worked with a few so far, with positive results, but the Chimney Sheep is a cost-effective means for tenants to save money on their heating bills so we are hoping to develop these relationships further.’

Click here to find out more about the Chimney Sheep and how to get hold of one.

How to plant for pollinators